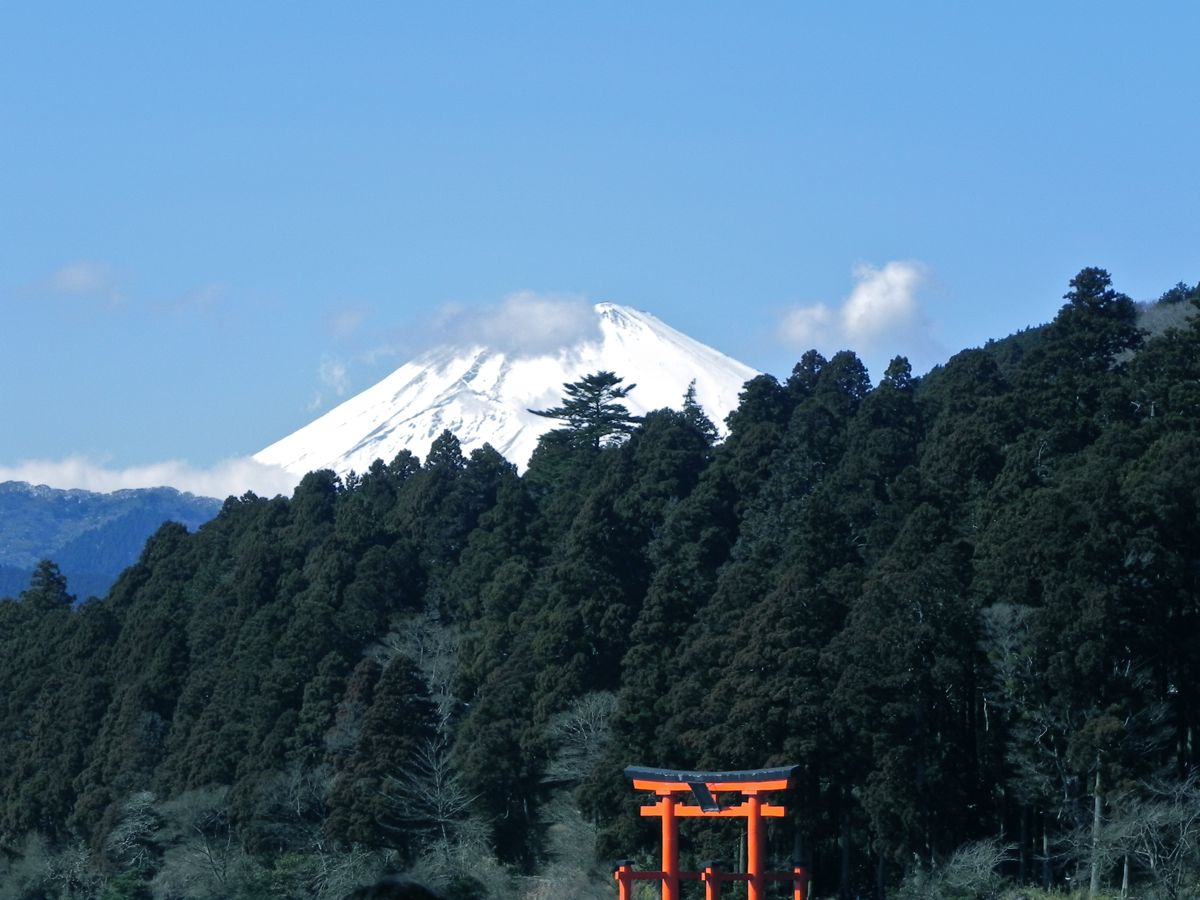 After we hiked up to the top of Owakudani we were awarded with a powerful odour! The flatulent smell of sulphur. The way up, while not exactly gruelling, was covered in snow and therefore taxed our unhealthy, un-exercised and unfit bodies a little more than usual. At the foot of the mountain the route up was sign posted as 60 minutes. It took us nearly double that. We weren’t prepared for snow, we weren’t prepared for hiking in general, and to be honest, we weren’t prepared for anything. In fact non of this was as dramatic as this introduction implies. This is all just effect to grab your attention, you see. I’m not sure what Richard and Ben were prepared for. But I’d been to Hakone thrice before and I was prepared for beauty.

Like many people my age, I am guilty of occasionally wasting my time and money on getting intoxicated on the weekends. Making myself completely hungover and (as my Dad puts it) being an oxygen thief all the following day. As I’ve gotten older my hangovers have become more intense; lasting from sun up till the following sun down. Therefore rendering me completely useless for the whole day. It doesn’t make it better when I stumble home after the sun has risen either.

Anyways… that was exactly what we had been doing for the past few weekends. We decided to call it in early on a Friday night (which is a very tough decision after a few), so that we would be sober enough to get up the next day and actually do something. The 3 of us would be leaving Japan/the area soon, and wanted to make the most of our time left. Before I downed my last drink and rushed out of the bar, we hastily made plans to meet the next day at Mishima station, 10am. As I squeezed through the closing doors of my last train, I wondered if the other two would keep to their end of the deal. And not get too pissed.

Hakone is a large touristy area in the shadow of the illustrious Mt Fuji. It consists of a beautiful lake with two european pirate ships (for some reason), nerve racking but pleasant cable cars, Owakudani with its vents of smelly sulphur and great views, and the town of Hakone itself which is a very popular onsen resort.

In the summer months this area can get pretty crowded with rooms at hotels and onsens filling up fast. Conveniently Hakone can be reached in 2 hours from Tokyo by train, or an hour from Mishima or Gotemba by bus. If time and money is of the essence, then it can also easily be seen in a day. 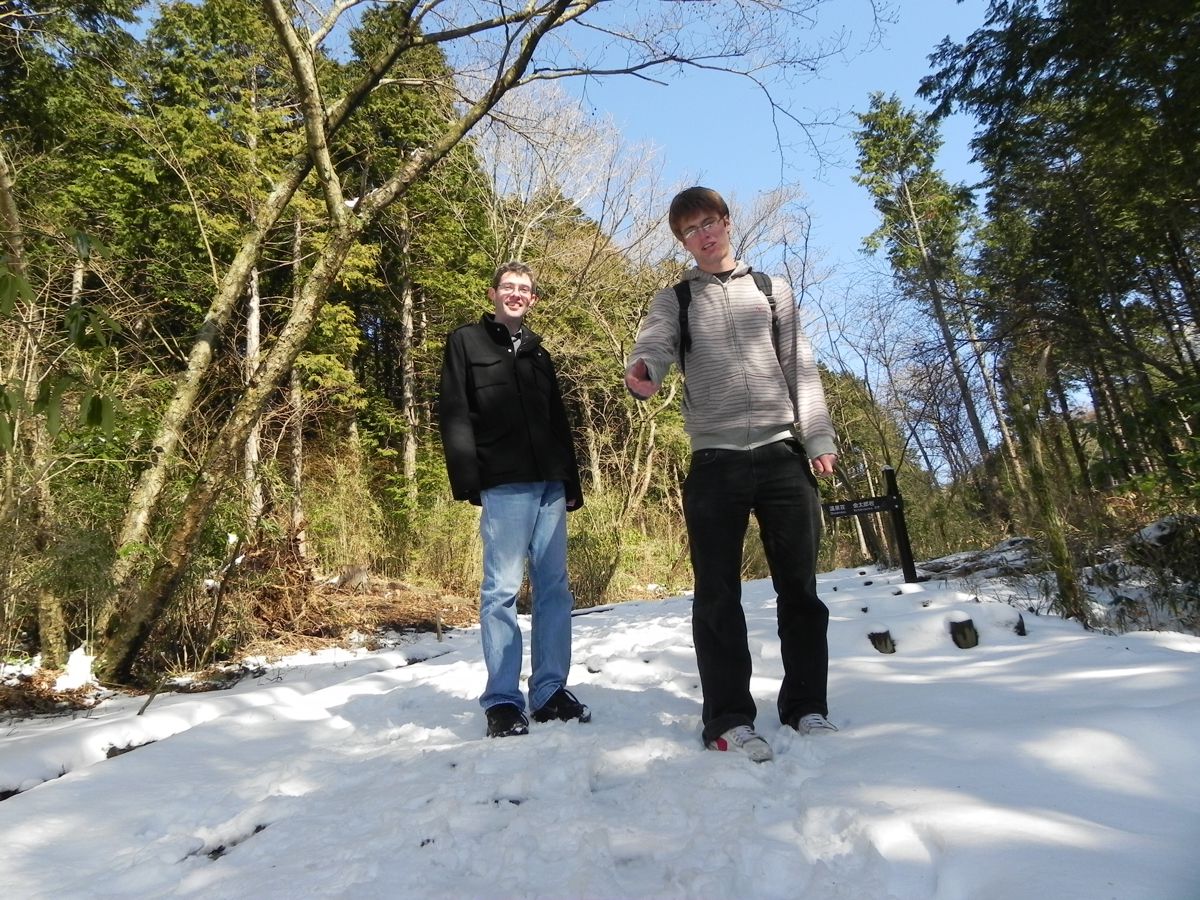 The town of Hakone is pretty small but pleasant. It boasts many restaurants and plenty of onsens. For those not in the know, an onsen is a sauna/hot water spring. They are a very popular activity in Japan with many people staying at famous resorts.  Back in 2009 three friends and myself visited an onsen in Hakone. It was kind of pricey, but definitely worth it. Before entering the hot pools (which are all different temperatures) one has to shower. This particular onsen (who’s name escapes me) was split into male and female sides, but there are many mixed sexed and family style places too. It also featured some outdoor pools. It was a great way to relax especially after a heavy night before. So popular are onsens in Japan, that they are often themed, like this one: (http://www.yunessun.com/english/yunessun.html), which has wine, and ramen (noodle) themed pools.

After filling your belly or relaxing in Hakone, it’s time to head up to the dizzying heights of Owakudani, which is an enjoyable experience in itself and involves 3 different types of transport. First hop on the winding Hakone-Tozan line up the forested hill sides. This train takes a while to reach its destination, but has some fantastically alluring views of the mountains, towns, onsens and forests as it trundles it’s way up. Next transfer on to the steep Hakone-Tozan cable car. There are only two cars operating on this line, one going up and one going down. So there can end up being a lot of people waiting for and eventually pushing themselves onto the cable car, when it arrives. You may have to stand, but it is also a charming way to travel. Once at the top, its time to take the cable car to the peak of Owakudani. No matter how many times I’ve ridden this cable car, I still have the fear of heights. I can’t help but look down at the floor as it’s pulled further and further away from me. This is a stupid thing to do, as the panoramic view is spectacular, encompassing the mountains and the sea. 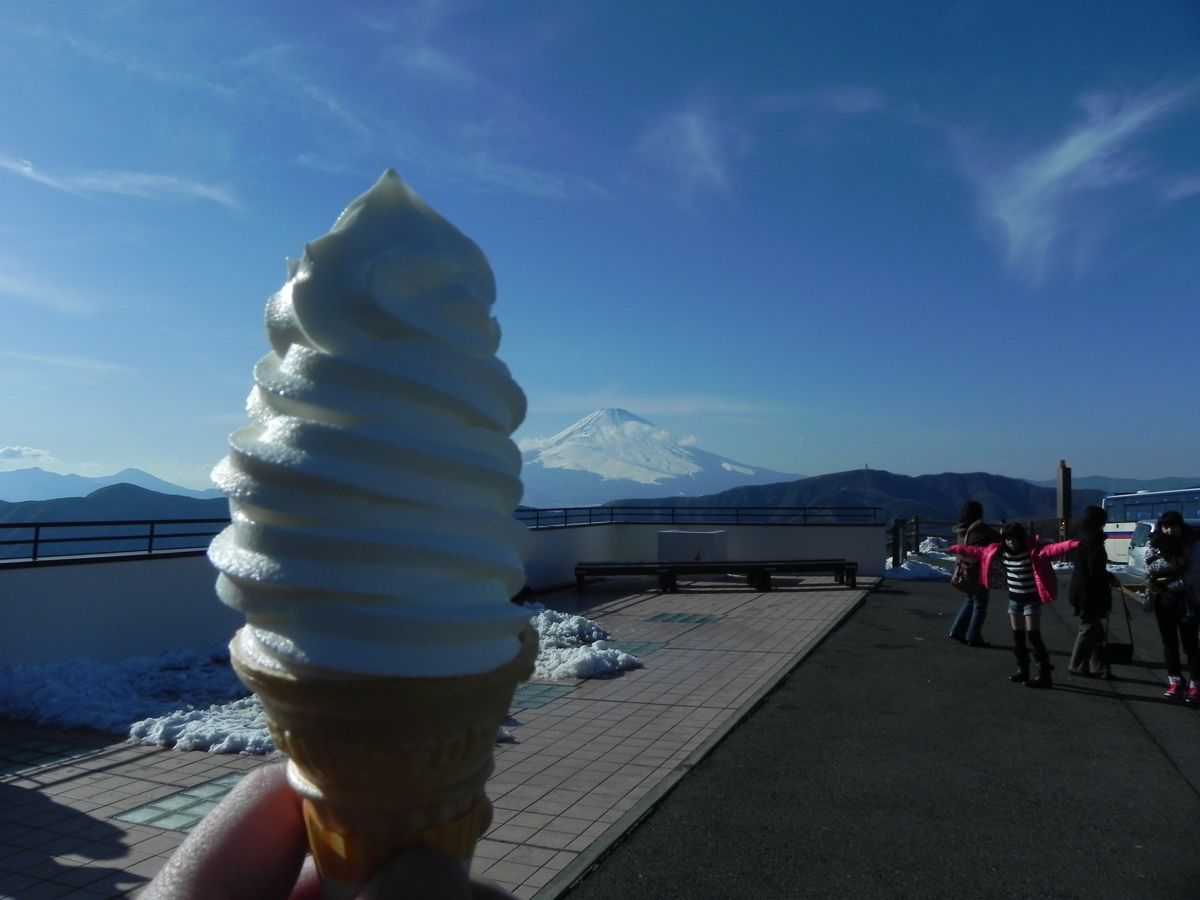 Disembarking at the top, you are hit by the penetratingly foul oder of sulphur and plenty of other tourists. Don’t let this put you off as on clear days Owakudani has one of the best views of Mt. Fuji. You can walk right up the the sulphur vents and try the special hard boiled eggs. There are plenty of restaurants and touristy gift shops. Even on cold days people flock to the ice cream shop. I personally recommend Sakura flavour.

After lovingly gazing at Mt. Fuji, the landlubbers amongst you can take to the high seas on lake Ashinoko. Before doing so however, you must either walk down the mountain or take the cable car down the other side. There are two pirate ships across the lake. They don’t stop anywhere on the way, but they do give you the chance to photograph Mt. Fuji from a windy, yet beautiful lake.

I’ve mentioned that I have been to Hakone before. So this time, I wanted to try something different, yet show my friends the sites. I awoke in good spirits due to the lack of a hangover. Ben and Richard duly met me at Mishima station in the bright early spring morning. After an hour wait, we worked out which bus to take, 40 minutes later, we were cruising across lake Ashinoko on our pirate vessel. Not wanting to make the hole in our wallets much bigger, we decided not to take the cable car up the mountain. This time we would walk. None of us got much exercise lately, so it was high time that we did. The sign at the foot of the mount said, 60 minutes to Owakudani. “Easy, let’s do it.” 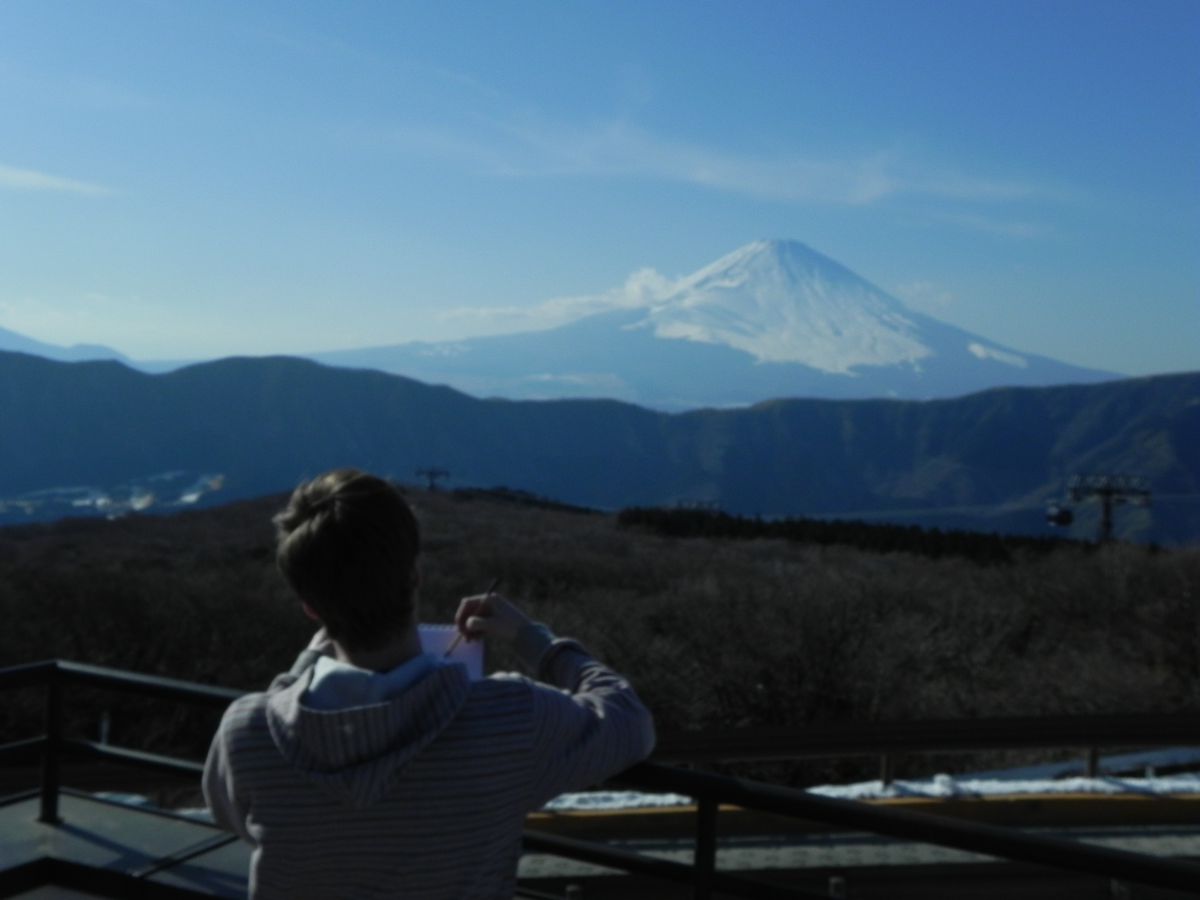 The path up the mountain was never very steep and was actually rather easy. Spring was on its way in Japan, with the Sakura flowers opening up in many places. But no one had informed Hakone of this, and was still very much in winter’s grasp. As we hiked through the snow, with Ben occasionally throwing the odd snow ball at Richard and I, we found a lone beer advert at the start of a wood. We decided to explore, as a beer sounded like a good idea, unfortunately all we found was a closed open aired restaurant. No doubt that in the summer, this would be an excellent place to refresh oneself.

We decided to continue on up the mountain were we came across another distraction. This time it was a sign pointing to “Stone Buddhas 10 meters.” One thing I really love about Japan is it’s abundant amount of picturesque temples and shrines. Adhering to our curiosity, we crossed a stone bridge and rounded a corner where we found a mini temple complex. We could hear somebody rummaging around inside the temple, but only a dog was aware of our presence. I sometimes feel awkward entering places of religious significance, because the faithful may be praying or deriving something from it, whereas I am just there taking pictures and not really understanding the meaning of anything. But this place was empty and I’ve found that Buddhist generally don’t pay much attention to tourists anyway. As promised the shrine possessed some stone Buddhas dressed in dapper red hats and shirts. Some of them were clearly very old and peacefully stood there in the snow. After enjoying the peace and tranquility for a while (but not attanting enlightenment), we headed back to the hike.

Nearing the top, we paused for a while to take in the view of Japan’s most famous mountain. It’s such an iconic symbol of Japan and is genuinely a pleasure to contemplate. Due to the distractions on the way up, we reached Owakudani an hour late and even tho we were cold, headed straight for an ice cream stall.

The usual route taken by most tourist is a very enjoyable experience. However I was proud that we decided to hike up instead. We found some great little distractions off the beaten path and it also felt good to have exercised somewhat. The climb up is really very easy actually, even in snow. 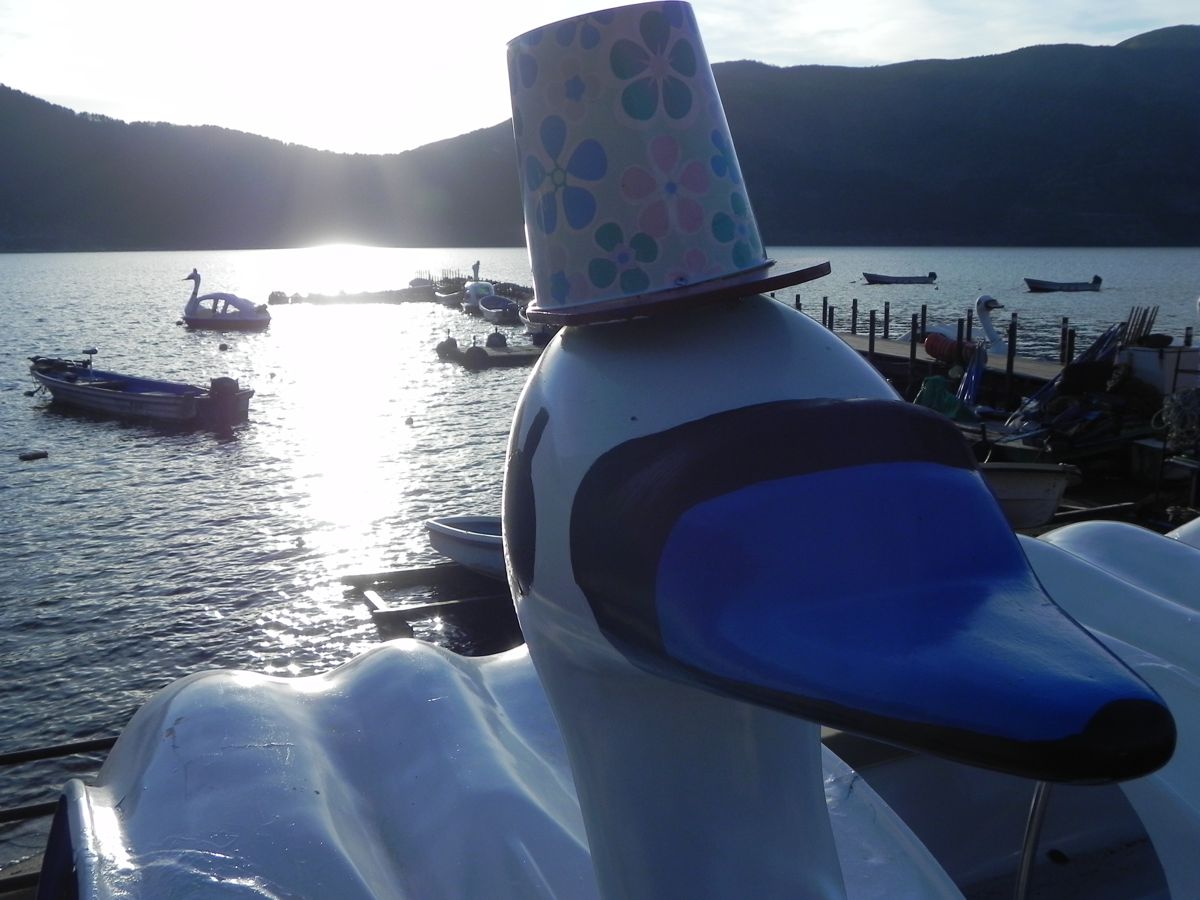 Hakone has become one of my favourite places to visit in Japan. And I full recommend that you go and see it!.

Here are some more pictures for your eyes to feast on:

A walk along Busan’s abandoned railway Originally constructed in 1918 as part of the Donghae Nambu line, the tracks were abandoned last December. The…