It was late in the autumn of 1592; the gravely outnumbered and perilously outgunned defenders ran out of bullets, cannonballs and arrows to fire at the battle-scarred enemy below. As humongous siege towers approached the high walls of Jinju fortress, the ragtag group of warrior monks, undisciplined guerrillas and disgraced generals that made up the city garrison, began to hurl stones (or anything remotely hefty) over the beleaguered walls. With only a tenth of the numbers opposing them, this seemingly futile resistance, amazingly forced 30,000 invading Samurai warriors to flee. Spirits in the Joseon Kingdom were lifted… for all to brief unfortunately.

Despite Korea’s mightiest hero, Yi Sun-sin, absolutely schooling the Samurai in the ways of naval warfare, back on land things looked rather bleak. Finding little in the way of resistance at first, the occupying forces ran through Korea amok. City after city fell to the Japanese blitzkrieg with ease, yet Jinju remained a nefarious thorn in the Samurai backside.

At first glance Jinju fortress, tourist heart of the small city in Gyeongsang province, offers little hint of its ghastly past today. Sat alongside a bend in the commodious Nam River, surrounded by the city yet within sight of forested mountains, things are positively peaceful in fact. It may take all your imagination to conjure up any taste of the horrifying bedlam that ensued here 460 odd years before. 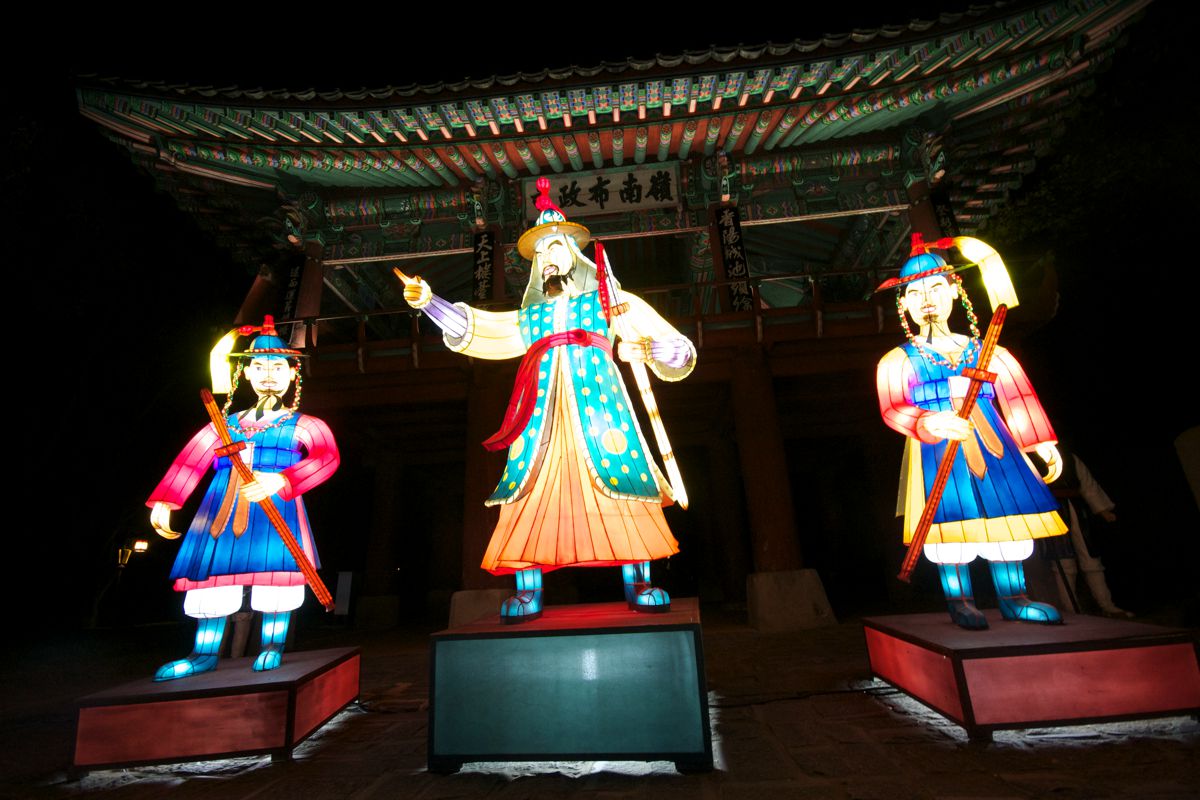 Sauntering through the gates today, visitors are met with more of an inner-city park-retreat vibe, than the malaise of a harrowing last stand. Interspersed between gangly trees, grassy hills and wide-open spaces are temples, shrines, pavilions, huge wooden gates, restaurants, sweeping views of the river and a national museum, no less. A stroll along the high palisades, peering down on the lazy river below is highly recommended. Kick off your shoes and transfix yourself on the occasional period music and dance performances.

Standing just inside the North Gate is a statue of the indomitable general Kim Si-min. The heroic general who held out against the invaders for several days greets visitors by pointing purposely towards the battlements. He is not the only solider to be found still knocking about the grounds, mind. Other – some might say creepily – realistic waxwork soldiers are strewn about the fort. Taken in by the occasion of it all, the occasional tourists might find themselves donning the soldiering garments of the time.

Due to the volatile nature of Korean history, much, if not all of what remains today was rebuilt sometime after the Korean War. In fact the elation the great victory here gave the city was to be short lived. Nine months later and the Samurai fortunes had turned. The invaders were retreating a bloody path back to their ships in the south. Before reaching the sea however, the Samurai commanders somehow found the time to settle the score with the defiant city of Jinju. Throwing outrageous numbers of soldiers into battle, the Samurai finally breached the walls. If accounts from the time are to be believed, the waters of the Nam River at the foot of the fort could not dilute the blood that trickled down from the pillage above.

Chokseongnu pavilion, perched by the castle walls by a cliff edge, was an important command base in both battles. In peaceful times this beautiful building was used as a Confucian exam hall. These days however, the pavilion keeps an eye on the river and the sprawling cityscape.

Close by is a shrine dedicated to Korean martyr Nongae. It was here at the ‘Rock of Righteousness’ (Uiam) that the grief stricken courtesan cunningly lured into her open arms a conquering general of the Samurai. Holding her quarry tight around the shoulders she plunged the two of them into the bloody river below. 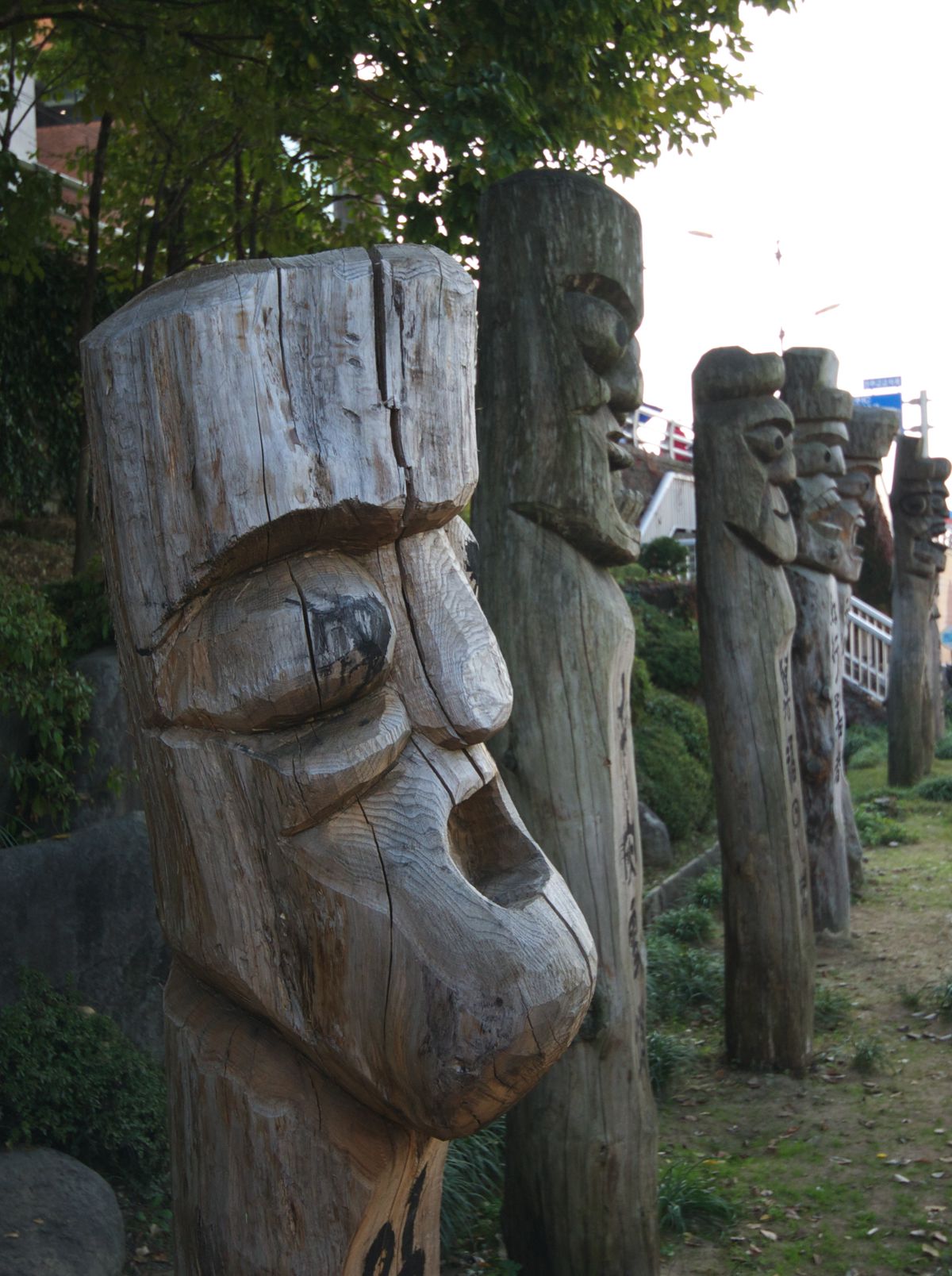 The Jinju National Museum is an eccentric building, apparently inspired by Korea’s traditional wooden pagodas. The museum lives up to the promise set by its intriguing exterior with compelling exhibitions of historical and cultural artefacts. Seeing as Jinju is remembered as one of the ‘three great Korean victories of the Imjin War, the second floor of the museum focuses on the 16th century and the battles fought here and at sea. But it’s not all war here; relics on the first floor focus more on the general history of South Gyeongsang province. There’s also library, auditorium, hands on learning centre and a 3D movie theatre to peruse, if that’s your thing.  For more information on the museum, the fortress and other events cracking off in Jinju investigate the museum’s website

A note from the Editor-in-Chimp: This article was originally written for 10 Mag. You can read it in the December 2013 issue or on their website here