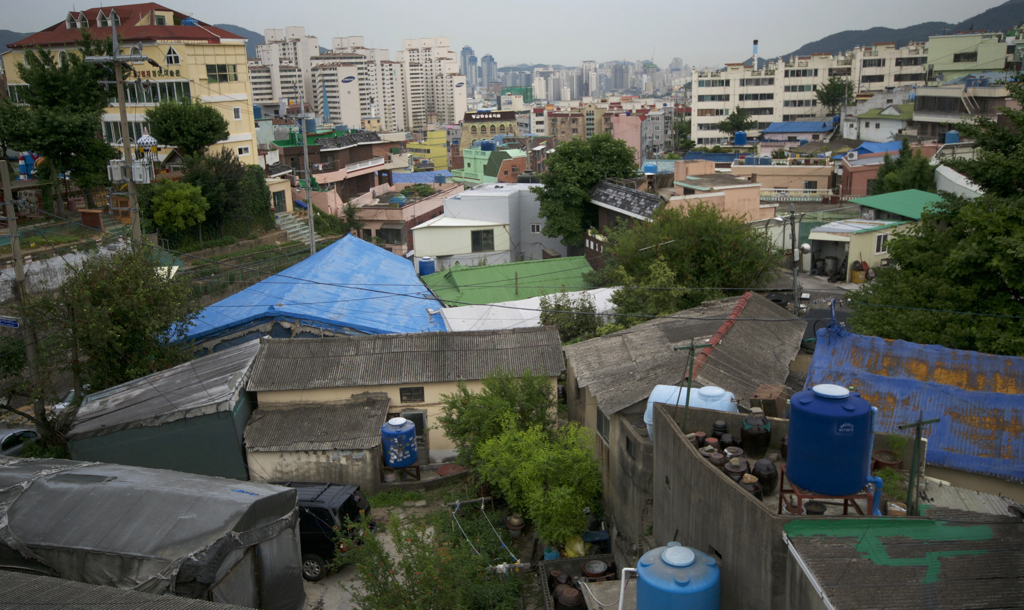 Danggam-dong is a large and somewhat insignificant neighbourhood of Busan, not too far from the hectic ugliness of Seomyeon.

Apart from the gazillions of apartments, seafood restaurants, public schools, some hideous roads, coffee shops, Paris Baguettes, soju tents, supermarkets, a couple of temples, loads of English language academies, and various other hagwons*, there’s really nothing of importance there.

Though it is an easy place to start hiking up Baekyangsan.

The gritty, hillside neighbourhood has twice been my home: First in 2009, and again in 2011. The reason I lived there was, of course, to educate 5 to 14-year-old Korean kids in the intricacies of English at a couple of small private academies.

My second time in Danggam was particularly fucking strenuous thanks to the job. The kids didn’t much want to learn, and I didn’t much want to teach them. At least once a week the kids sent me into a fit of unholy rage. Basically, I was an utterly inept teacher. Oh, and my manager was batshit crazy… but she’s a whole other story entirely. 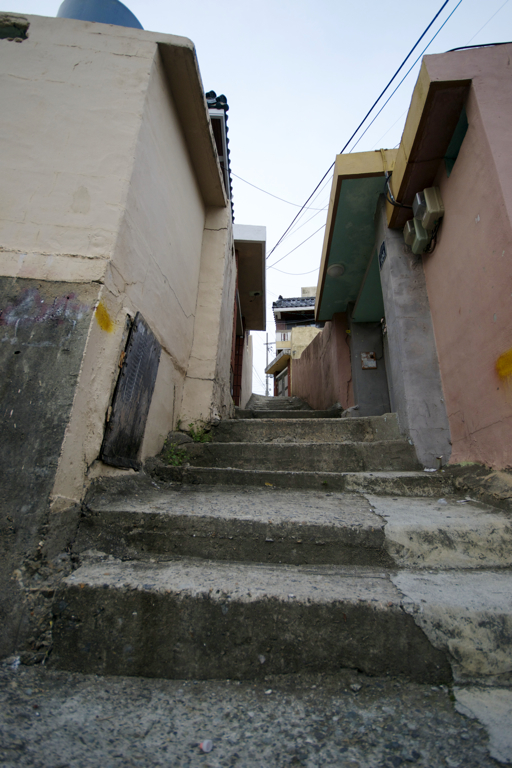 Anyway, the flay she’d given me was spacious, clean and right next door to a supermarket, which, as a fat lazy bastard, I rather quite appreciated. My job might have been insufferable, but at least I only worked 5 hours a day, and I liked my new home. 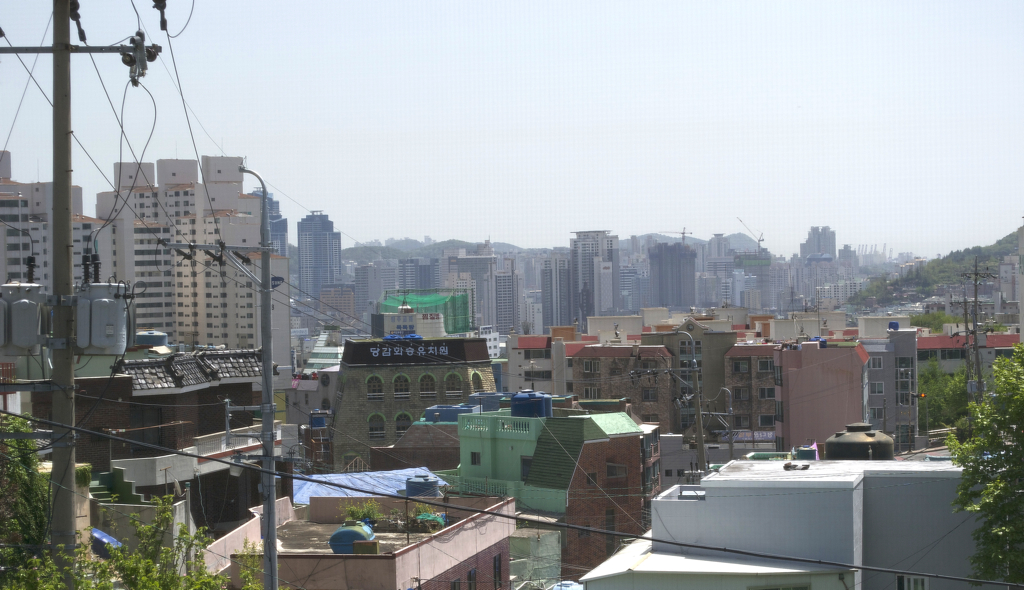 So, one Monday afternoon six-months into the job as I shuffled head-down into school, my manager pulled me into her office, and casually dropped the news that I had to move out of my flat… By the end of the week. 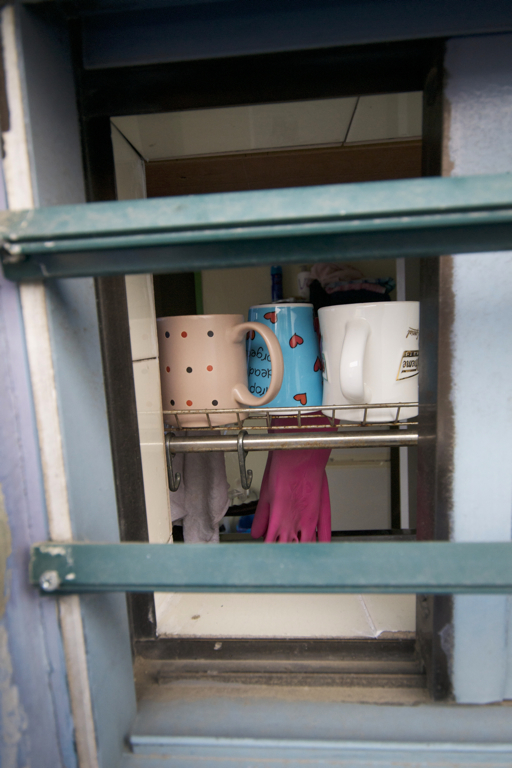 I can’t remember the reasons she gave now, but suffice it to say there was enough bullshit there to fill the office. I should have refused. I should have moaned for all my might. Instead I was much too British about it all and didn’t put up much of a fuss.

Early that Friday morning, I dragged myself out of bed, packed up, and waited for my manager to show up. Of course, she, and the imbecile blue-van man she’d hired were late. It turned out that he didn’t have the right gear to transport my stuff, and I ended up carrying most of it! 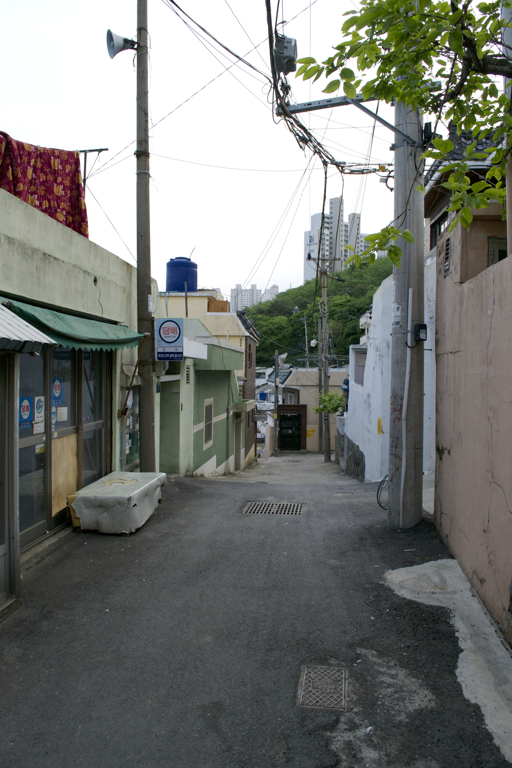 My new place was further down the mountain, and right in and amongst a small favela-like neighbourhood. From the shitty paint job,  scattered litter, and general state of dilapidation, I knew I was in for a massive downgrade.

Upstairs, my new flat was half the size of the last place and incredibly rustic. There were cockroaches all over the apartment. The walls were so thin that I could honestly hear my elderly neighbour scratch himself. Plus he was basically deaf and watched TV on top volume all day everyday until whatever channel was on stopped broadcasting – usually at 1am. 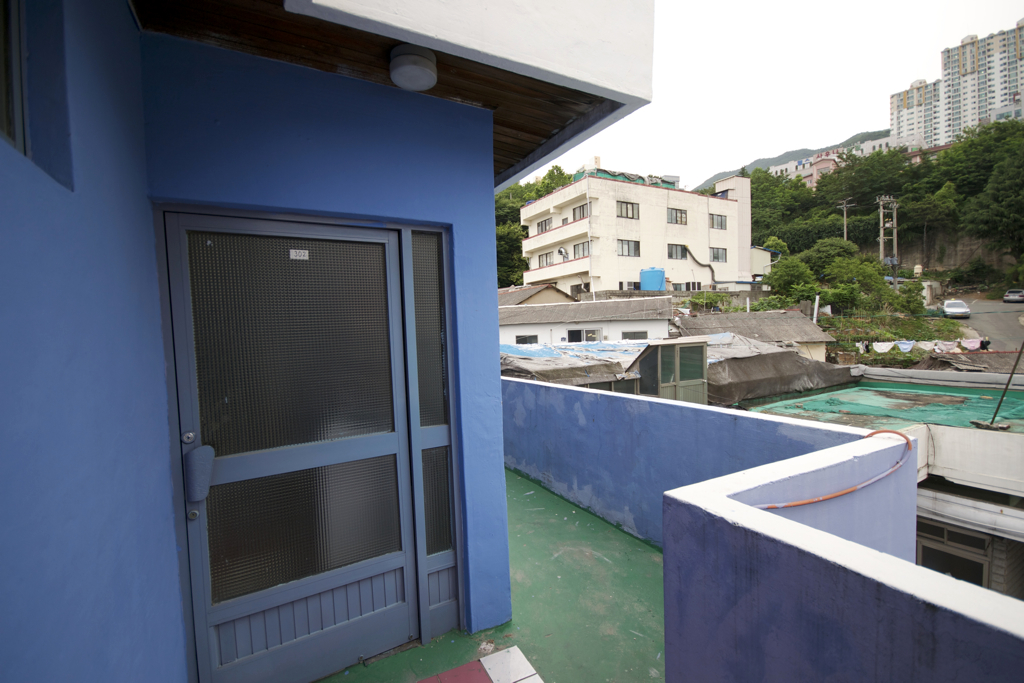 I did grow rather fond of the place. I took me a while to get used to the cockroaches, the cold showers, the weak-as-piss air conditioning, the paper-thin walls, the unspeakable bathroom and the dirty washing machine water that emptied in there, and the deaf neighbour (We became friendlier and traded shots of alcohol every now and then).

I was bitter that all of my friends had decent apartments, and here I was teaching in a developed country, at an expensive school, but living in North Korean conditions. 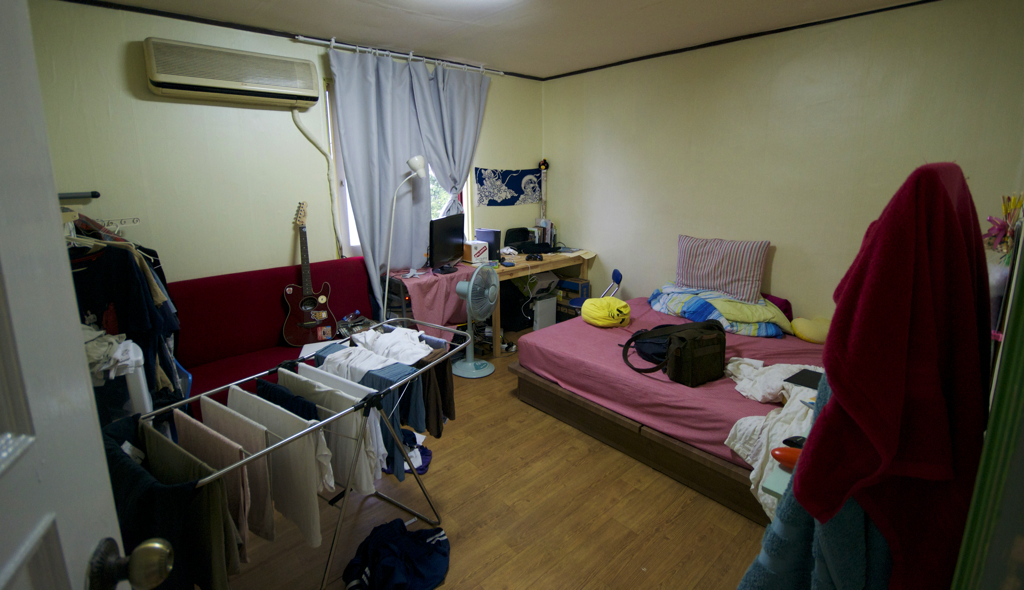 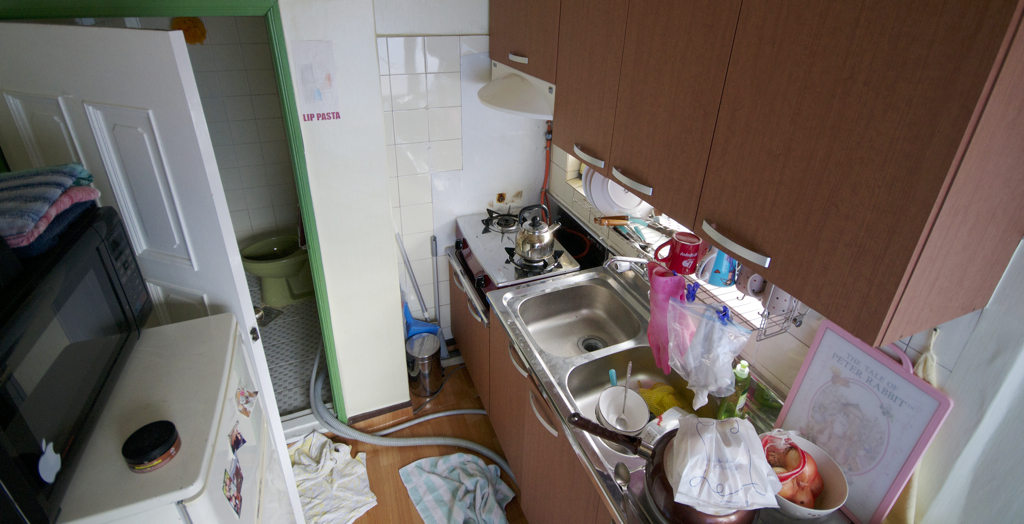 When my one-year contract at the school was up and the manager asked me to stay an extra week before the new teacher started, I burst into a derisive laugh and told her where to stick it… Well actually, I barely managed to stitch together a lie about a training week in Seoul my new school wanted me to do. 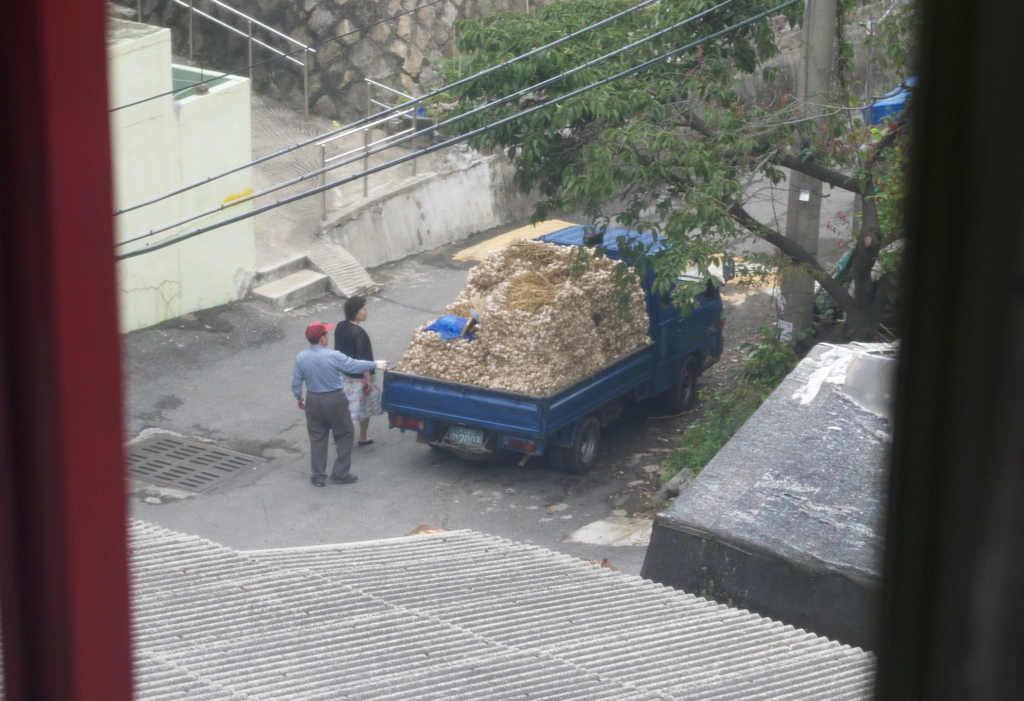 That bastard with the blue Bongo van woke me up everyday at the barbaric hour of 10am! 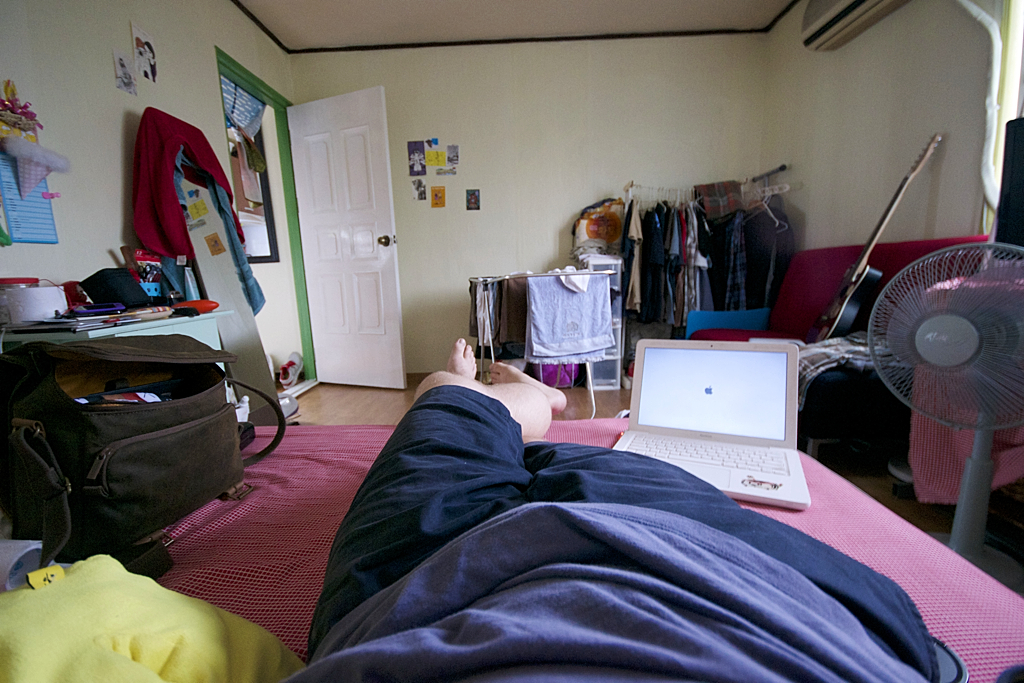 By the way, if you’re in Korea and think your apartment is shit, some friends of mine run a relocation business and can help you out with that.

Maybe it was the fact that everyone who ever built any of this stuff was well and truly dead, but after wandering around Angkor…