I’D HEARD that the place was going to be busy. The weird moronic western dude behind the desk at our hotel told us as much when we enquired about the place. “It’s even busy during the rainy season,” the words stumbled in slow motion out of his mouth. “We went there in October during the rainy season and there were still, like, 40 boats in the bay.” It was probably his thick birth-control glasses, nervous demeanour, monk-like bald patch, and slow, slightly scouse – but also kinda german – accent that, at least for me, rendered his opinions worthless. 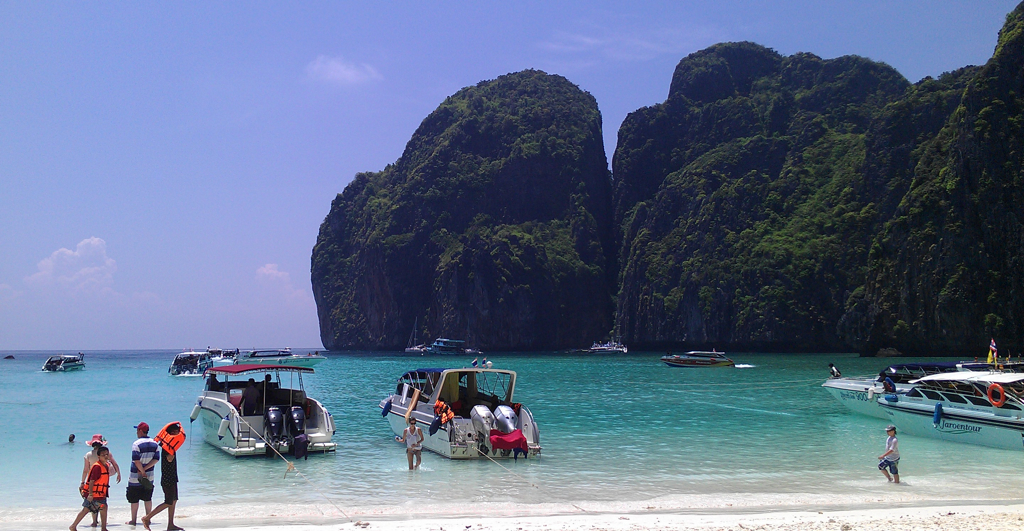 I was 17 years old in the summer of 2000 when The Beach was released in the U.K.. At the time I was going through the motions at sixth-form (ask a British friend what that is) and working part-time as a lifeguard in an asbestos-rigged public swimming baths. Fuck me, that job was tedious, but at least we were all slowly dying from cancer.

My co-workers and I managed to maintain our sanity by complaining all day, rather than actually paying attention to what the swimmers were doing. Adding to the intense boredom and cancerous flumes was the soul crushing fact that many of my co-workers had started when they were 17, like me, and were still employed there twenty years later. I desperately did not want to turn out like that.

Richard (played by a young Leonardo DiCaprio) and his misadventures backpacking around Thailand spoke to me. The movie highlighted the boring, pointless direction my life was heading and imbued me with a naive, but all consuming desire to take off into the world myself.

So, a year later (September 10th 2001!), I flew off across the world to Central America (wrong side of the planet, I know, but similarly tropical and as far away as Thailand) in search of my own jungles, pure white sands, blue seas, romance, intoxicants, the exotic, and the unknown.

The Beach was the catalyst that lead me to travel independently, which inspired me to go to university, which allowed me to teach in Korea, which has been my base for the past 8 or so years, and which, eventually, led me to Thailand and writing these here pointless words.

So you can see (well, read), the film has held a special place in my heart for a long time.

I heard / read that Maya Bay (the beach’s real name) wasn’t really worth visiting due to intense crowds, but I still couldn’t decide. It was a catch 22: I knew if we didn’t go I’d be pissed off with myself for being so close and squandering the opportunity. But I’d be equally as pissed off were we to go only for it to be heaving with tourists.In the end I asked my girlfriend to decide.

Obviously she determined that we should go, or I wouldn’t be typing this crapola, would I?

It was busy. Pi Pi Don (the name of the island The Beach beach is connected to) as a whole was fucking busy. But I’d seen worse. Way worse! Set foot on Haeundae beach in mid August, and you can barely see the sand for parasols, sun lounges, and Korean families in drenched clothing feasting on fried chicken.

Maya Bay was nowhere near Haeundae-busy.

As our longtail boat was rounding the cliffs of Pi Pi Don, I was nervous. I felt like I was about to meet an old friend, one that I hadn’t seen in years and wondered if we’d still have anything in common.

We rounded the bay and, due to all the boats plonking around inside the massive bay, it took me a few minutes to recognised it. My old friend and let himself go.

Our tour guide took us to snorkel about in the shallows across from the beach. It was fun, but I found myself jealously eyeing up the other side, and gradually becoming enraged at the multitudes of tourists over there. That place didn’t mean the same to them! It was my beach. The beach was just another film for them; it couldn’t mean the same for them. 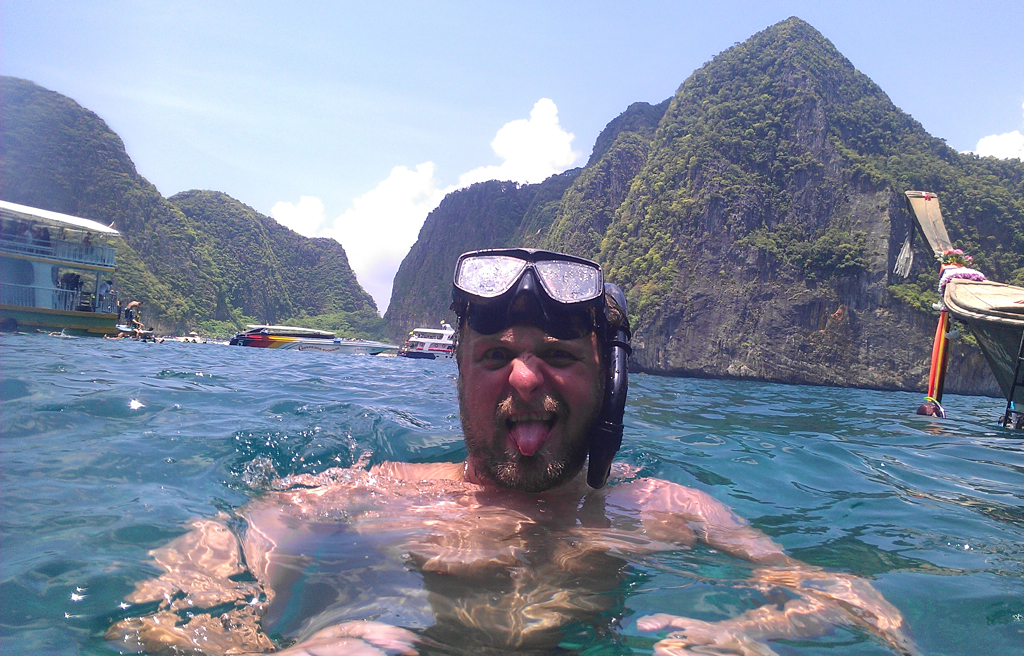 And then it dawned on me: I was just another tourist in Thailand. I had no real right to complain about others. I was one of them. I was another chunky Charlie eating up the whole fucking world!

It starts with four, Richard! Then they multiply!

By visiting Maya Bay, I was now complicit in its desolation, just another cog in the tourism machine. And that’s what tourism does: It destroys the things it loves. It eats itself. There’s really no avoiding it.

Some blame the film for ruining Pi Pi Don. But that’s bollocks! The island is so beautiful, so unique, that by now it’d be crawling with tourists anyways… 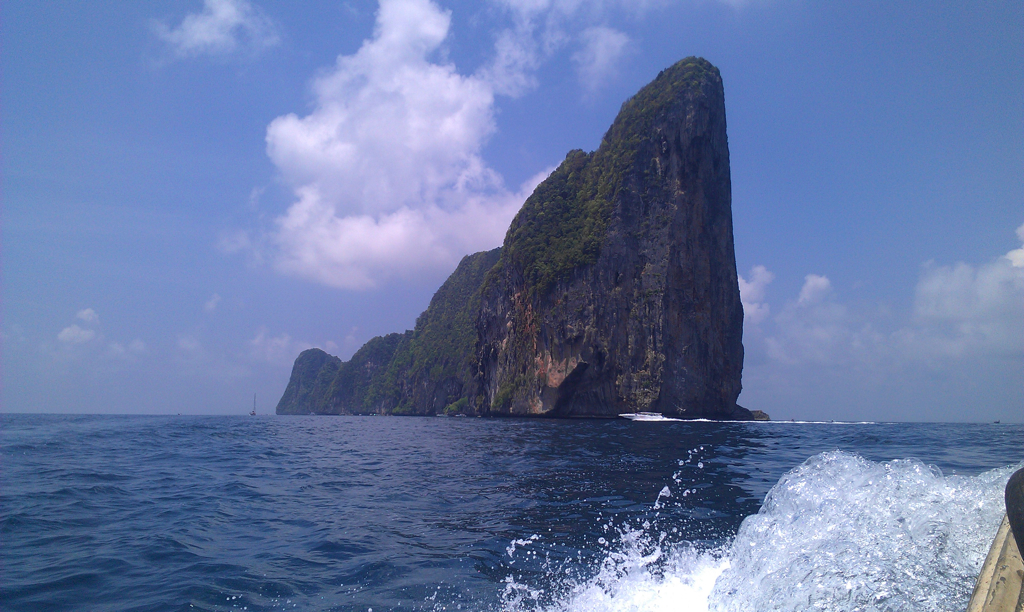 A few days previously I visited a beach, on a much less popular island, that was completely sealed from the outside world by cliffs, just like the one in the movie. I had to swim through a horrifically dark cave to get there.

The scene of the other side was straight out of the pleistocene. The jagged cliffs stretched impossibly high, sort of  like Manhattan recast in stone, and the trees somehow clung to their sides sprouting skyward. Birds and all manner of insects were going apeshit in the trees and echoing off the walls. How did anyone ever find this beach? It was beautiful. Then emerged from the cave a boatload of Chinese tourists. 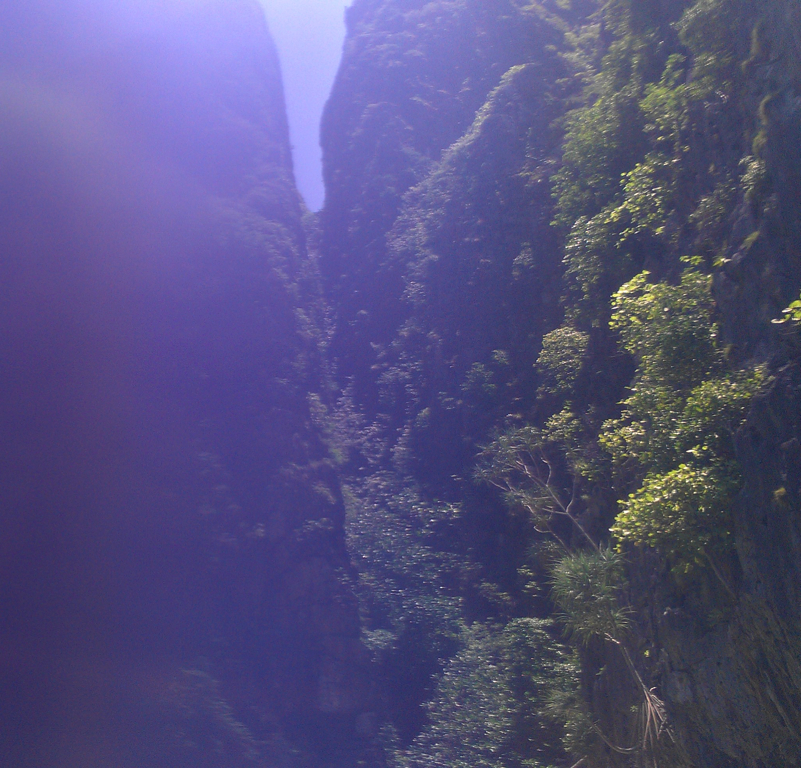 Last Saturday a shit tonne of people descended on London for the People’s Assembly‘s March for Health, Homes, Jobs and Education to vent their many frustrations at…