“THE CONTRACT everyone agrees to but no-one reads.”

That, apart from the gushing quotes from the likes of the Guardian, Washington Post, Time magazine and the Huffington Post, is all the promo blurb says on the back of Robert Sikoryak’s latest comic book Terms and Conditions.

There’s a very good reason no-one bothers to read the cryptic legalese of the iTunes terms and conditions. It’s insurmountably dull. Yet Sikoryak, for some reason, decided to take his artistic talents and turn Apple’s 20,000-word contract into a graphic novel.

On every page, Sikoryak draws the Apple co-founder/friendly face of capitalism Steve Jobs regurgitating the document at various passers-by in a parody of classic, modern and niche comic book characters.

And, while the artwork is undeniably brilliant and an affectionate homage to it source material, it turns out that the impenetrable gobbledygook found in Apple’s terms and conditions is just as confusing and lobotomising in comic book form as it appears on screen. 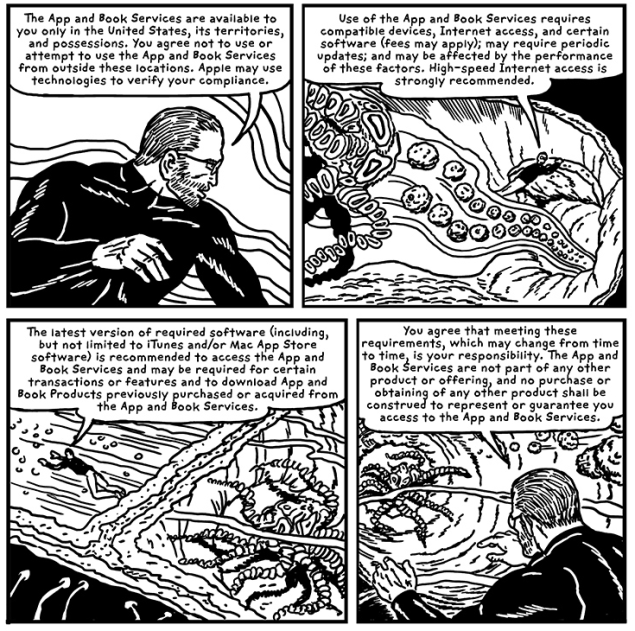 Whether it’s Steve Jobs shouting the above line as he flies through the sky as Osamu Tezuka’s Astro Boy, whispers it from behind a tree as Otto Messmer’s Felix the Cat or spurts it out while downing a beer as Matt Groening’s Homer Simpson, such lines don’t make very interesting reading. And it goes on like that for a gruelling 96 pages.

The book might have amused if Jobs had some sort of purpose he was striving towards on the pages. Instead, he just jammers on and on.

And, had the drawings made some sort of cohesive story, then the words wouldn’t have mattered at all — rather like reading a comic in a foreign language and leaving the story up to interpretation. Instead we’re presented with a random assortment of images.

The book’s one saving grace is its pictures and finding out what each page was inspired by in the index is a nice touch. But even this begins to become annoying as, after losing all interest in the text, this became the sole purpose of the exercise.

A novel should never be called so when it lacks a story, textual, graphical or otherwise. Sikoryak’s efforts come across as a pointless lionisation of a philanthropic billionaire, feeding the discourse that our lives are a pointless individualistic grind, that neoliberalism is the only choice — and that the only thing that will save us is consumerism and the absurdly rich.

Murdoch is a dick, but you probably knew that already. Check out this tweet: Each individual muslim, each and every single one of the…