Bangkok can fuck right off! I hope the military junta obliterates this overflowing shithole…

… At least that was my first impression of the capital city.

It took us ages and ages to reach Bangkok. Kyeonghwa and I jumped on a crowded ferry early in the morning from Ko Pha Ngan and trundled across the Gulf of Thailand for three hours, waited another two hours for a bus to arrive, then rode that bastard for another seven and a half glorious hours.

We eventually arrived in a dark Bangkok twelve hours later just off from the infamous Khaosan Road. As we and the other passengers went about sorting our bags as they were dumped from the bus, the charlatans came out of the woodwork and began the customary tourists swindling:

“Hey you, were you going?… That hotel is so expensive, I know cheaper one… Today is Buddha’s birthday, everything closed… Do you want a suit?… Tuk-tuk $1!”

We were approached by two of the dodgiest bastards in Thailand: one with a massive scar across his left eye and more than a few teeth missing, the other, well to be fair, he only looked dodgy next to his short-sighted friend.

Bangkok was experiencing its own problems!

One-eye asked me where we were going, and I, having had my British distrust of strangers thoroughly eroded by the affable island inhabitants of the Andaman and Gulf coasts, naively decided to hear their offers. He said our hotel was 20 minutes and 700 Baht (US $21) away; an absolutely absurd price!

After summarily dismissing with those wankers, we walked around the corner and found a couple of tuk-tuk drivers. We spoke with one fellow who said he knew where our hotel was, could get there in 10 minutes, and would scoot us there for 200 Baht ($6 US)… Much better. We hopped in his rickety motor, put our backpacks under our legs and clung to our rucksacks.

Kyeonghwa was sat to my right, fiddling about in her rucksack looking for her phone as I stared out the opposite side. After two weeks of lounging about on tropical islands, it was weird to be back in a city.

Like a moth to flame, I was enraptured by the lights, noise and hustle of the metropolis as it zoomed past. This was great; we’d started all the way down in Kuala Lumpur, come up through Malaysia, sauntered across Thailand’s southern islands, and here I was, whizzing through the streets of Bangkok on a tuk-tuk with my awesome girlfriend. I was smirking. My life, I thought, is great. 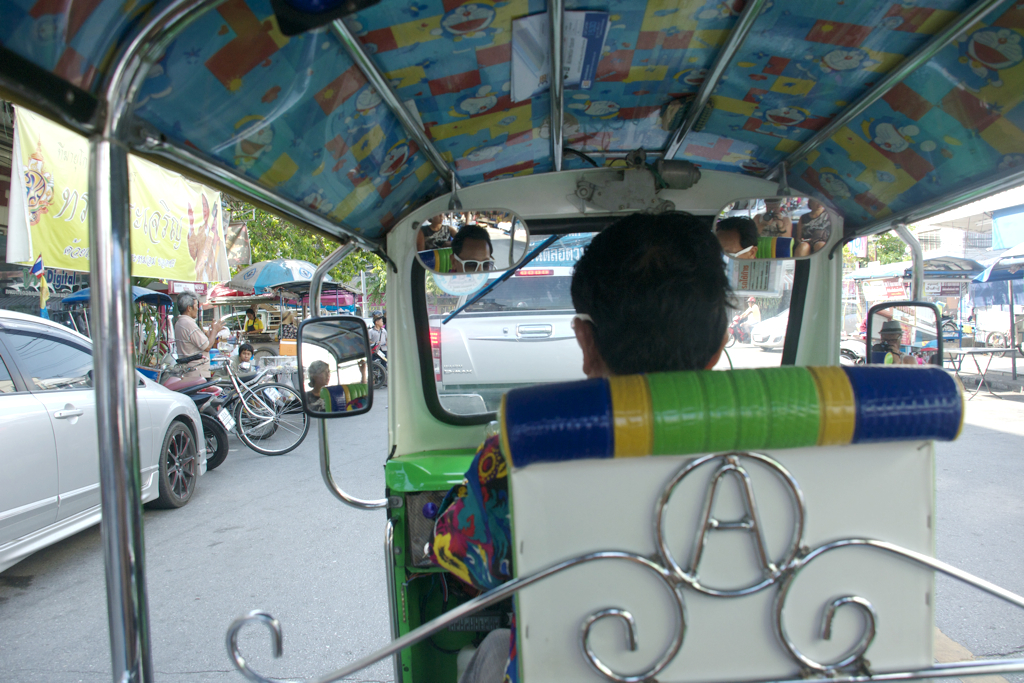 Tuk-tuk: Hold on to your stuff in one of these!

Annoyingly, just as my smugness was nearing its peak, Kyeonghwa tore me from my sweet hubris with a shrill scream. She’d been screaming a lot lately, what with Southeast Asia’s vast array of cockroaches, snakes, geckos, and spiders (oh, and because my bedroom prowess, of course). I looked down towards the floor expecting there to be a six-legged monstrosity scuttling about her feet but there wasn’t. She screamed again, this time more desperate.

Maybe it was the adrenaline, but the next few moments passed in slowmotion. I looked up and saw two guys on a motorbike cruising by the side of the vehicle. The back seat passenger held on to Kyeonghwa’s rucksack while she, holding onto the straps, was in danger of being pulled out the side.

As my brain was still figuring out what to do, the driver looked back and saw that his partner had more of the bag than Kyeonghwa and revved up. With cars surrounding the tuk-tuk, she wouldn’t last long were she to fall out.

With this realisation I grabbed her hard around the shoulders and pulled her towards me. In the motion, Kyeonghwa let go of her bag and the cunts on the bike sped off, weaving through the traffic ahead. She looked off towards the thieves, then back to me. All she said was, “My passport!”

All Possessions Are Fleeting

It wasn’t the fact that Kyeonghwa’s stuff was gone (we were insured and luckily there wasn’t that much money in the bag anyway, though the sentimental value was through the roof). What was infinitely worse, however, was the fact that we would now have to piss around in embassies, police stations, and immigration (and I wouldn’t wish Bangkok immigration on my worst enemies!).

The remnants of a protests

Kyeonghwa took the whole thing quite well. When we eventually reached a hotel (it turned out the taxi driver didn’t know where he was going, and so I had him stop at whatever the next one turned out it be, which was a full four fucking stars over our budget!) her practical nature quickly took over as she calmly cancelled her credit cards, contacted her travel insurance providers, figured out where the Korean embassy, Bangkok immigration centre, and nearest police station were.

For me, it stirred up a whole host of irritating emotions. It was the lack of respect shown to someone I love dearly, and the utterly helplessness I felt afterwards. I had banged on and on about how great travelling is from the very first moment we’d met, and I’d gotten her in that situation. It had taken me the best part of two years to convince her to backpack around Southeast Asia with me, and now, a fortnight into the trip, everything was fucked. And my stupid, but never-the-less primal male-ego had been damaged: I had failed to protect my woman. 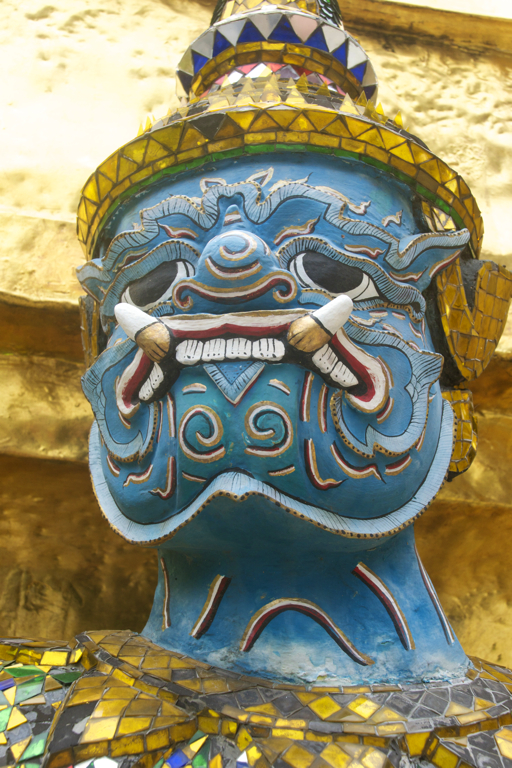 I’ll admit that the city’s infinite Theravada buddhist charm, the boats up and down the river, the street-food, the people, the cheesy floating markets, and our awesome hostel did win us over a little bit. 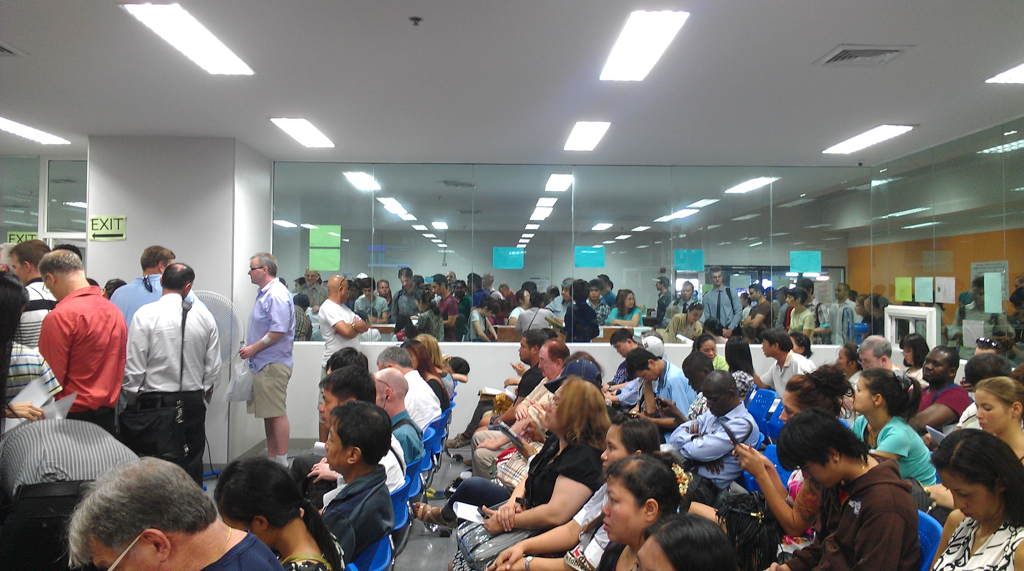 “Oh, the humanity!” I wouldn’t wish Bangkok immigration on anybody

We were unlucky to have first impression we did, and that it could have happened in any city. And so I take back what I said about at the start. The situation in Thailand looks mightily shitty, and who knows what is going to happen. No doubt the rampant inequality that has dogged the kingdom for years was the root cause of the crime. I’ve no idea what is going to happen to Thailand under the military junta, but I very much doubt it can be good.

What happened to us was just a flavour of the buffet of bullshit the residents of Bangkok must now be living through. I wish them all the best. 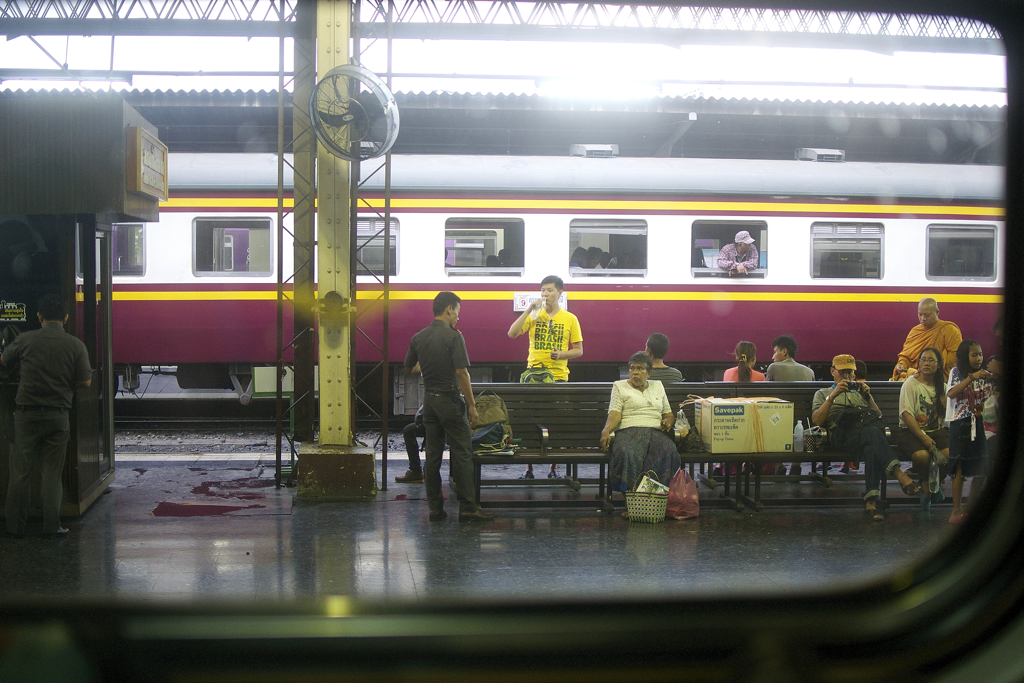 Leaving the capital was a relief…

A note from the Editor-in-Chimp: This post was originally posted here on Asia Pundits, for which I am also the Deputy Editor. So support your Monkeyboy and check Asia Pundits out, yeah?

“THE CONTRACT everyone agrees to but no-one reads.” That, apart from the gushing quotes from the likes of the Guardian, Washington Post, Time magazine…