Watching the reports coming from Israel / Palestine last year was absolutely fucking horrific. By the end of the conflict the Israeli military killed around 1,500 civilians, more than a third of these were children. The images that came on screen where hard to watch, especially knowing that it was the UK and the US governments who manufactured and sold the weapons to the Israeli Defence Force (IDF).

Now, the article below is one I wrote originally for Asia Pundits (you can read it here) on July 18th 2014. Since then I have gone on to do a Master’s Degree in Journalism, War and International Human Rights and learnt quite a few things about media basis, and so I would probably write this article a little differently now. Do I now think the BBC was biased in its coverage of the conflict? Yes, I do, but there are quite a few structural, cultural, economic and political reasons for that, and the BBC is by no means alone in this nor totally at fault. Objectivity does not exist.

If anyone cares, I might type up something about journalism and objectivity. In the meantime however, watch John Pilger’s brilliant documentary The War You Don’t See. Skip to about an hour in to were the film discusses the whole BBC (and other’s) biased coverage of Israel / Palestine.

Anyways, as George Orwell said, “All writers are vain, selfish and lazy…” So of course, I’m not going to rewrite any of this; it’s perfect as it is… 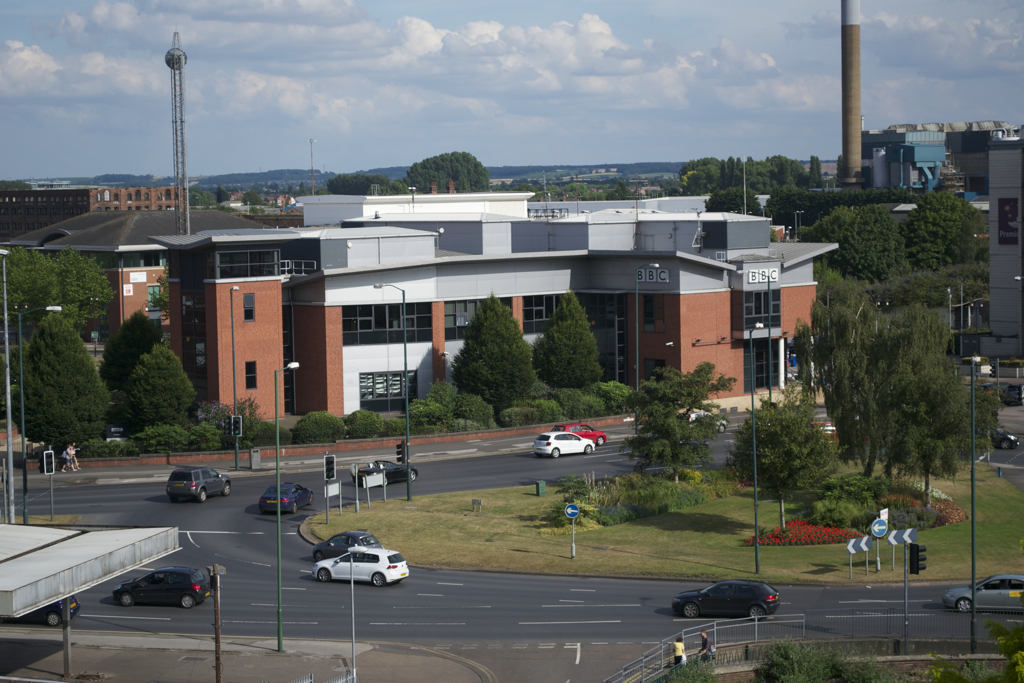 OUTSIDE BBC Nottingham yesterday evening, hundreds joined in a protest organised by thePalestine Solidarity Campaign over the BBC’s coverage of Gaza.

The UK based movement believes the Beeb is biased towards Israel, and its reports lack context and background.

In a 45,000 strong petition to the corporation the group stated that:

“We would like to remind the BBC that Gaza is under Israeli occupation and siege.

We would like to remind you that Israel is bombing a refugee population – Palestinians who were made refugees when they were forced from their land in 1948 in order to create Israel.

We would like to remind you that Gaza has no army, air force, or navy, while Israel possess one of the strongest militaries in the world.”

Throughout the month of July, the group has organised protests outside BBC offices across the UK.

I was invited to take part in the Nottingham protest as a member of Left Unity, a lefty political party in the UK. 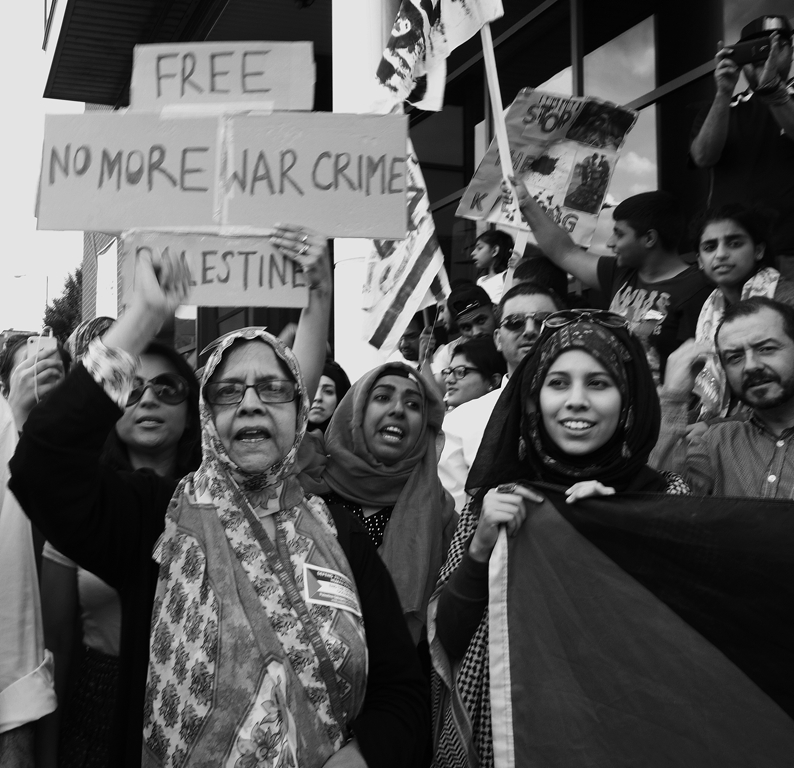 Up until a few years ago, I had always taken pride in the BBC and their unflinching impartiality.

However, having travelled a lot, and witnessed the shambolic bullshit of Fox News, the Korea Times and its government pandering / down-with-Japan rammel, China’s CCTV News, and the Daily Mail, I saw the BBC as a shining light of journalism.

I’ve since lost a little faith in the BBC and other news media. Their 24 hour rolling news channels; the constant state of fear; the dumbing down of information; the stupid info-graphics and simplistic slogans; the focus on events rather than processes, and their blatant desperation for viewers / readers led me to believe they are more interested in profits than actual journalistic integrity. 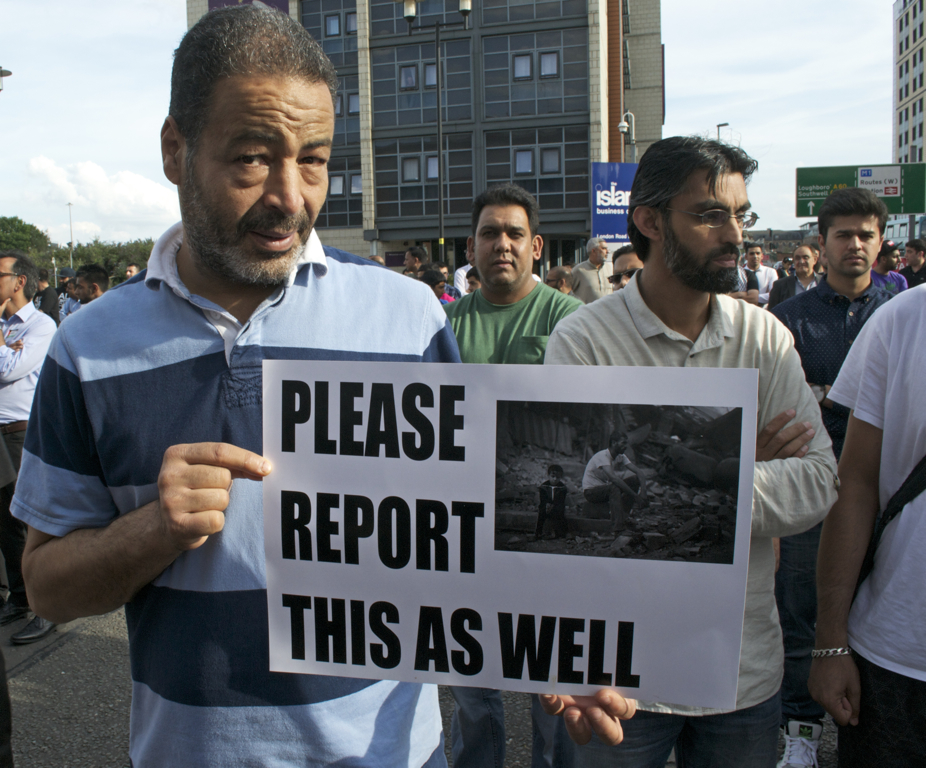 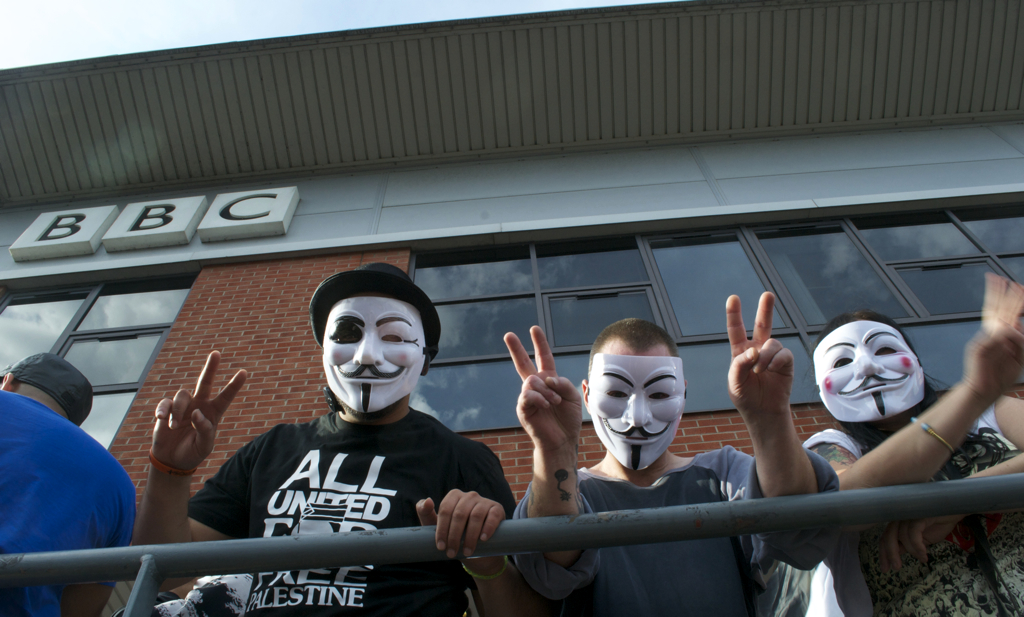 So sitting on the bus heading for Nottingham, I felt pretty conflicted. What’s wrong with the BBC, I wondered, and what do they have to do with the humanitarian tragedy in Gaza? 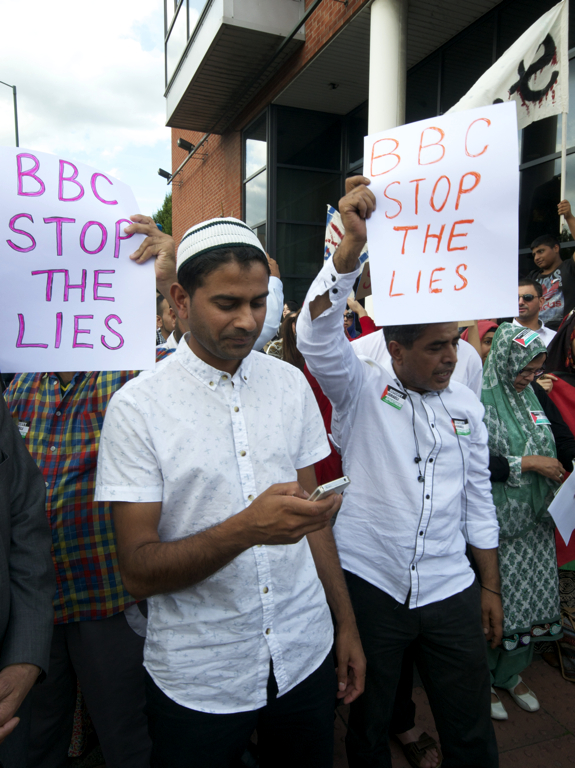 I got there all sweaty and early, and found a small crowd passing out Palestinian flags, placards with political slogans, and thank yous for coming. I was surprised by the multiethnic, multicultural, multi-religious, multi-everything crowd. Of course, I shouldn’t have been. As one child’s sign pointed out, ‘You don’t have to be muslim (to care about Gaza), you just have to be Human.’

People continued to trickle into the BBC car park, as the spokespersons for Palestine Solidarity Campaign took to the Megaphone and laid out their case to the BBC. 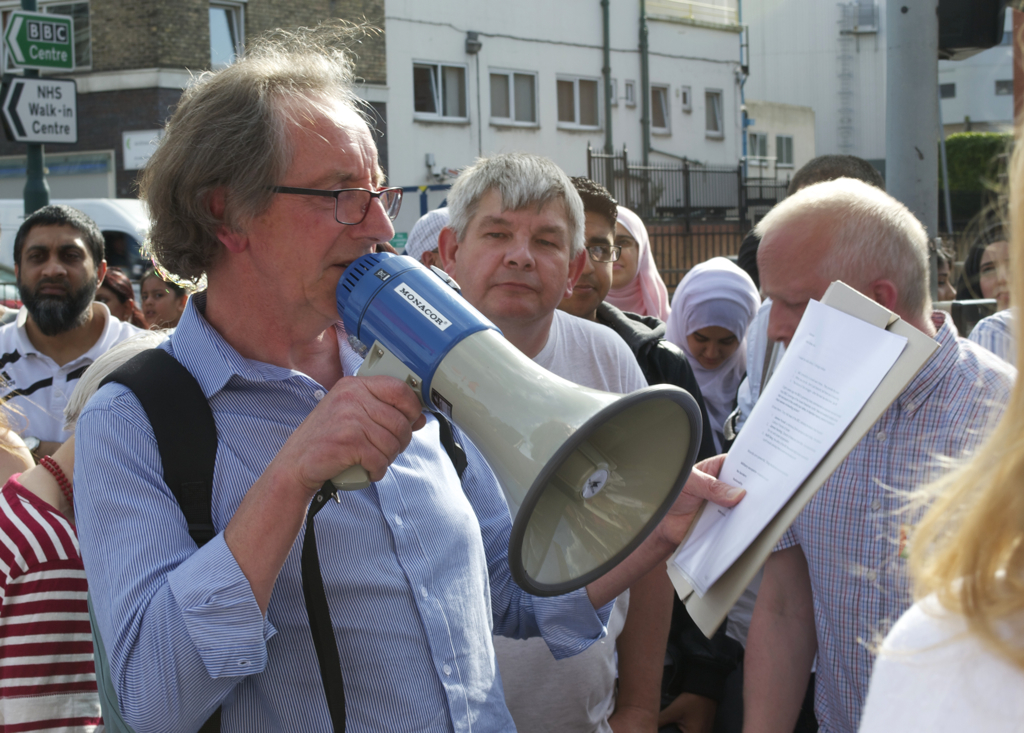 After the charges were read out, the protesters were whipped into a fury of democratic slogans by sisters Yazmin and Shakilah. 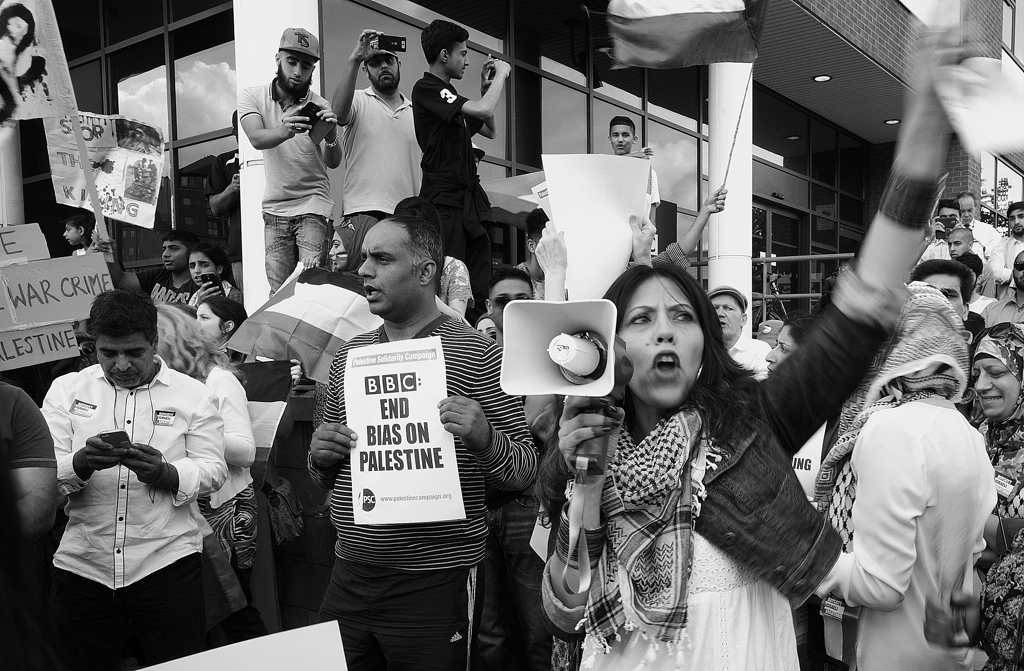 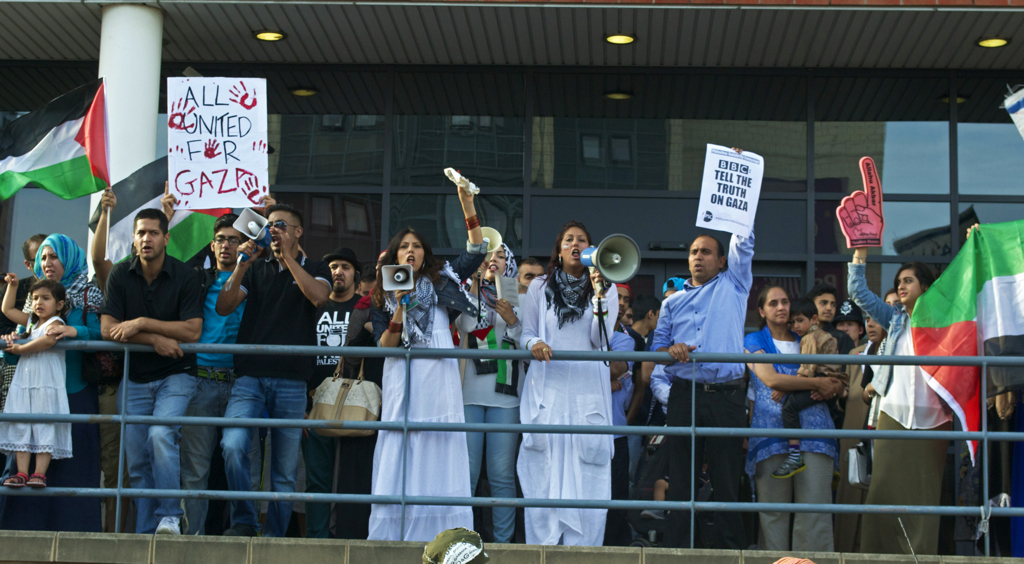 I caught up with Yazmin and Shakilah towards the end of the protest after they’d shouted their vocal chords raw (Luckily they still had the breath to talk with me). I wanted to know why they had singled out the BBC.

Her sister Shakilah continued, “I’ve been having to watch channels like Al Jazeera to catch up with minute by minute news of what’s been going on. But the BBC have completely boycotted this. There’s been next to nothing going on at the BBC.

We asked to speak to them (The BBC), but they refused to speak us. Every time somebody hides you know there’s something secretive going on.”

“I’ve got this photograph seared into the back of my mind,” said Alfie, a street photographer. “It’s always going to be there. I’ll never get rid of it. Do you know the one I mean?” Unfortunately, thanks to some muppet on Facebook, I did. “It’s of this father holding onto his kid who’s had the back of his head blown off. The kid had no brains. It was a really powerful image.” 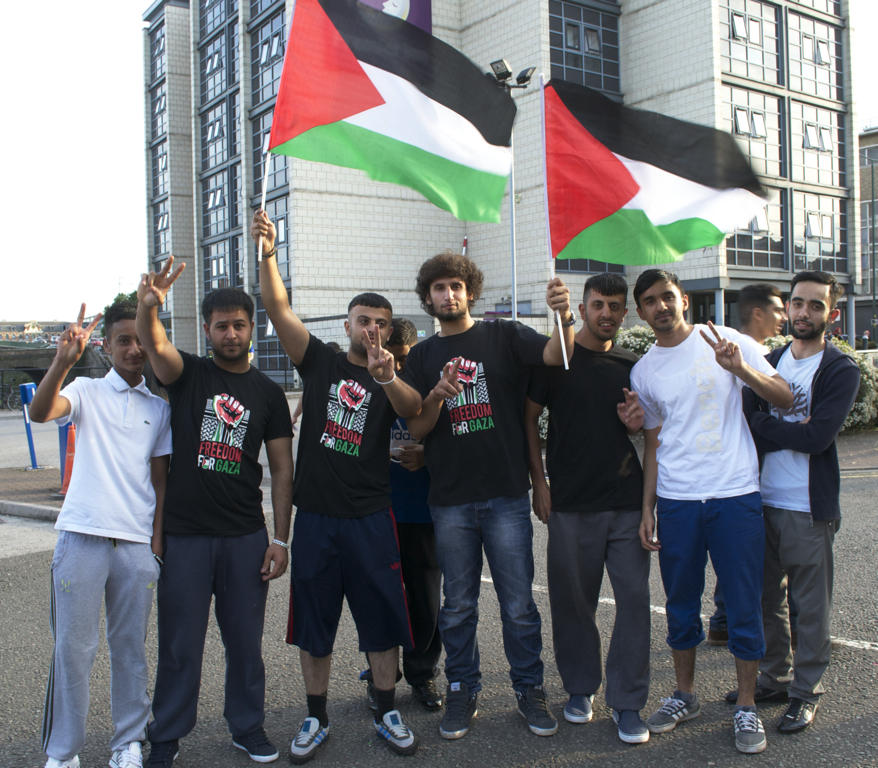 Where’d you get yer shirts?, I asked. They’re cool.

The tall lad with the awesome afro smiled and said, “Aw, we know the guy who makes ‘em.

Fifteen quid?, I said surprised for some reason (£15 is pretty cheap, actually).

“All the money’s going to charity,” chimed in Mr. Afro (I didn’t catch his name). “Well, it best be. Or he’s gettin’ beatings.”

Why did you come down here, today?, I asked. Why are you singling out the BBC?

“The media don’t give a shit about the Palestinians, do they!”

“Nah, not all of ‘em,” came the voice of one of the lads cutting up his friend. “Channel Four does. Did you see that guy with the White hair last night?”

“Yeah, man. He proper tears into them.”

Over the shyness now, I shoved my camera in the faces of everyone in my path. 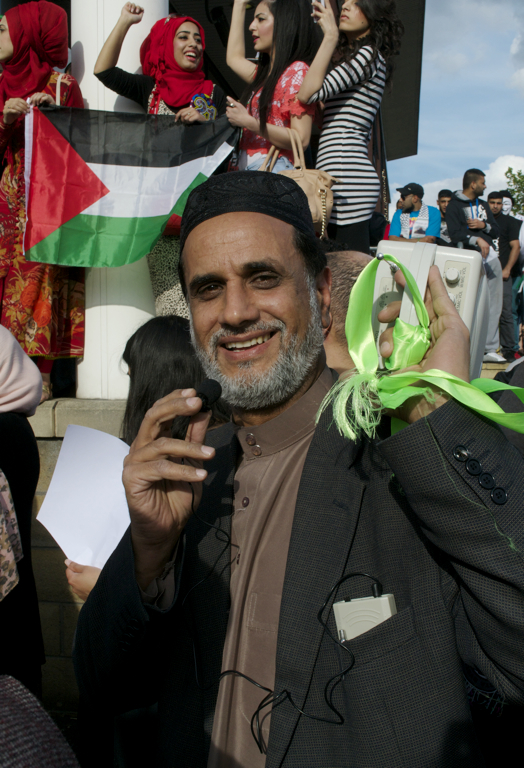 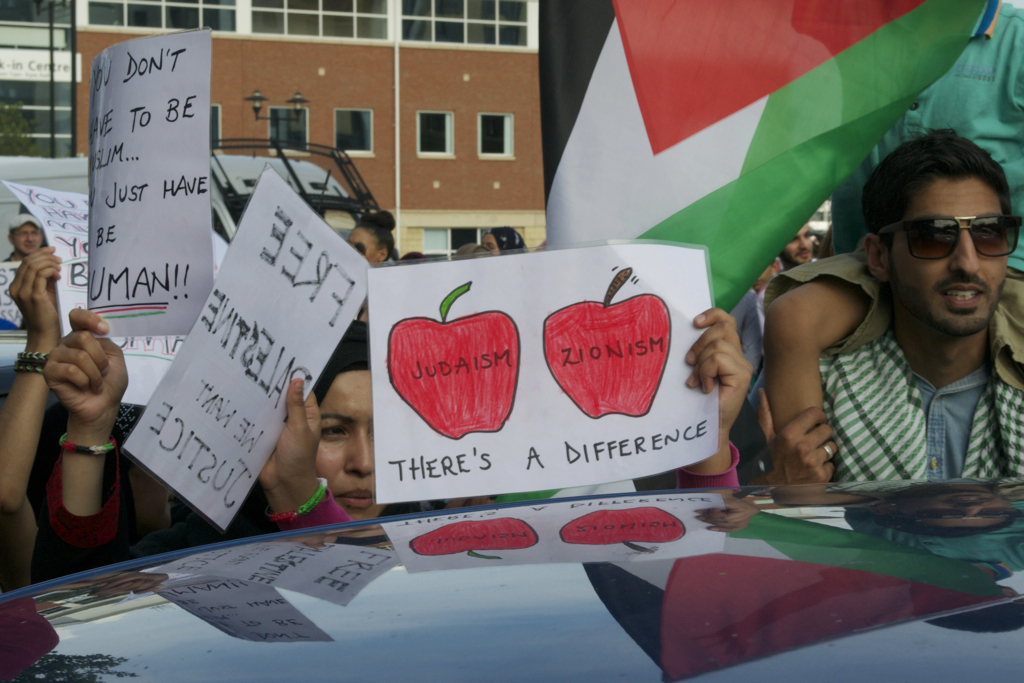 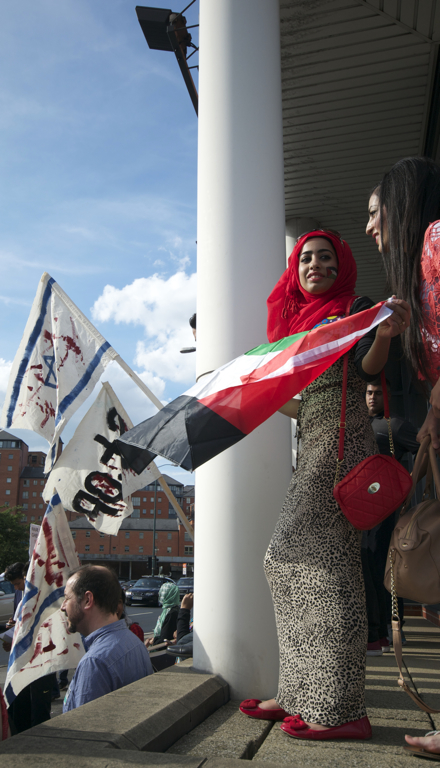 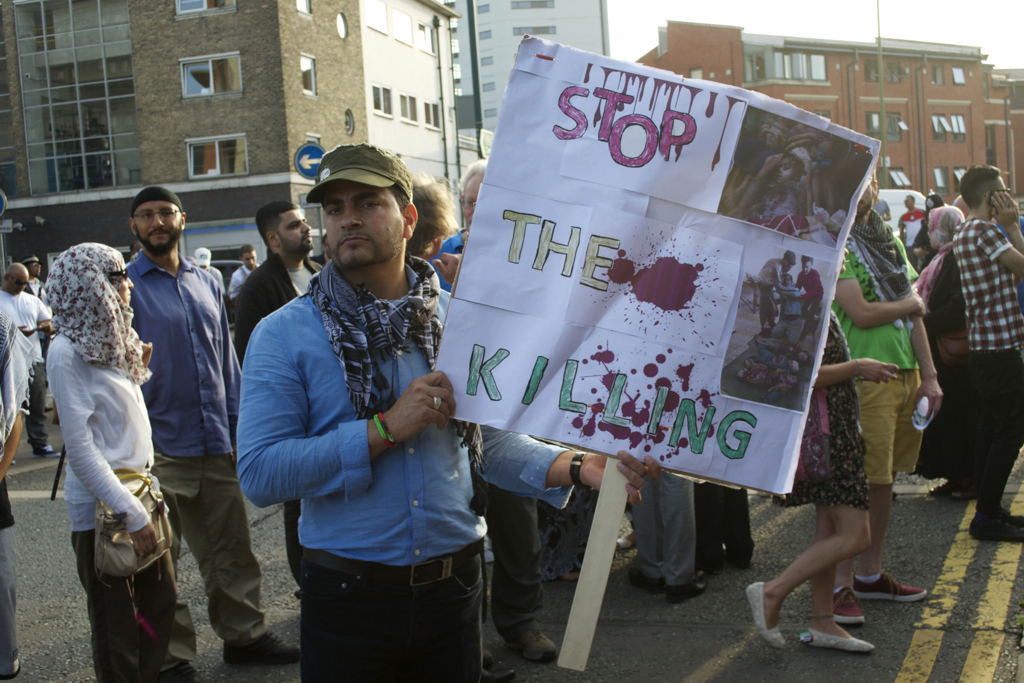 Do I think the BBC is biased? Honestly, I’m not sure. I think by trying to please everyone, they manage to piss everyone off. I do think treating the two sides of the conflict equally is wrong. The Israeli Defence Force (IDF) has one of the best armies in the world and is financially backed by the US and much of western Europe. While the Palestinians are refugees literally fenced in their own home.

However I do know that what is happening in Gaza is basically genocide. Just yesterday the Israeli Defence Force began a ground offensive in Gaza. So prepare yourselves for more crimes against humanity. 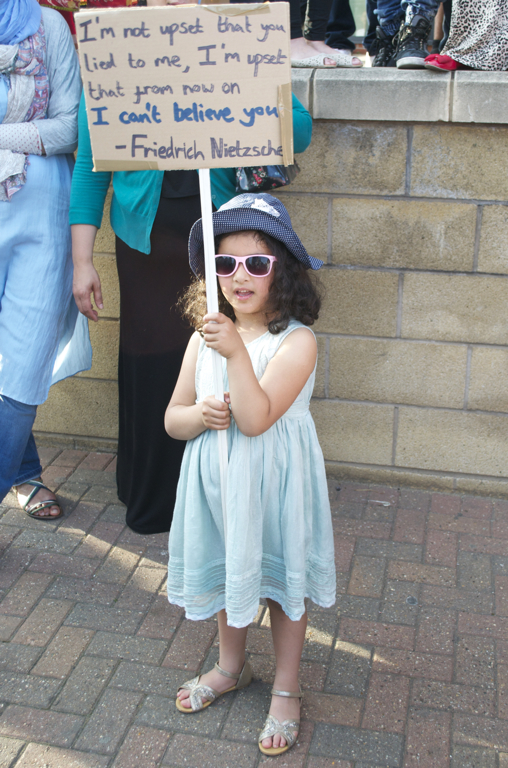 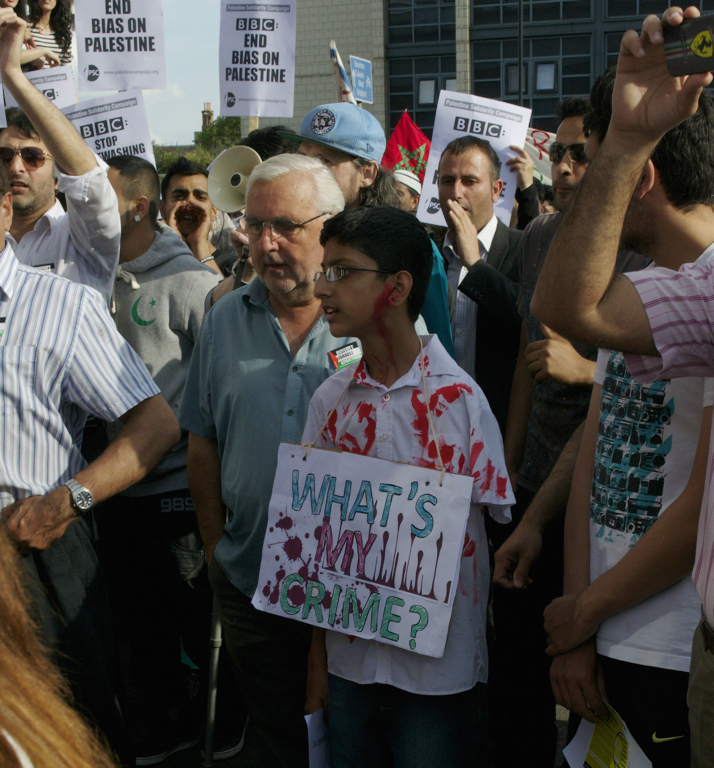 When a few militant palestinians fire rockets at Israeli towns (which is of course a horrific in its own right), the IDF blames Hamas automatically, and decides to punish everyone in Gaza by blowing the absolute fuck out of everyone whether they’re militants, men, women, or children. 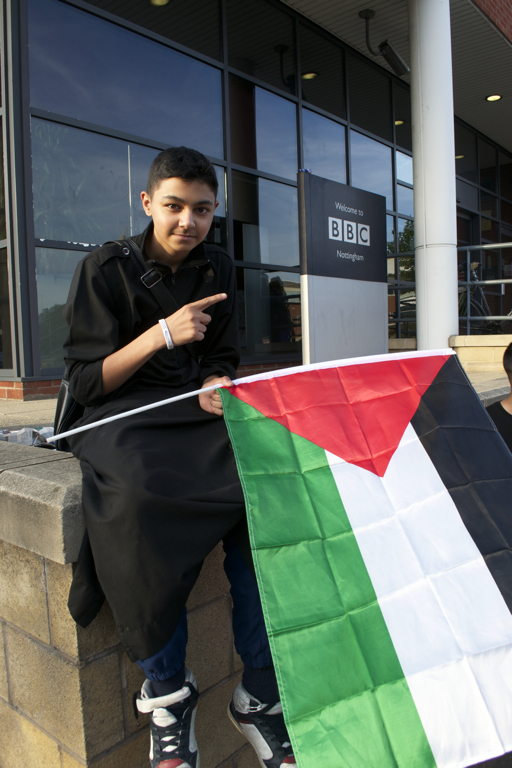 On my way back home Yazmin and Shakilah’s words keep coming back to me. “It’s about being a voice. Getting some attention. Making sure people know. Creating awareness. Educating people; telling them you can have a voice. You can spread awareness this way.

Some people would say what’s the point of coming to a march? But you know it’s not just about being vocal. It’s about brotherhood, you know, people standing side by side, unity, strength in numbers.”

I walked to the back of the shop to meet Dylan, my Korean surf guru for the day. When the general greetings were out…