“Family life is a human right, let the families in!” Gathered outside the Home Office on Thursday afternoon, a small but passionate crowd demonstrated against Home Secretary Theresa May’s rigid family migration laws. 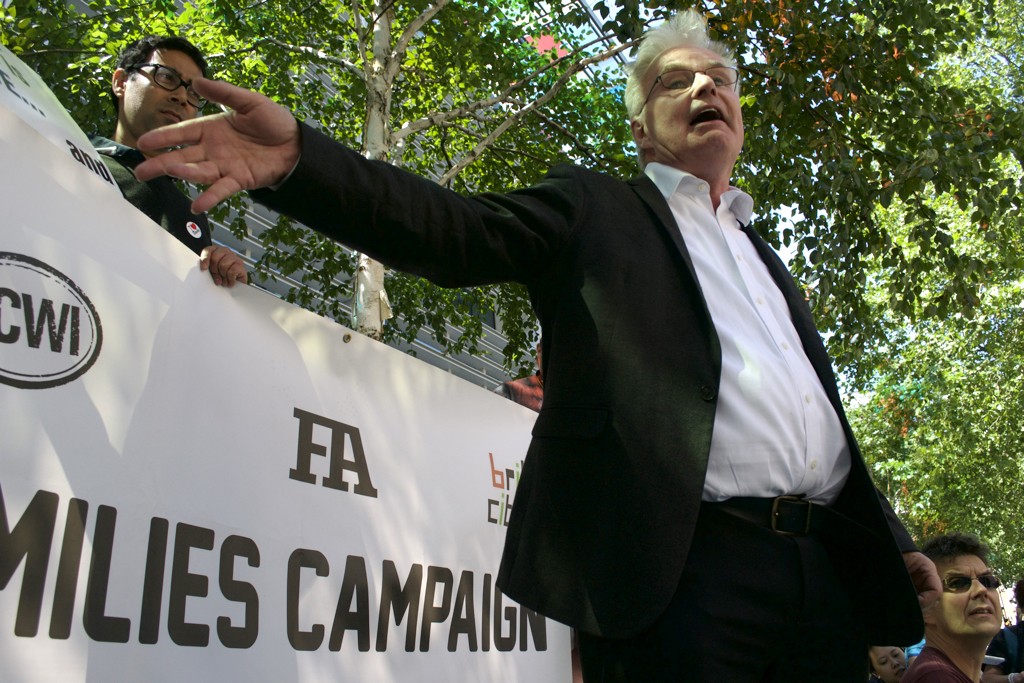 July 9 marked the third anniversary since May introduced rigid financial requirements for all British citizens wishing to settle here with a partner born outside the European Economic Area (EEA).

In order to exercise the fundamental human right to family life, the British partner must earn at least £18,600 a year.

That figure increases to £22,400 if they want to bring in a child. Bringing additional children requires a further £2,400 of income per child.

The protesters, made up of Brits and their partners from Japan, China, India, Thailand, the US, Canada, Australia, Ghana, South Africa and anywhere in between shared stories of how the unjust laws had adversely affected their lives, how the Home Office has constantly mishandled their cases, and how the law denies them their human right to family life. 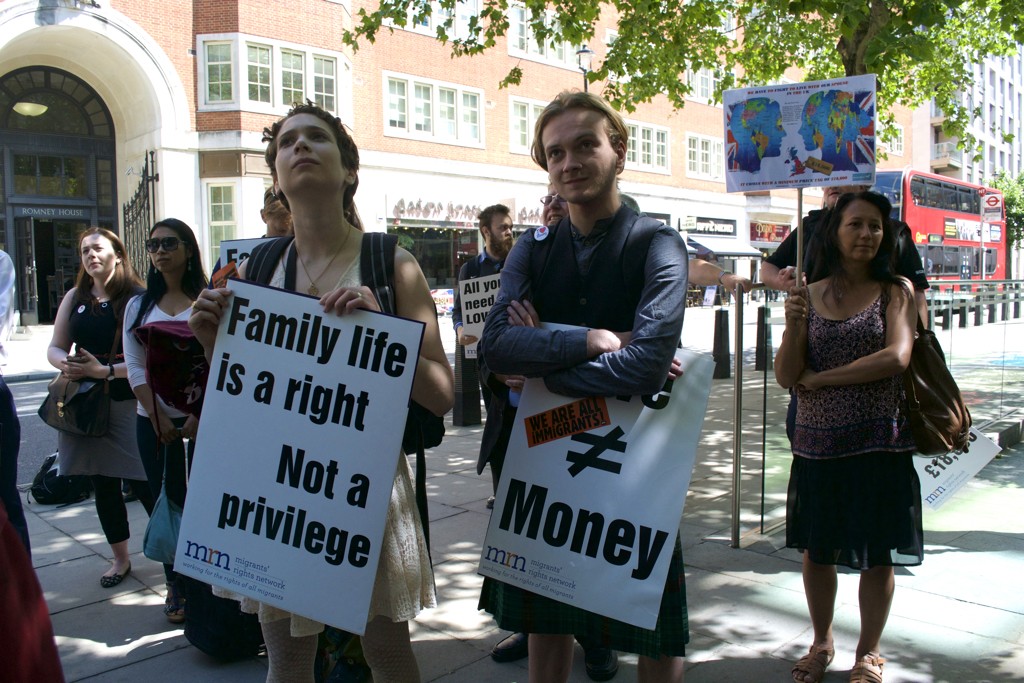 According to a recent study by the Migration Observatory at the University of Oxford, 43 per cent of working people in Britain cannot afford to live here with a non-European partner. “When it comes to sponsoring a non-EEA spouse and a child,” the report states, “53 per cent don’t reach the threshold and that number rises to 58 per cent for sponsoring a non-EEA spouse and two children.”

The policy hits certain people harder: 57 per cent of working women, 50 per cent of workers in their twenties and 51 per cent of non-white workers do not, in the eyes of the Home Office, earn enough to live with the person they love.

Income isn’t the only barrier. Under current rules, until the British partner is earning the minimum salary, the foreign partner must remain in their home country and pass an English language test, whether the couple has children or not, meaning families could be split up for months or even years before they can be together.

The Tory Party once proclaimed in its 2010 manifesto that “strong and stable families are the bedrock of a stable and strong society.” Speaking about same-sex marriage, Prime Minister David Cameron pointed out: “When people’s love is divided by law, it is the law that needs to change.”

Human Rights charity BritCits founder and director Sonel Mehta highlighted the rank hypocrisy of this policy: “If families are the bedrock of our society, why do the Tories consistently put in place rules that are dividing families, that have no respect for rights of children to be with their parents, that have no respect for the rights of babies to be breastfed by their mums?”

May claims the policy was introduced in order to prevent people bringing in foreign relations and then relying on the state to live. While this would seem to fit with the Tory obsession with welfare cuts, it’s important to note that all non-EU citizens living here as a spouse are not entitled to claim any benefits for five years.

“The government brought this policy in for show,” says Chai Patel, policy and campaign officer of the London-based charity Migrants’ Rights Network. “David Cameron made a commitment in the last election that he would, no ifs and no buts, bring net migration down to the tens of thousands. And as we know he’s failed spectacularly at that. I think in the context of the government having no idea how they could control immigration, they just brought in a lot of policies that look good for them, but make very little sense.”

There is, however, a bizarre workaround for couples to stay together, known as the Surinder Singh route. Named after a 2006 British court ruling, it relies on EU free movement laws that circumvent British limitations. It involves living and working in another EEA state and applying for an EEA family permit. Once the permit has been granted, the European law trumps British law and the couple is free to settle down.

Despite growing criticism from Labour, the SNP, Greens and even a few Tories, the government has said little in response.

Green Party leader Natalie Bennett lambasted the policy: “This issue should not be based on money. We have this current, utterly arbitrary figure of £18,600 as a limit to bring in a partner, but I think, very simply, if you’re British you should be able to live in your own country with your spouse and/or children. That should simply be a right.”

SNP immigration spokesperson Stuart McDonald also accused the government of “using families in a political game of football,” and creating “human rights with a price tag.”

Each time I have contacted the Home Office for a comment on this issue, my interview requests have been rejected and instead a PR person points me to the same press release.

It says: “We welcome those who wish to make a life in the UK with their family, work hard and make a contribution. But family life must not be established here at the taxpayer’s expense.” 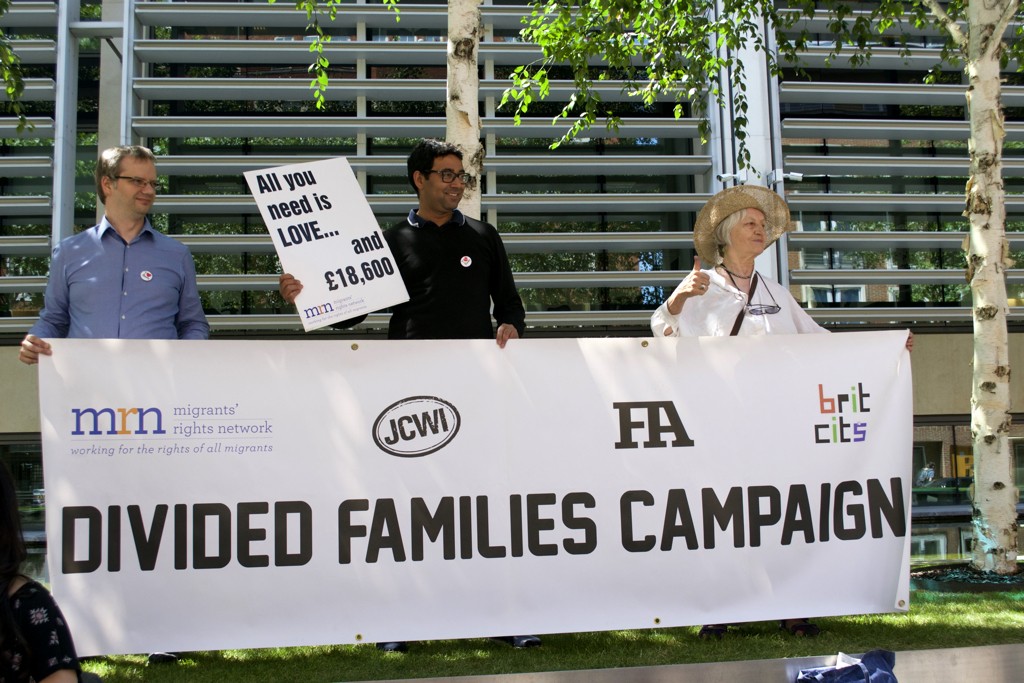 Helena Wray, a legal academic specialising in family migration and a former solicitor, believes this to be more than just an immigration issue. “If you’re a British citizen, you should be able to live in your own country with the person you love.

It’s really an issue about your rights as a British citizen. Now of course that’s not accepted by the government, but that’s really how it is.”

What this policy has created is a two-tier human rights policy: one where if you’re a multibillionaire, it doesn’t matter what passport you have — “Come on in! Britain is good for business.” — but if you earn even one pound less than £18,600, your family is a burden on the taxpayer and must stay out.

A note from the Editor-in-Chimp: This story was originally written for The Morning Star, Great Britain’s only socialist daily. You can also read this article there.

IT WAS ANOTHER BEAUTIFUL MORNING in Thailand. Except we were in Ao Nang. And Ao Nang is a shit town. So we caught a longboat…