Peeking out of my soft sleeper cabin’s window a few hours previously, the moon shone a mysterious communist red, reminding me of the distance from both my home and culture from this land. The heady mixture of apprehension for my first solo trip in China, along with the motion of the train denied me of any shuteye.

I stepped off the train in Guilin. After a full day of travel beginning in the capitalist wet dream of Hong Kong, I was finally in the people’s mainland of China. Filtering out the train station along with a multitude of Chinese passengers, we emerged out of a dark tunnel and were born into the bright light of the morning. I felt like I was watching things from further inside my head, still lurching from the beer and lack of sleep from the previous night.

I bid farewell to the young German who befriended me on the train, and heaved my way towards a collection of mini buses. I wondered if getting on the right one would be a mission within itself. I had studied the Chinese characters that make up Yangshuo just in case. But luckily I was saved from having to use my brain. I over heard a bunch of Russian tourist haggling over the price to Yangshuo. When they’d finally settled on a deal they thought was fair, I creeped over to the back of their group and boarded with them. 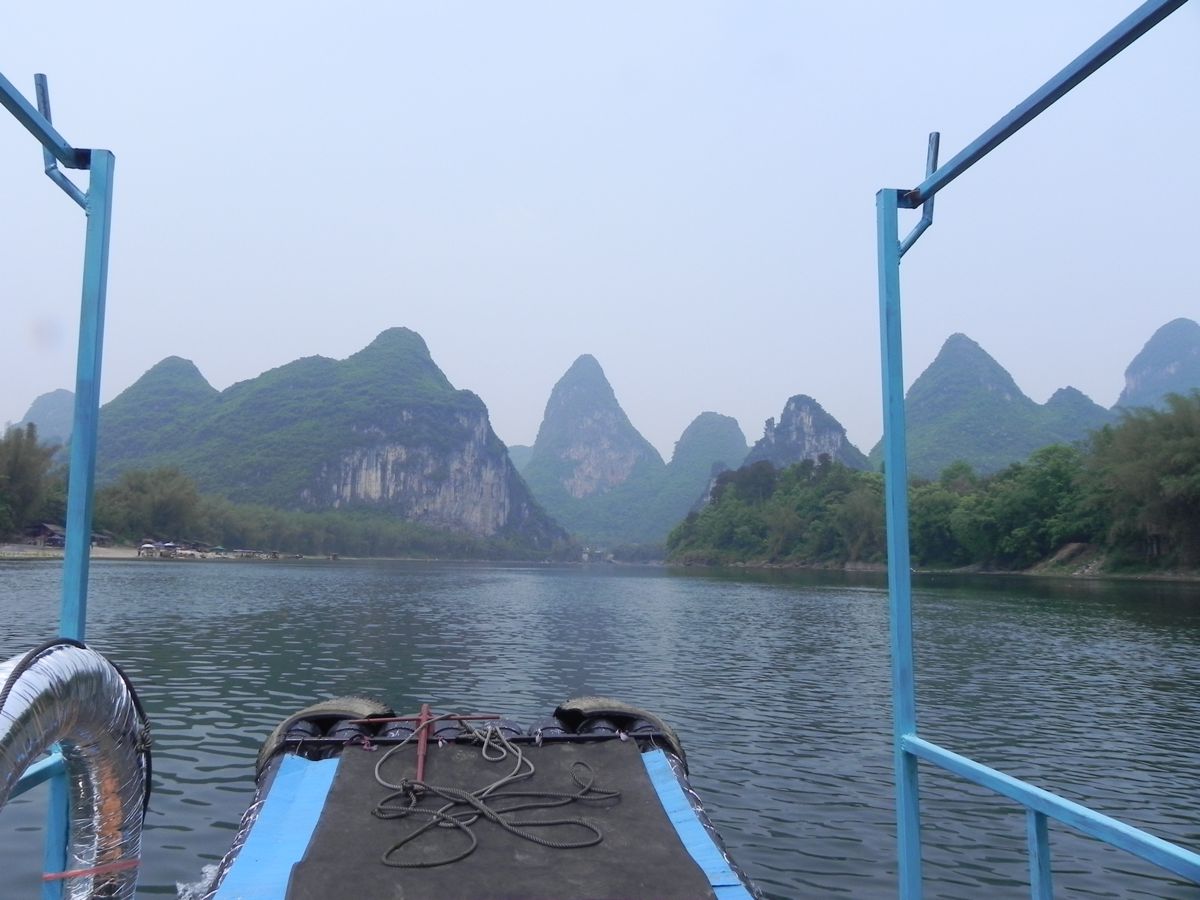 “East or West, Guilin is best” apparently. So you might think I was tapped in the head rushing away from the so called, Pearl of China. However, I just wanted to get out of there as fast as possible. For the past 3 years I’d been knocking about some of the world’s mega cities and needed some time off penguin-walking through crowds, the obnoxious sounds of traffic and the shadows of skyscrapers.

It might seem somewhat stupid then, that I chose a country with a billion people to escape to. But just like the ancient Chinese folktale I was journeying to the west, to be in the company of some of the strangest scenery our planet has to flaunt.

Leaving the city behind us, the surroundings began to become more and more eccentric. For the melting glaciers who carved out these karst mountains over millions of years, this landscape must have been their finest work. I could write all manner of cliches and cheesy lines here about the grandeur of it all. But I’ll spare myself the embarrassment (and you the discomfort), by simply saying what’s written in my journal hundreds of times. 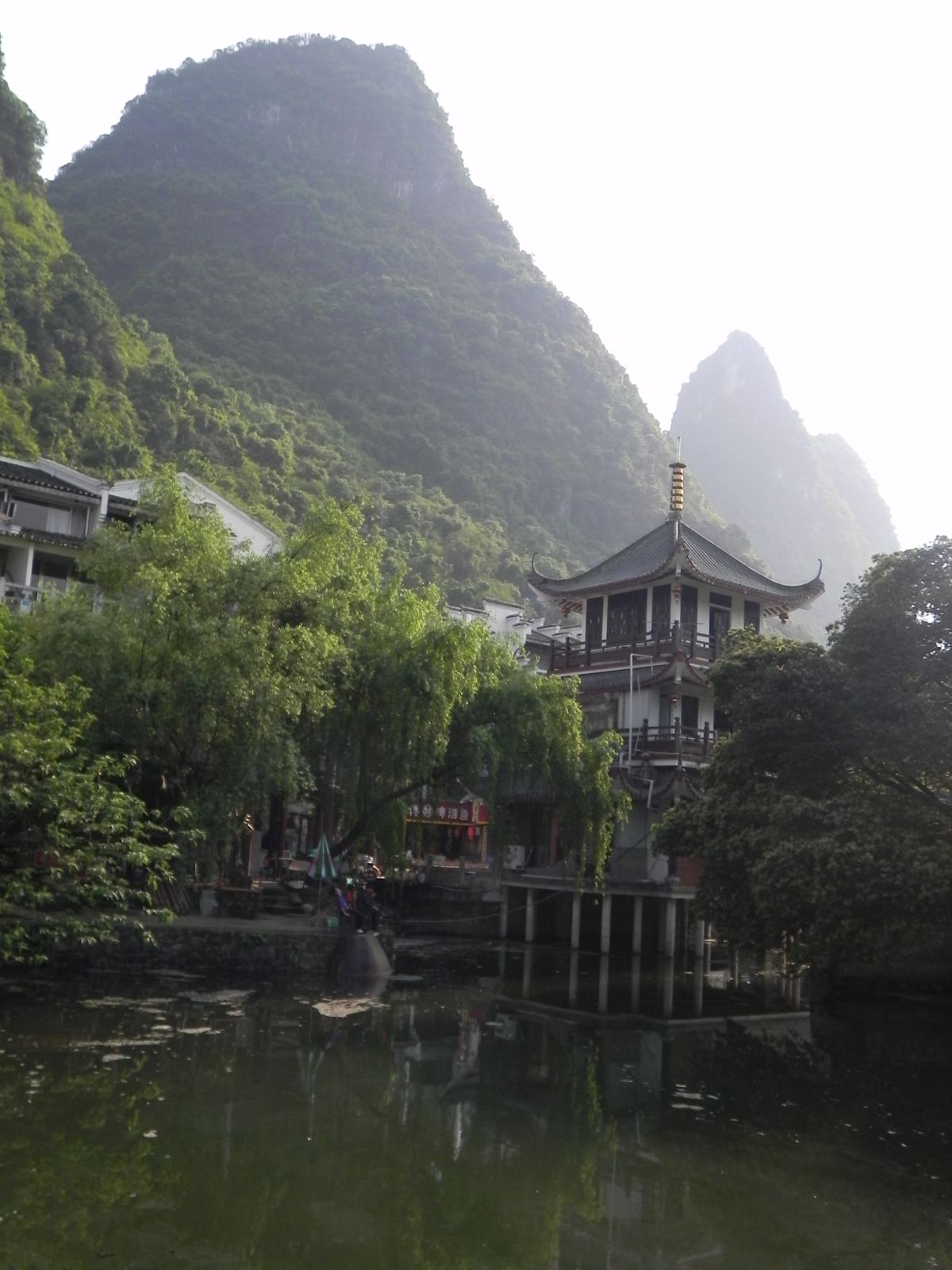 I had planned on sleeping for the whole ride, but gawping out the window reminded me of the backdrop to the Super Mario games of my youth. This prevented me from comatosing and in my head I played a quick few levels. My exuberance was not to last. The saurian old hag beside me did not approve of the daylight blasting in. She wriggled about for sometime and eventually let her indignation be know when, with my nose crunched up against the window, she lent over me, muttered something clearly not complementary and slammed the blind shut. Game Over.

Coming in and out of consciousness, the ride felt like both an age and no time at all. I departed the bus in Yangshuo town and booked myself into the awesomely Engrish named “Cafe too & Hotel” hotel.

Like a teenaged boy with a barrel of tits, I’m overcome with excitement whenever I arrive in a new place (well..perhaps not that excited. Metaphors are hard ). I chuck my crap on the bed and head straight out. I may take a shower, so as to spare the public my sweaty bettiness. But usually, I forgo that formality and just strut straight on out to explore. This time tho, I dumped my body as well as my hulking backpack on the bed. I didn’t rouse again till 12 hours later.

Yangshuo town had probably been eking out a living between the mini mountains, cormorant fishing from the Li river for hundreds if not thousands of lunar years. Eventually the town became popular with backpacking types and the tourism industry for better or worse, showed up. The town has also gained the attention of Chinese tourists with  increasing incomes to dispose of. I was a source of amusement for many these, occasionally posing for photos with groups of giggling girls. A nice boost to the ego.

West Street and it’s splintering side alleys are the focal point of the town. Lined with backpacking hostels, restaurants, bars and shops of assorted tourist crap, you can find whatever you need here. Walking down to the end of the narrow street, one will find the Li river and probably be accosted by eager ladies selling boat rides along it.

With the town being interspersed between so many lime stone peaks, there are plenty of well canopied parks encompassing them. Many of which contain easily scaleable peaks and chinese citizens doing typical chinese things.

Bilian Peak, a small park by the side of the river was my favourite. The fact that you have to pay to get in meant that I was alone and free from pedlars determined to squeeze me of tourist dollars. I came here most mornings to scramble up the peak, chill in the shade, watch the raining of leaves and to drink in both the scene and my emasculating milkshakes bought from around the corner.

My health took a turn for the worse early on. Perhaps it was the water, the change in diet or the amount of chillies in the food, I couldn’t be sure, but my bowels were in a state of disarray. One of the main reasons I came to Yangshuo was to hop on a bike and get in, up and amongst the high rise peaks. Assuming cycling and shitting was a combo for disaster; I opted for some tourist trap actives instead.

I let myself be rushed onto a “traditional” drainpipe raft down the Li river, partook in a cooking course which turned me vegetarian and learnt nothing in a language class. I was kept entertained, but more importantly, I was always within western-toilet range.

The following day, with my guts back in working order, my adventurous spirit could be fulfilled. I headed to the so called experts at Bike Asia where I handed over more chairman Mao’s than most of the other cyclists I met. For their part of the crooked deal, I was given a mountain bike with fucked up handle bars and map, which I think was meant to used as toilet paper.

Undeterred and perversely enjoying my misfortune, I swerved my way through the mental chinese traffic and out into the Mushroom Kingdom-esque countryside. I pushed the bike on for 8 hours that day, keeping close to the dark windy waters of the river, around the artistic crags of the mountains and through a myriad of skint villages. This was the reason I came. Whenever I started to worry that I had gotten completely and utterly lost, I consulted bemused villagers and the other knackered tourists I came upon. Around the half way point of my aimless journey, I managed to pick up some friends.

Together we overcome the calamities that came our way. Ted, a musical genius but total New York city slicker, could barely stay in his seat. My subsequent laughing fits meant I lost count of the amount of the times he tumbled to the floor. The comedy was almost brought to an abrupt end when his chain flew off and in his panic he swerved straight into the path of an on-coming bus. Only Heather, his wife and Dan, our Romanian friend held any grace on their bikes. I struggled on with my handle bars and ate dirt a few times myself.

We’d lost the official path on our bog roll maps long ago and found ourselves on the opposite side of the river. By getting lost we rolled by farms, rice fields, lakes and grave mounds, navigating our way through the back of beyond.

Our dirt track led us back to the river. With no obvious way to go, we disembarked from our bikes and thought about turning back. Meanwhile Dan ventured back to the last village we passed and haggled our way across on two decrepit bamboo rafts. Despite organising everything, he and I were given the short end of the deal. While Ted and Heather’s vessel sported a chair for them to lord it up on as they were punted across, we had to balance upright on ours. Dan grasped onto his camera tightly as I held the bikes in place with my feet. I became giddy with excitement and started to blurt out the tune to Hawaii 5-0. Neither Dan nor our gondolier recognised the tune. Bar a few close encounters with psychotic lorries we made it back unscathed and richer for the whole experience.

Perhaps the highlight of Yangshuo County for me was Moon Hill. Don’t let it’s name fool you. This is no measly hill, but as a sign at the bottom will attest, one bloody steep mountain. It is so named due to a half moon shaped hole two thirds of the way up, at the base of which one can climb no further, without full blown rock climbing gear that is. You are instead treated to intense panoramic vistas. Having cycled 8km, then scampering up the fucker, I was a stinky mess by the time I got up there.

A few others had made the top too, including mentalist rock climbers reaching for piss knows where and as usual for China, hawkers selling pointless shite. I was overcome with kodak conniption syndrome. I wrestled with my camera’s settings searching of the perfect photograph to instil envy in my friends.

Eventually the fit withdrew. I sat my clammy arse down upon a rock and stared off into the distance, contemplating on the forces and vast amount of time that chipped away at this place.

I was lost in thought and awe for sometime up there. 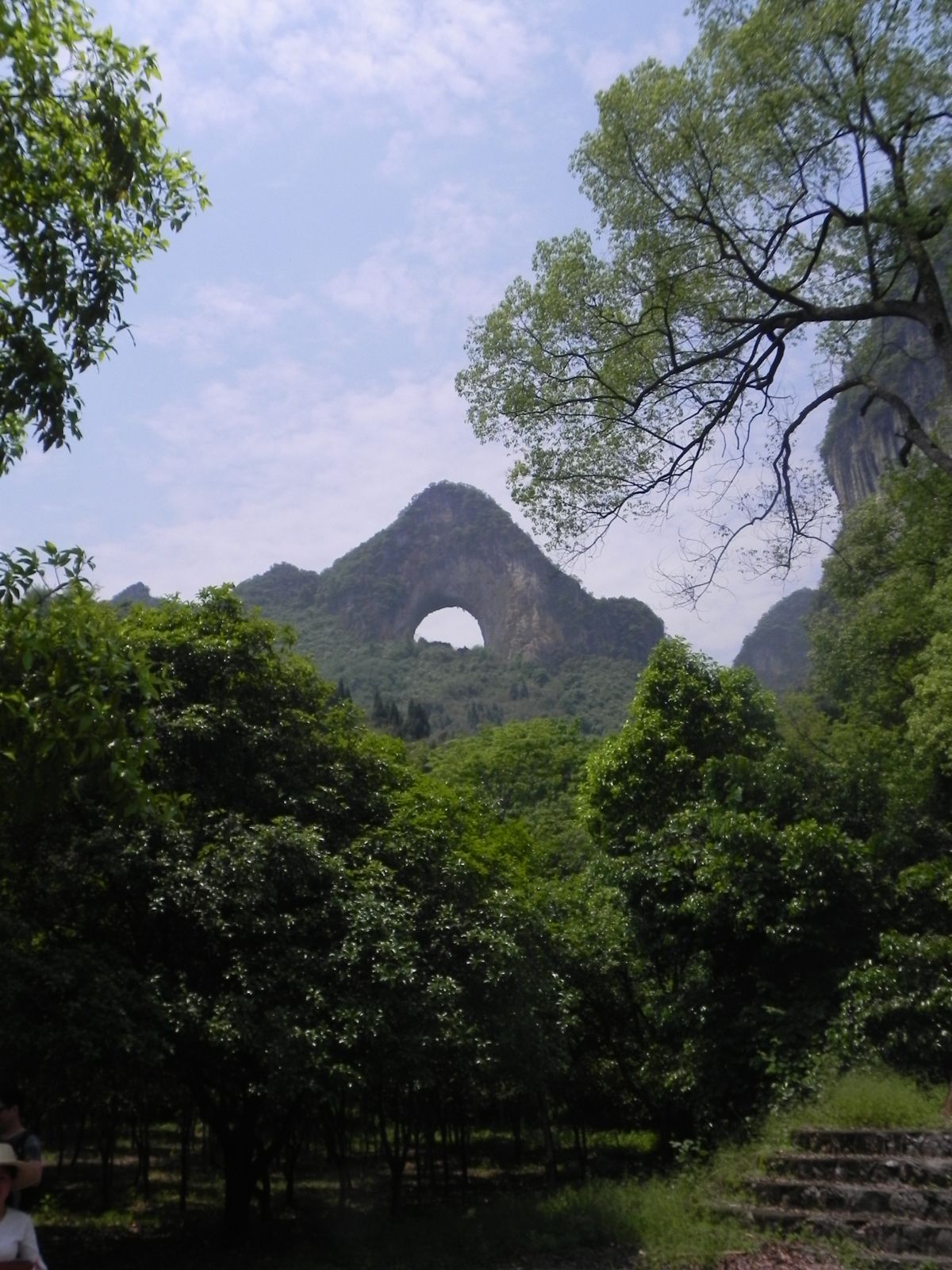 The vehement buzzing of a fly whizzing around me brought me back to reality. For the fly, my sweaty demeanour must have felt like all his Christmases had come at once. I thought it best for me to leave, before word spread to his antagonising little friends.

Yangshuo had given me some serious diarrhoea, turned me vegetarian, ached my muscles and hurt my arse. But having thus swanned about there, I’ve sung it praises ever since. I’d say that Yangshuo is up there with the best of what China has to offer. If you can put up with the touristy vibe, then Yangshuo is a great place to base yourself and to explore the quirky landscape.

That evening I dined upon a rooftop. Being midway between the ground and the mountain peaks I had an phenomenal birds eye view of the whole town. As I munched on the sweet and sour tofu my lips sizzled on the chillies. The sun was setting between the karst peaks and I absorbed myself in it. Yet another beautiful sight. It was a fitting end.