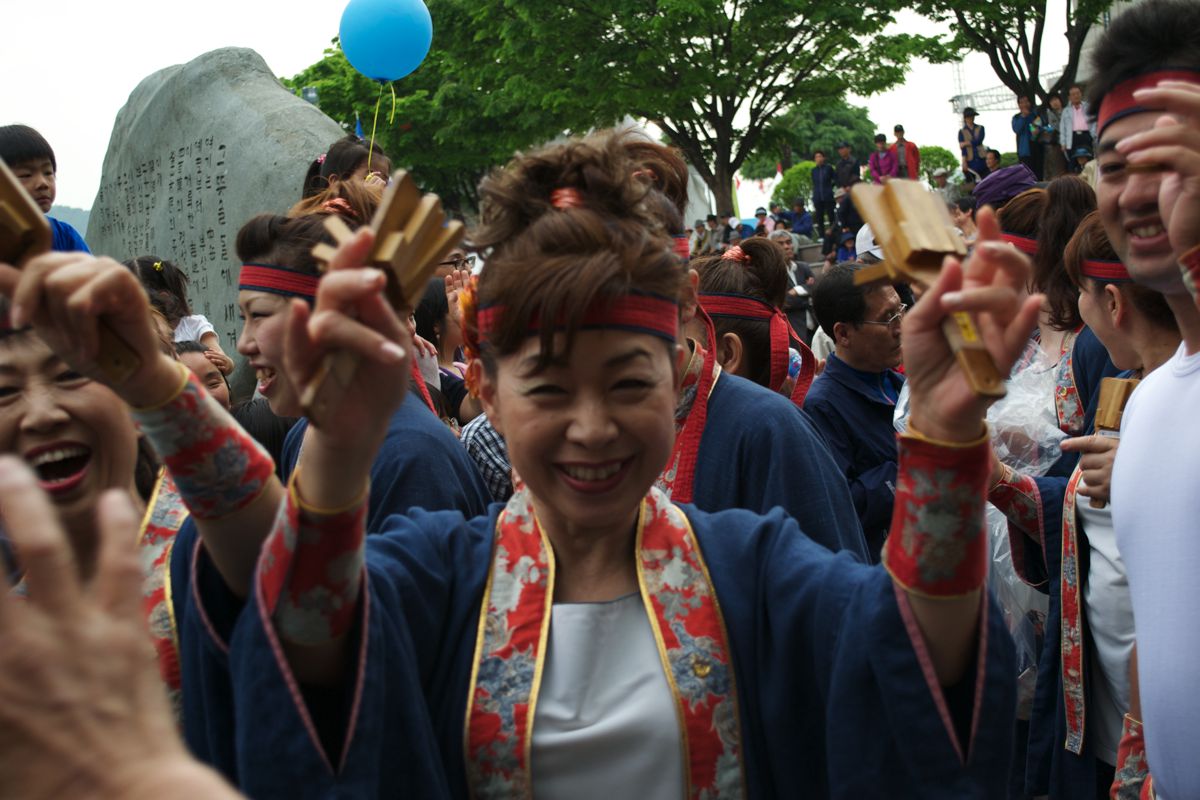 There was once a time when Japan and Korea weren’t hurling abuse, colonising, squabbling over rocks in the sea or blasting half-baked missiles over each other’s sovereign territory. In fact for most of their shared history Korea and Japan had been at peace with each other. The Joseon Tongshinsa festival, held high above the busy streets of Nampo-dong in Yongdusan park, Busan; is held in the first weekend of May to commemorate those peaceful times.

The actual Tongshinsa were a series of diplomatic missions sent by the Joseon Kings to the Shoguns of Japan between 1392 and 1811. Their official purpose (as well as wearing big funny hats, holding colourful banners and riding in outlandish palanquins) was to promote peace, trade and to exchange culture. The last Joseon emissaries were caught between the shit and the fan of the Meiji restoration when things ultimately led down a dark path. Now in its 10th iteration, the festival ignores the atrocities of the past instead focusing on the similar music, dance, food and alcohol the two cultures share. On the  Saturday afternoon the festival properly kicks off with a mass parade through town.

I arrived at the park early trying to avoid the inevitable claustrophobia, this is Korea after all. Plus with it being Children’s Day there were going to be many more bodies crammed in than usual. I chilled out in the early summer sun with a Cass, watching the ajumas practice their drumming and trying to make sense of the traditional costumes.

A quick walk around and I stumbled upon some free booze offered by the tourist representatives of the Japanese cities on the old Tongshinsa root to Edo (Tokyo’s old name). The rest of the afternoon took on a new shine after a few shots of assorted Sakes.

“Ah, Poto. Poto. We. Poto,” the two young Korean lads dressed as traditional guards with painted on stubble, babbled at me when they glimpsed me sitting alone. They were the ones dressed in ridiculous costumes, yet they wanted a picture of me. I obliged and the boys could barely contain their excitement as we got down to the usual shooting of shit; “What’s your name?, Where are you from? Manchester United. Ji Sung Park. Wayne Rooney,” and all that jazz. Jong-Hwan and Sung-Ha, currently doing their mandatory military service were to be involved in the coming parade. As well as protecting the freedom of South Korea, their duties that day included pushing an absurd palanquin around, complete with replica dignitary. When I asked what the whole parade was about, the boys declared “Peace. Korea. Japan. Freedom. Love. Peace.” 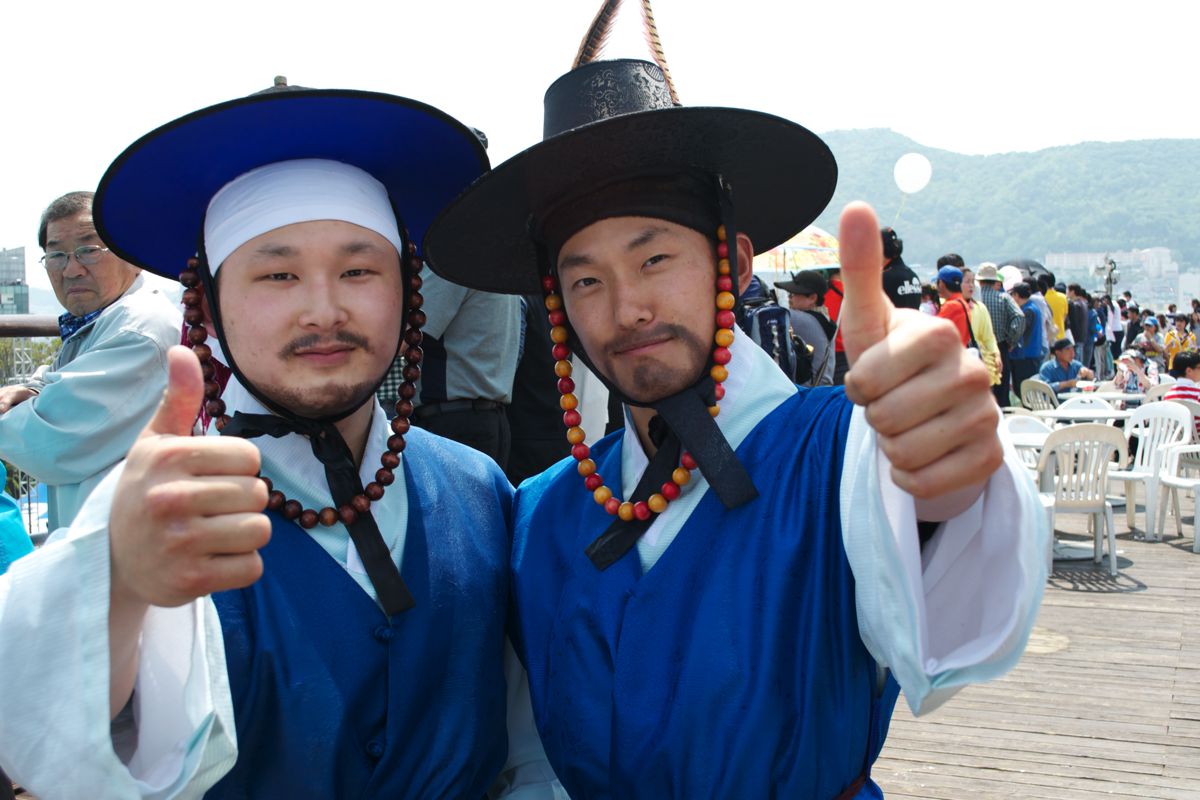 Later, on my way to shoot some bored looking guards with my camera, I was distracted by a blurted out cry of “Weiguk.” I turned to face a gaggle of waving, smiling students spreading out a bed sheet and thrusting a marker pen towards me. I couldn’t quite figure out what their deal was (something to do with being keepers of culture), but they seemed amiable enough and so I signed it anyway. I figured the the soldiers words would be quite apt, and received a big cheer when I finished. I didn’t have the heart to tell them they’d misspelt keepers.

Turning away from the group, I bumped into Aleck, a lanky blonde guy donned in a Japanese Kimono. He was on his way to find some refreshments and so I escorted him to the nearest snack emporium. Aleck turned out to be a Canadian teaching English in a middle-of-nowhere town in Hiroshima Ken (province). He was also to be involved in today’s procession through town, hammering on a drum for his local Taiko Ren (Taiko; traditional Japanese drum. Ren; group, band, gang, posse).

The park was starting to get busy now, and kick off was fast approaching. Standing outside the 7/11, Aleck amazingly recognised the sound of his Ren’s beat above the prevailing din. He ran off to fetch his drum and join in, while I muscled my way into the crowd formed around the impromptu performance.

The Ren, numbering around 30 consisted of drums, pipes, Shamisens (a Japanese guitar) and two groups of wicked dancers who swung their hands in the air and flicked there legs about in a drunken master sort of way. One of the troops of dancers, all women, wore bright white and pink kimonos with wide black belts across their waists. Adorning their heads were reed hats that sloped off towards the sky. Maybe it was their dancing, their outfits or just the fact they were Japanese, but I fell in love with these ladies and has to actively force myself to stop staring. The other dancers, mainly men and children, resembled thieves or drunkards as they wore only the top half of a Kimono, shorts and a bandana tied up under their nose. In their left hand were paper lanterns which they managed to keep upright, despite all the rolling and jumping about of their body. I was particularly transfixed by an elderly dancer with a gangly beard, who Aleck informed me was in his 70’s, as he youthfully bounded around in a hypnotic like trance. 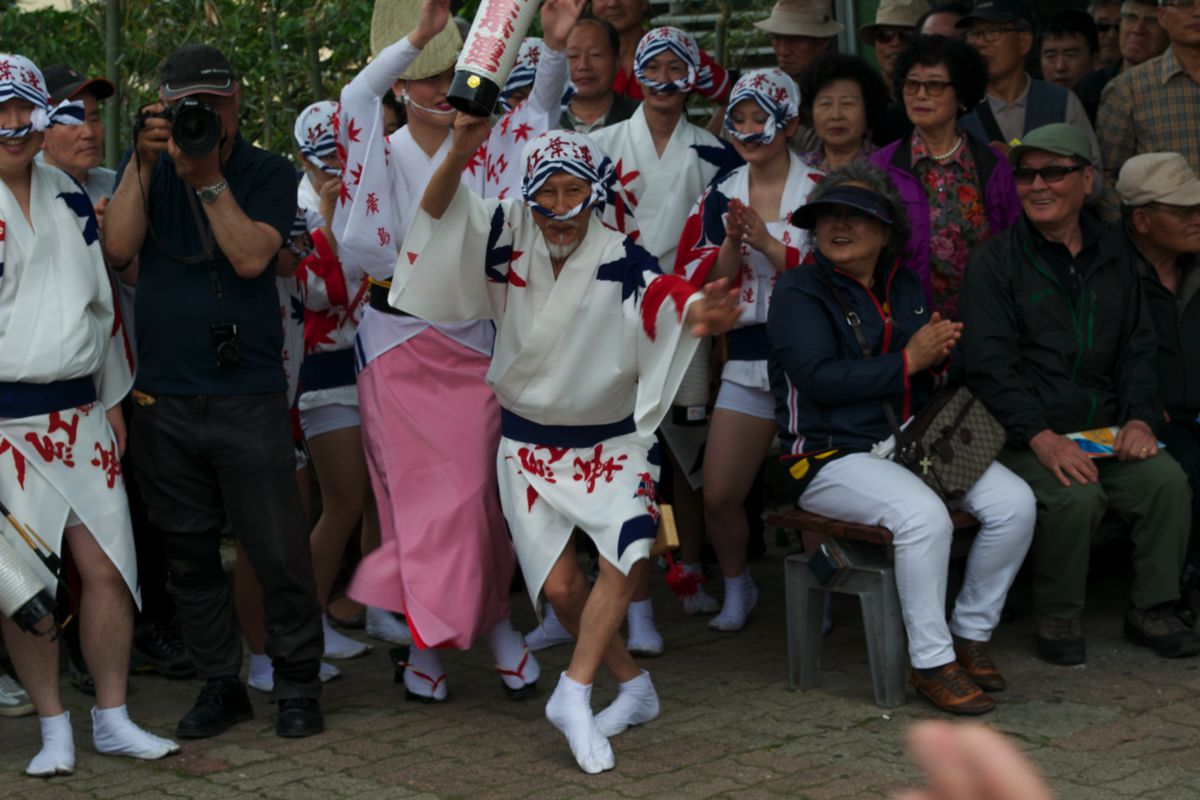 The crowd clapped furiously as the group finished their show, leading to a flurry of photos and bi/trilingual conversations. I congratulated Aleck and the others in the Ren, dusting off the tiny snippets of Japanese that I could muster.

The various beers and couple shots of Japanese Sake had served their purpose as a social lubricant. Excited by the dancing I wanted to give it a shot. One of the teenage dancers laughing at my poor imitation, handed me his paper lantern and encouraged my stupidity. The band enjoying my shenanigans, were about to strike up again drawing back the crowd that were slowly dispersing. I’d not consumed anywhere near enough rice-wine for that, so I handed the lantern back to the grinning young lad and let him show us how it’s done. A bang of a gong alerted the bedraggled crowd lined up along the street to the start of parade. I bid Aleck’s Ren good luck and took off to the front of the procession.

The parade was led by a coalition of Joseon guards and Samurai warriors. The crowd danced, photographed and applauded as hundreds of costumed paraders stomped, banged and sang their way by. The excitement of the parade was palpable. Following the parade from the top of Yongdusan Park to its conclusion along the busy Independence Road in Nampo, I darted up and down by its side photographing like a zealous paparazzo.

Check out these shots: 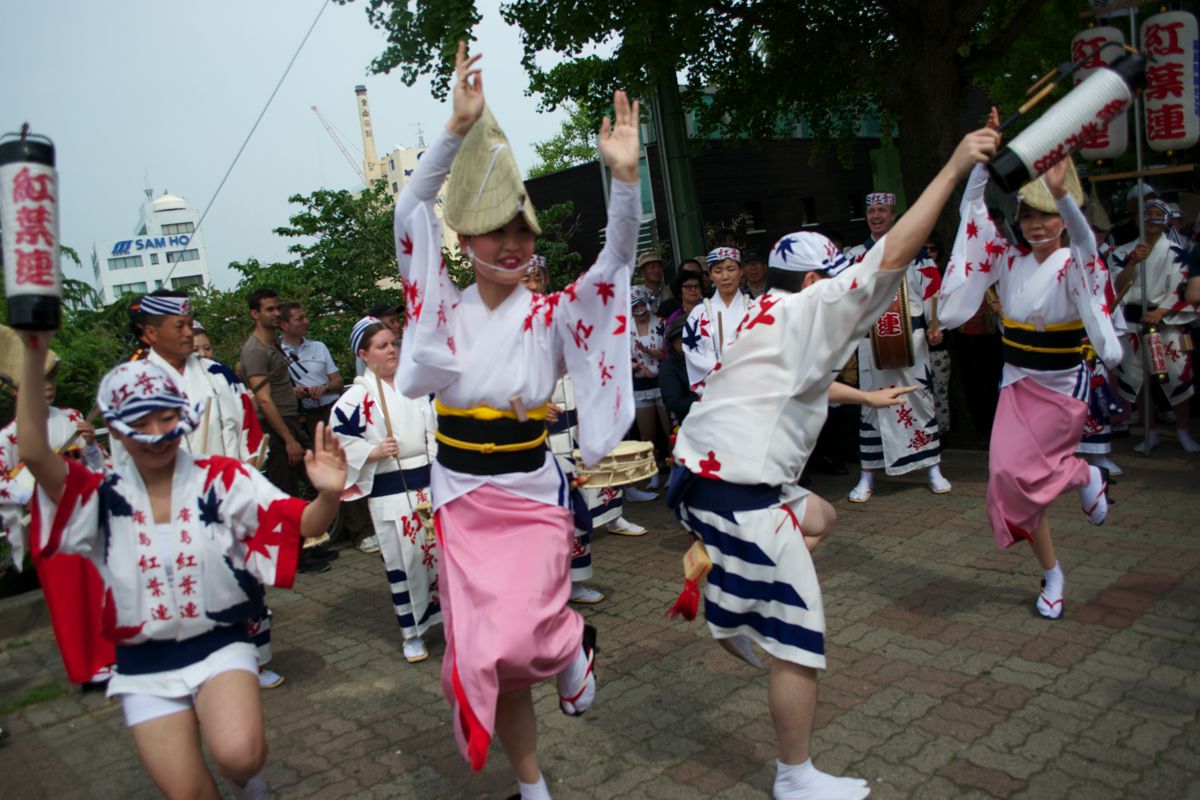 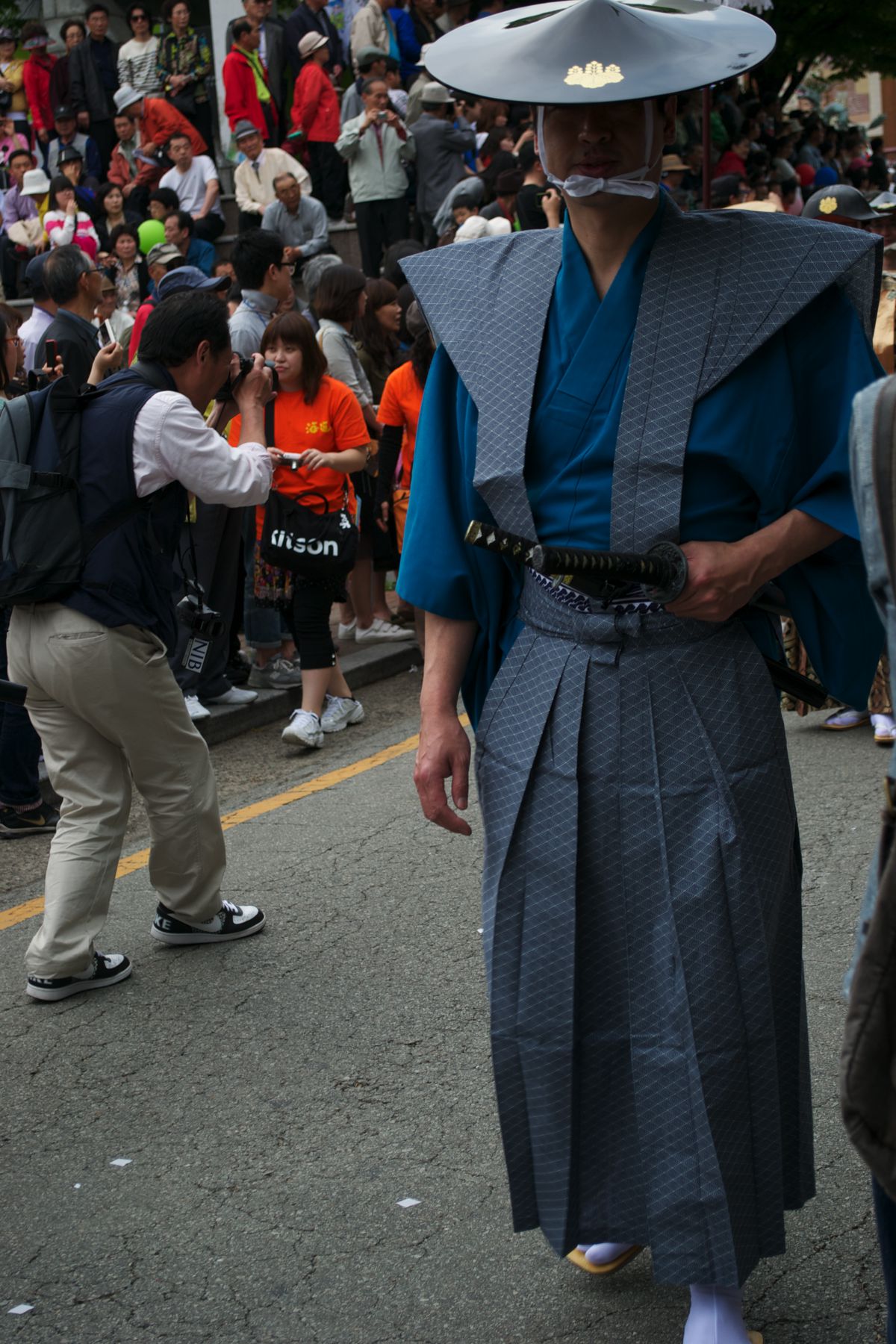 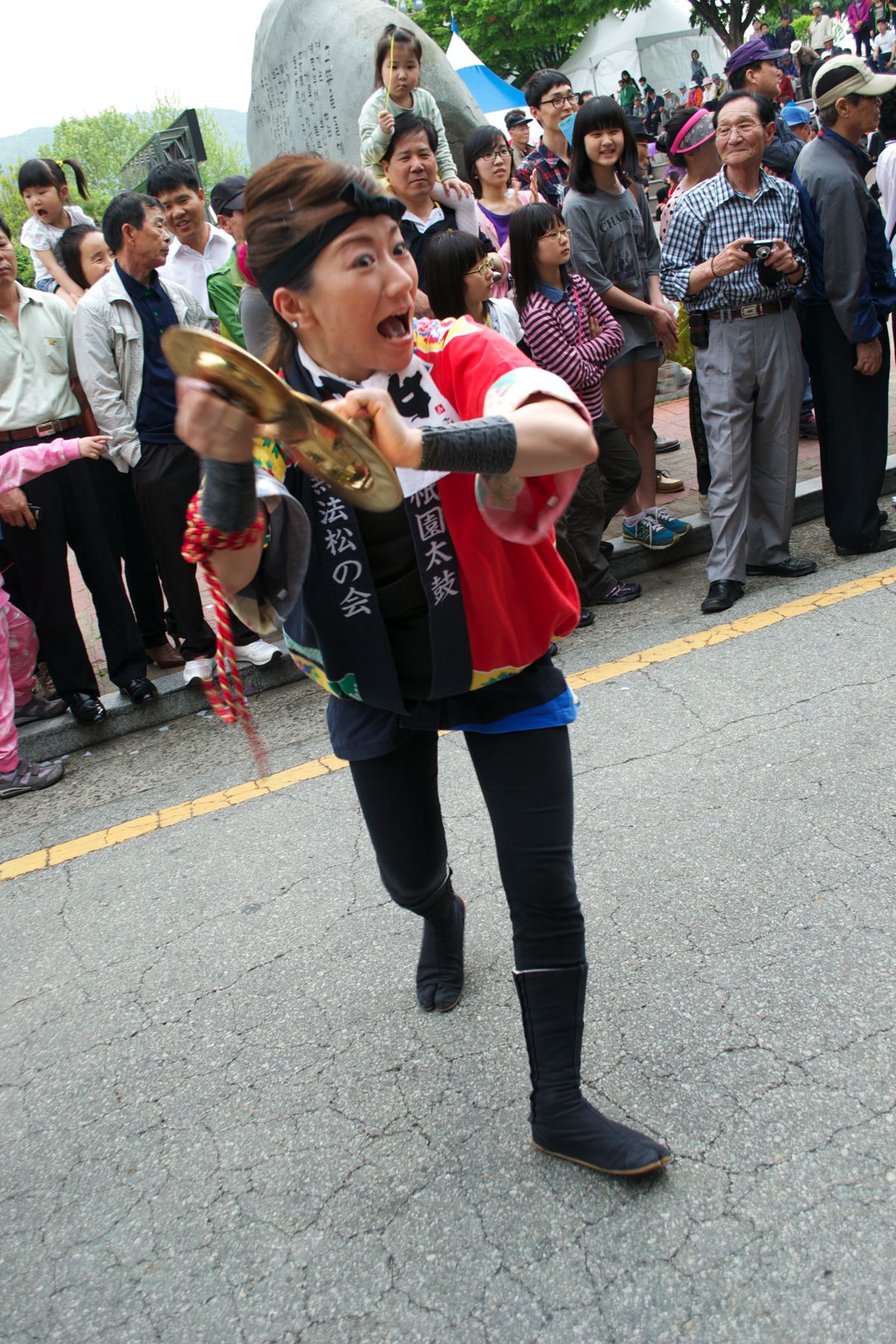 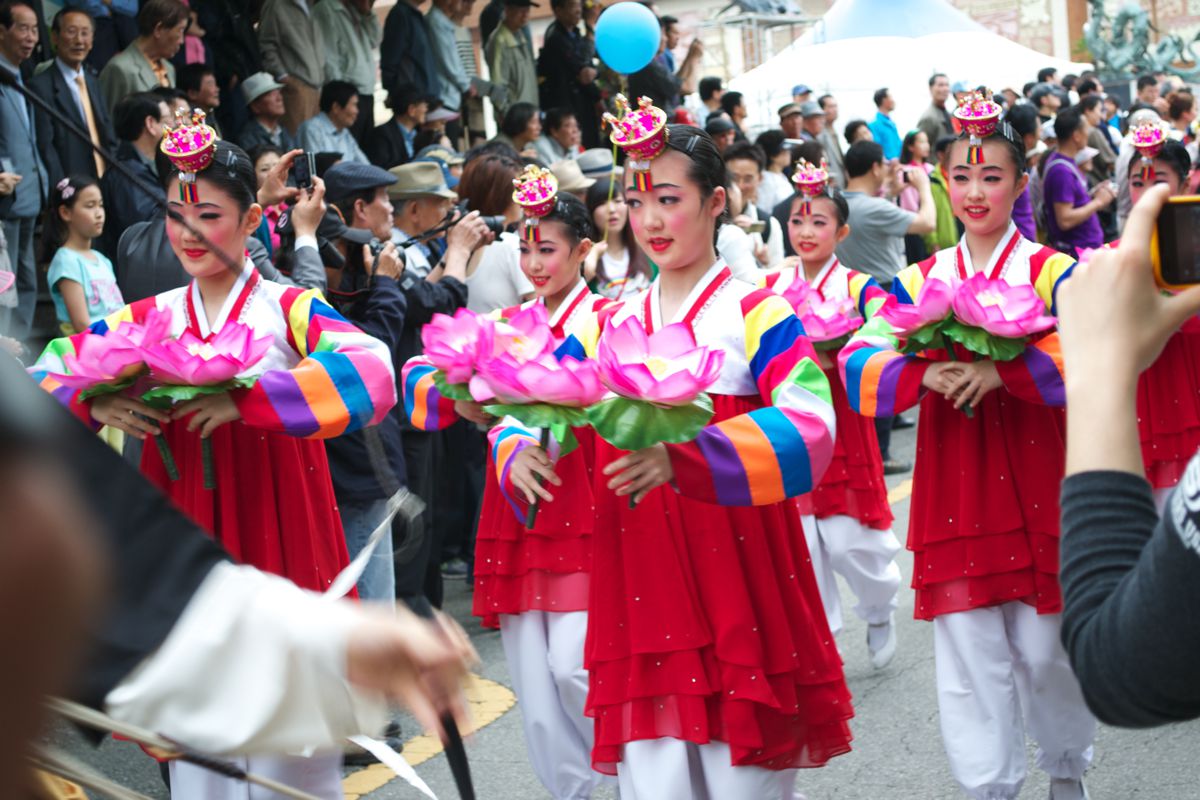 My experience at the the Tongshisa festival served to remind me of the best parts of living in either the Land of the Morning Calm or Rising Sun. All you have to do to make someone’s day is simply be a foreigner when talking to them. If you inject a bit of their language into the proceedings, then they generally lose their shit with excitement, congratulating you no matter your poor pronunciation or complete irrelevance to the topic. This is much more obvious in South Korea where people will make their intentions to talk to you glaringly obvious. The Japanese on the other hand, appear a little more reserved but are just as happy to talk to you when you get going.

As great as the parade was, it wasn’t the highlight of the whole experience for me. The enthusiastic and friendly nature of the Koreans and Japanese people I spoke to and danced with. Comprehending the strangeness of their ancient customs and dances compared to that of my own. The admirable intentions of the festival to heal old wounds and watching the Koreans enjoying, cheering and speaking to the Japanese people they usually harbour such animosity towards. These are the things which will stick in my mind.

If your down in Busan and didn’t check this festival out, I highly recommend you do so next year. It’s not often that you can dance like a drunken prat to the cadence of Korean and Japanese drums. 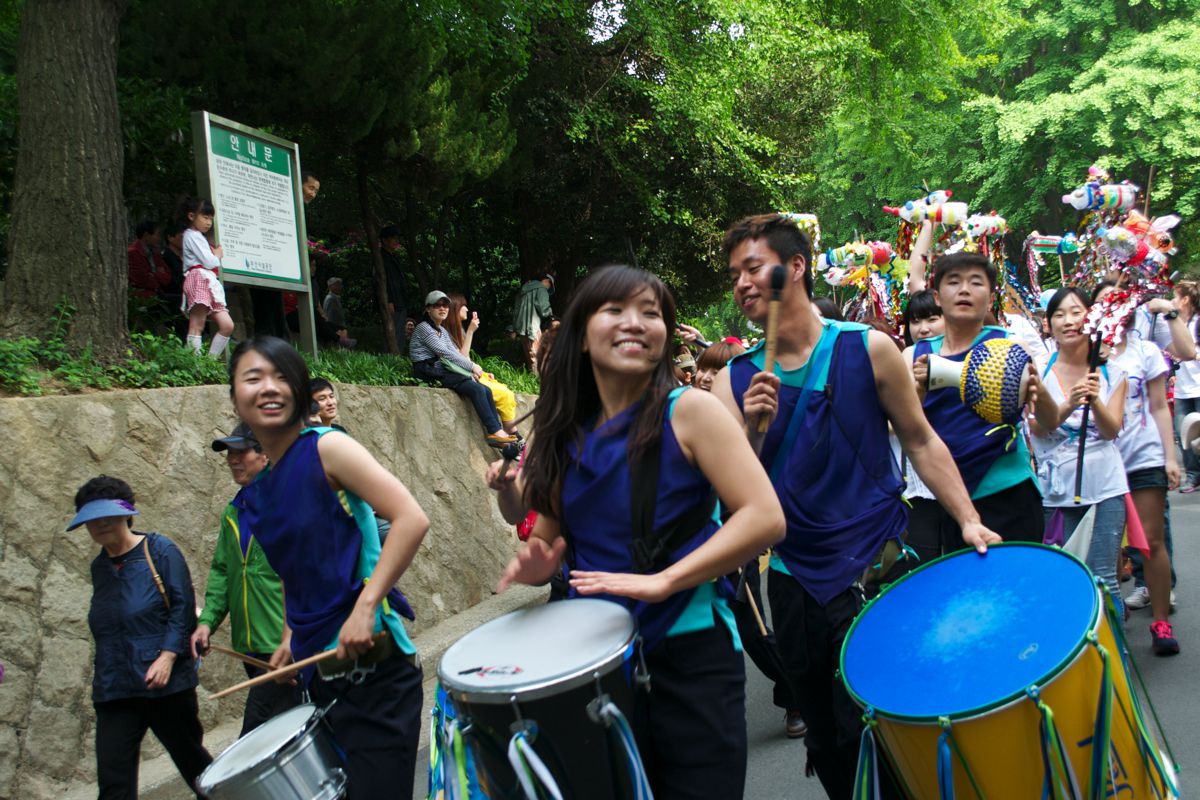 A note from the Editor-in-Chimp: You can also check this story out here on Busan Haps