A couple of things struck me right away upon exiting Kuala Lumpur International Airport. One: The unbearable humidity; and two: The multiculturalism.

Having spent more time than I’d like to admit knee-deep in the rigid homogeneity of South Korea, I found the intermingling of Malay, Indian, Chinese and European people / food / architecture / culture in the capital fascinating.

Escaping the capital for a day trip to the Batu Caves (more on that place soon), I found myself enraptured by KL’s Indian / Hindu culture. I’d gone there mainly to see our cheeky simian cousins cause all kinds of mayhem to the tourists, but came away intrigued with the sub-continents religion of choice. 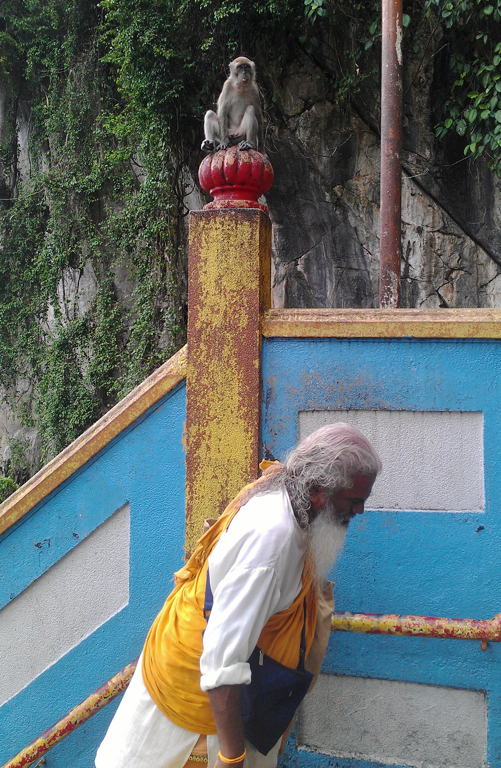 From my non-educated, superficial and mini experience with Hinduism (and Buddhism), it seems to me that both religions aren’t really religions at all, but more of a loose connection of philosophies, a way of life which basically boils down to: “Don’t be obsessed with yourself. You don’t need all that stuff. Think of the planet, nature, and other forms of life.”

It seems to me that the 21st century would run a lot smoother if we embraced those philosophies, rather than sticking with the hell-fire, dogmatic, gun toting, science denying, woman-hating, homosexual fearing, kiddy fiddling, materialistic, self aggrandising bullshit the powers that be spew forth. 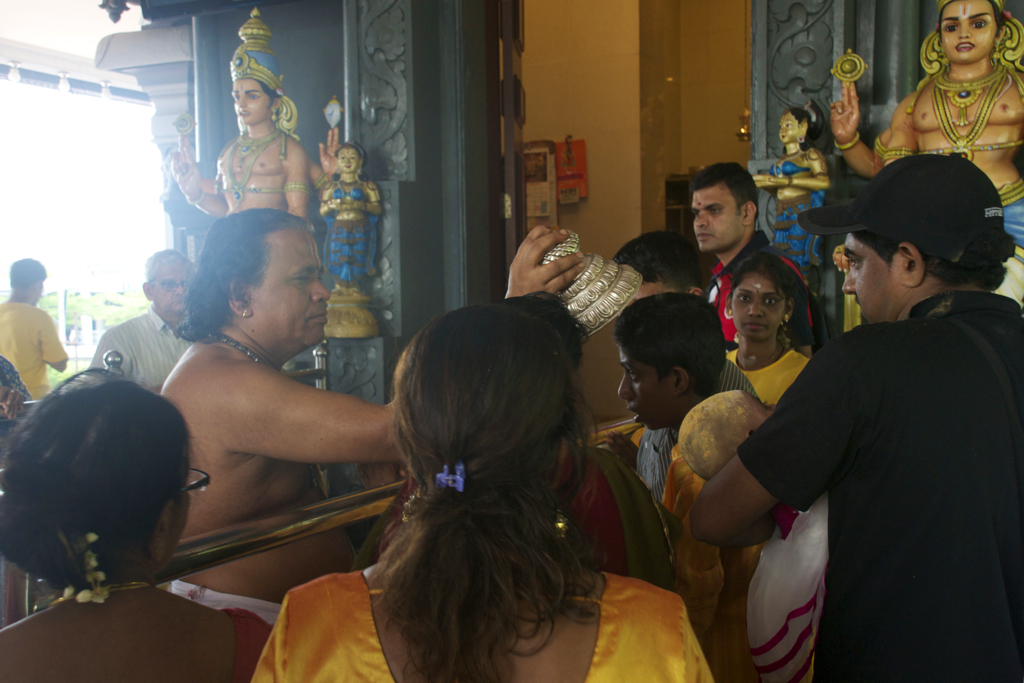 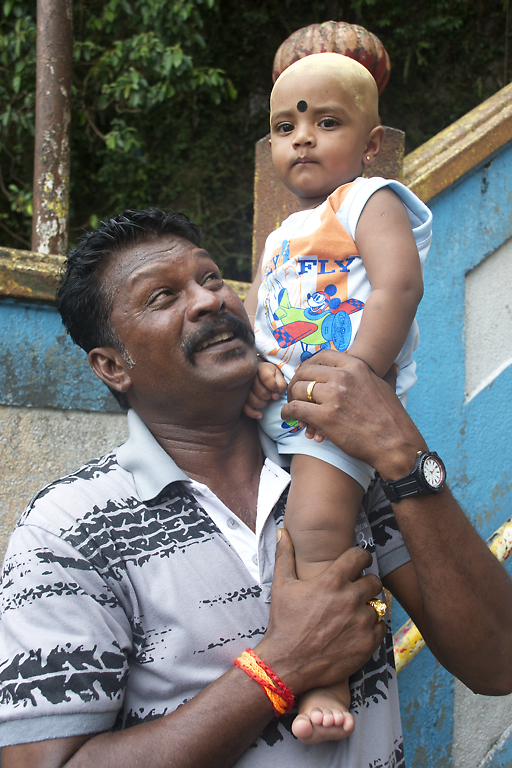 The day before I was due to leave KL, I rushed out of my cheap-arse hostel in order to photograph Chinatown before the sun went down. I turned round random corners and blind alleyways, getting myself nice and lost. 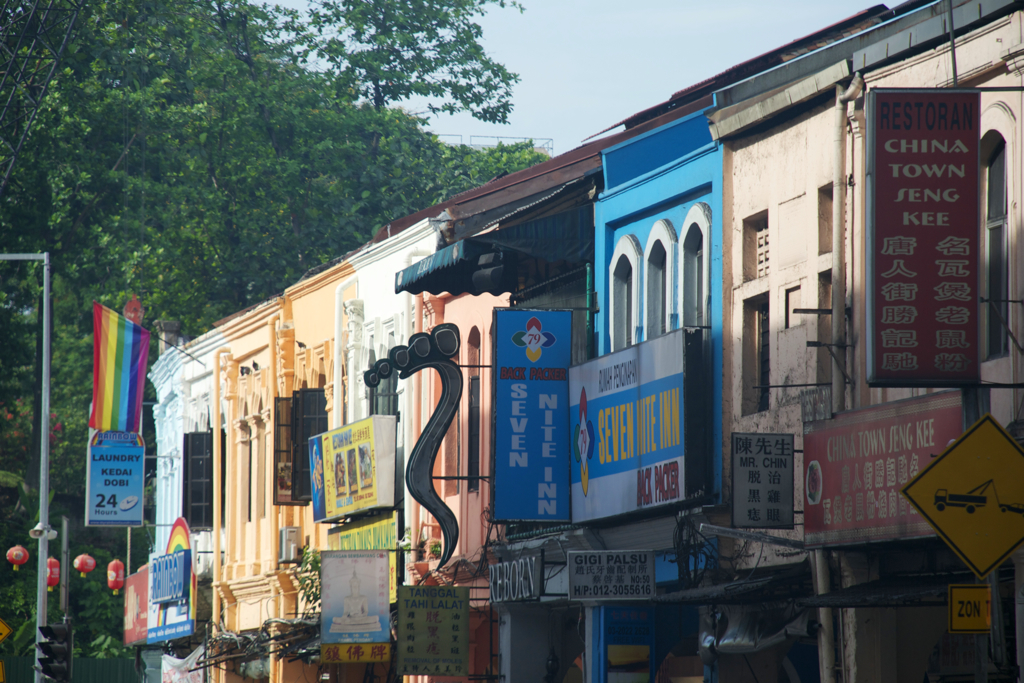 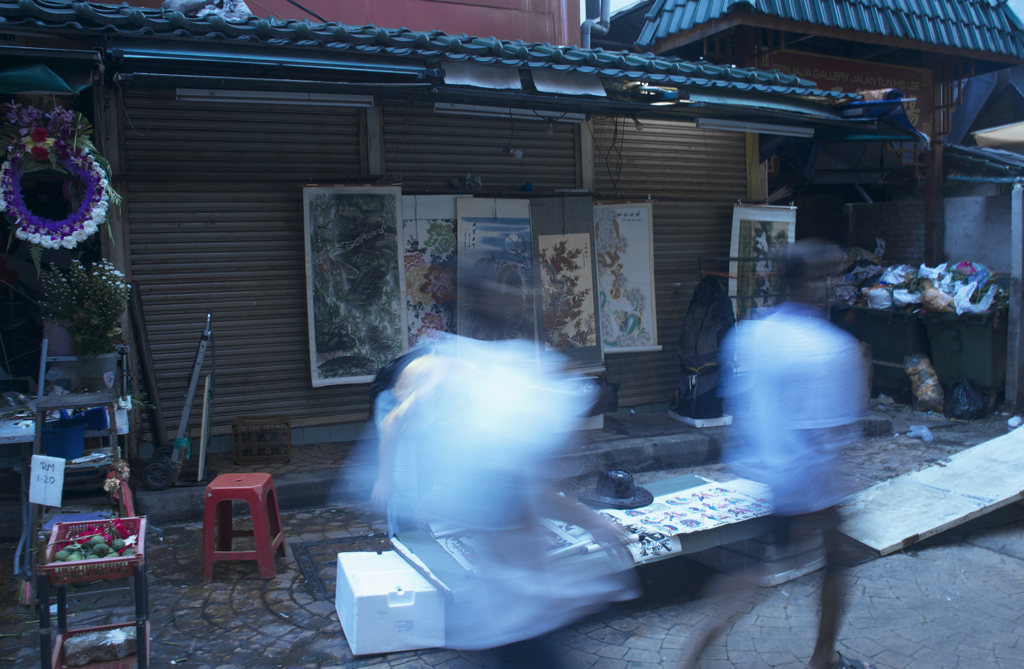 A man in Chinatown peddles his tourist crap

I’d gone out in search of your typical Chinese accoutrements, but found myself instead drawn to the Sri Mahamariamman Hindu temple, where a groovy beat, and high pitch prrrp of a trumpet drew me in like a snake to a turban-clad hypno charmer. 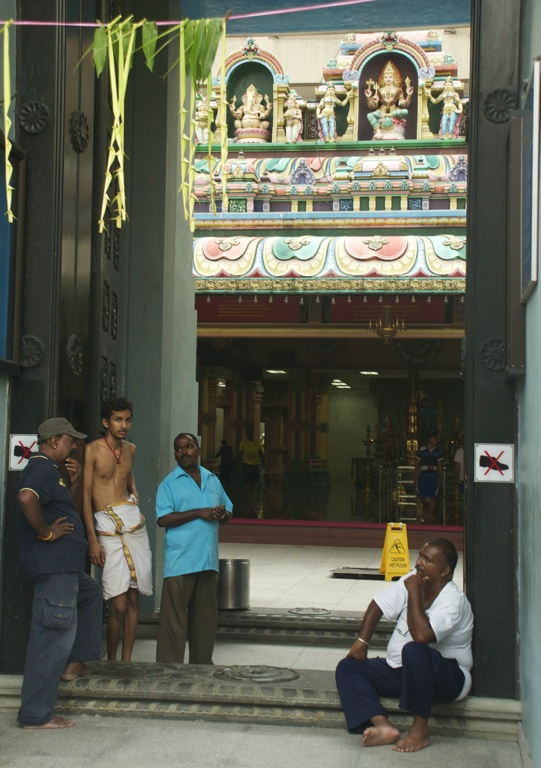 Being as it was my first time in a Hindu temple, I furiously photographed everything inside and worked up a nice thick layer of perspiration in the process. I noticed the sky had turned a very pissed-off-grey just as an enormous bell joined in with the groove. The priests, shirtless, painted and saronged, busied themselves adorning the scared totems with flowers and incense. The Hindu faithful soon began to pile in. I sat myself down in a corner to de-sweat, interpret the divinities, and try to take everything in. 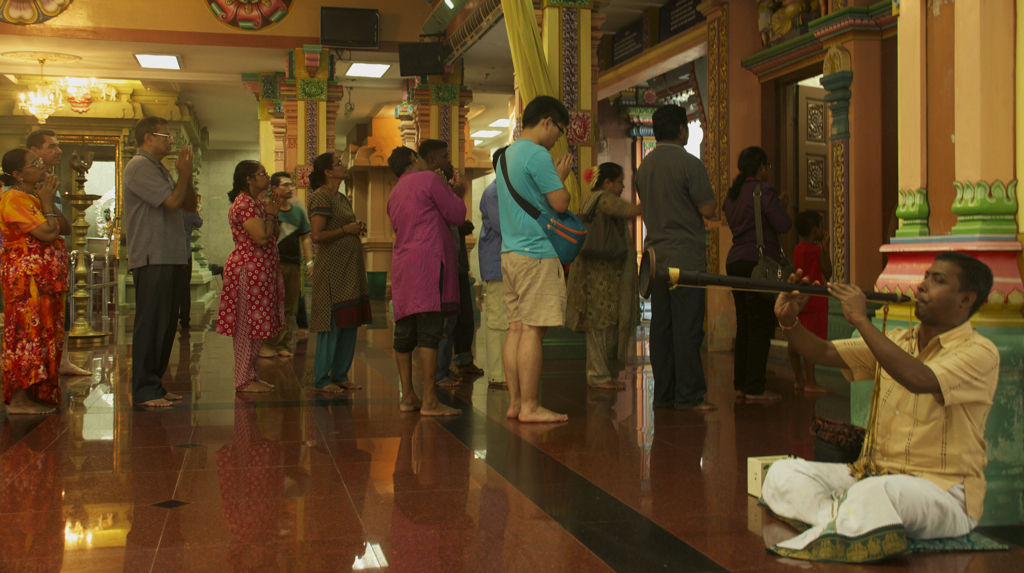 I sat clueless for quite a while, and decided it was time to be getting back. I was about to leave when one of the priests beckoned me over with a huge grin to try some food. I think he took pity on me since I looked like I’d just ran a marathon. 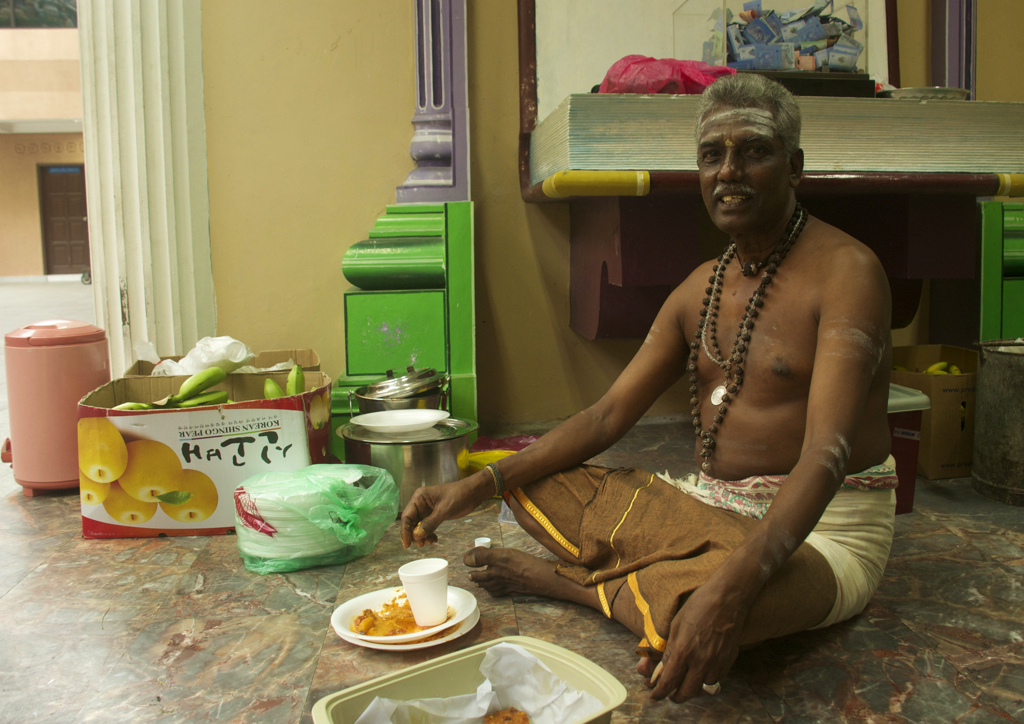 I joined him and he handed me a polystyrene lid with a few deep fried delicates inside. The food was fucking intense. I wasn’t sure what I’d just eaten, but they were spicy and almost unbearably delicious! I’d absolutely devoured. The priest must have interpreted this for hunger and offered me more. Thank the gods! A few other tourists had wondered in and looked jealously my way. 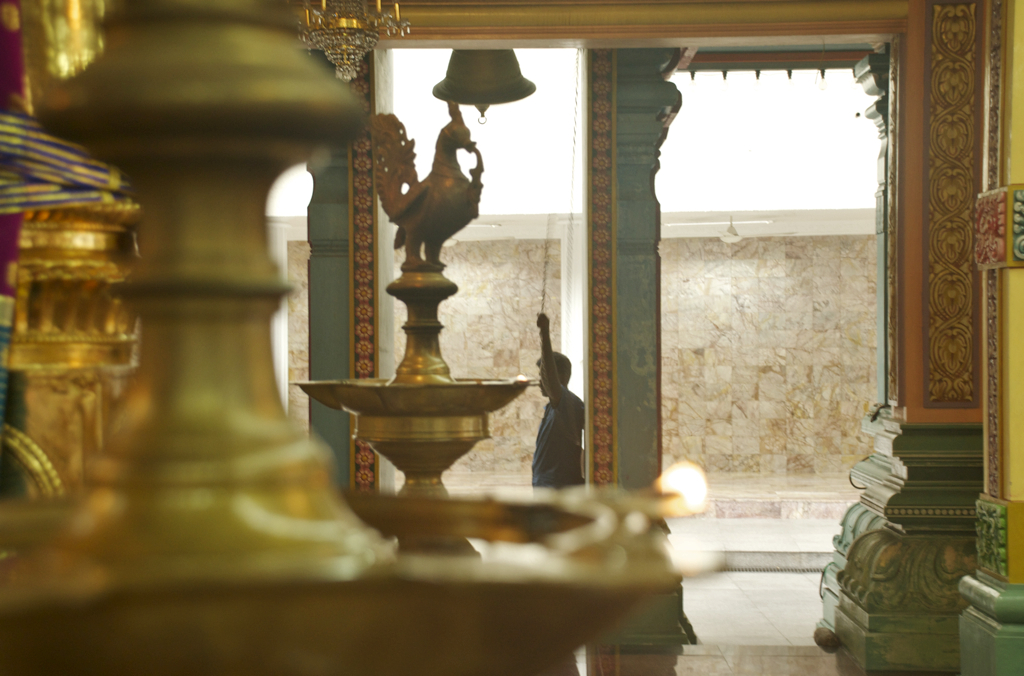 When I was done we sat in silence listening to the music and watching the faithful doing the rounds of the various effigies. Sitting there entranced by the music and the pounding tropical rain, my belly full and lips on fire, stirred by the generosity and quiet reverence, my usual impenetrable cynicism softened a little bit. For a brief moment I felt like life wasn’t meaningless, that there just might be a soul, and that all life on earth probably does share a mystical bond.

I felt incredibly lucky to be there and be alive. 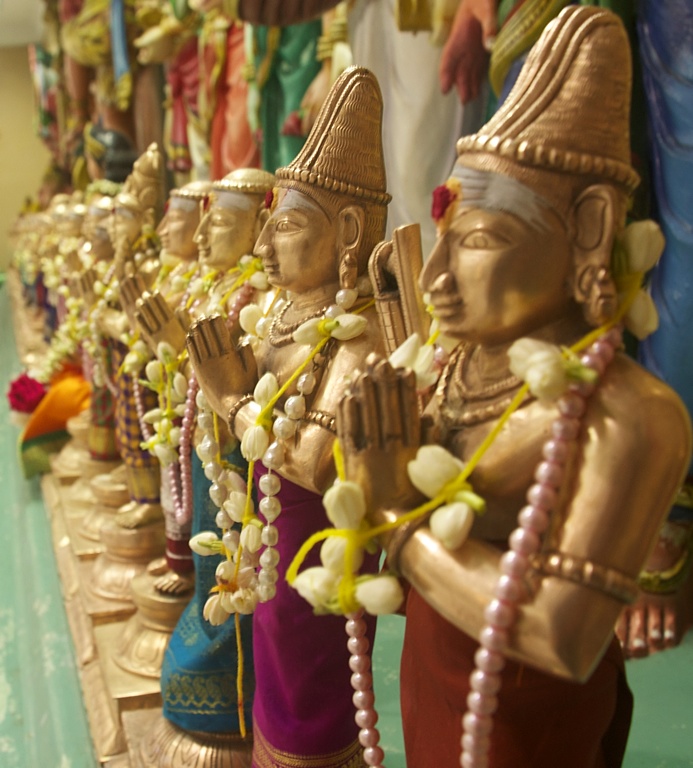 P.S: Don’t worry, I haven’t become a cliched spiritual hippy just yet. In fact, ten minutes after exiting the temple I bought some hair gel, some after shave, a tonne of pirated DVDs, and went back to thinking about blasting cash on a yet another new camera I don’t need.