Today our unelected, rule-by-birthright, tax-dodging Head of State read a few pieces of paper live on TV, written for her by our millionaire, fuck-the-poor Prime Minister and his millionaire chums.

It’s always nice to be read a “programme for working people” by a woman with a jewel encrusted hat from a golden chair in a house of lords surrounded by royal ugly dudes and their medals: Makes you proud to live in a classless democratic country, doesn’t it?

I don’t know about you, but it feels ever so slightly concerning to watch a room of millionaires, watch a family of millionaires watch all the pomp and ceremony that goes with a Queen’s Speech. Especially at a time when there’s so much talk from said millionaires of scrapping the Human Rights Act (HRA). Who needs international human rights when you’ve loads of money, eh?

Well, the good news is that the government seems to have backtracked slightly on their plans to outright scrap the HRA. Instead they promised to ‘bring forward proposals for a British Bill of Rights’ in the Queen’s Speech.

Bringing forward proposals is a completely different phrase to bring forward legislation. But the fight for our human rights is far from over. And while the Tories will try to convince us that we don’t really need those pesky rights anyway, we can all look forward to the right-wing media to supply us all with a steady stream of bullshit and half-truths when covering the HRA. 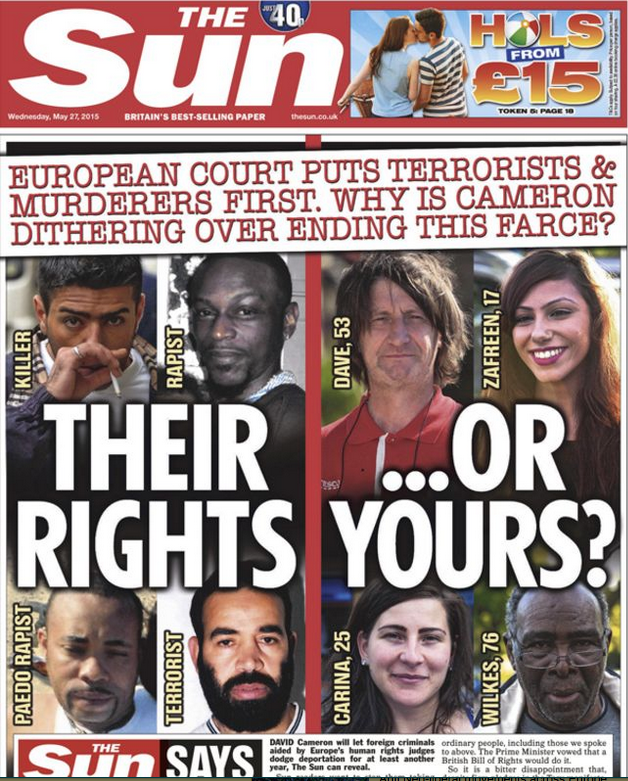 The Sun with some half-truths and an “Us” vs “Them” front page. Skanked from here

It fact it all started this morning before the posh woman in the sparkly hat had even read from the bits of paper. ‘The HRA,’ they protest, ‘is purely a Get Out Of Jail Free Card for rapists, pedos, criminals, “illegal” Africans (er… immigrants), and muslims (er… I mean terrorists).’

Such behaviour is moronic, for you see, they forget that the HRA also protects the freedom of expression and by extension the freedom of the press to tell whichever lies and half-truths they like best.

The HRA protects everyone because no matter where we were born; or the passports we hold; the money in our bank account; the colour of our skin; our genitalia and the orifices we like to put them in, or on; the things our bodies can and cannot do, and yes, even after the crimes we might commit, we are all human beings. And all humans have the same fundamental rights.

At the end of the day criminals and even terrorists are human too, and though the things they do are despicable and should be punished under the law, the state and its government should never lower itself to their standards.

Yes, the HRA probably has kept a few horrible terrorist bastards in the country, but so what? If they were convicted, then they more than likely went to jail where they paid their debt to society and perhaps even reformed their horrible bastard ways and became better people. But it is a fallacy to say that because the HRA sometimes protects bad people, that the whole thing is bad. Remember the HRA protects people like you too!

One of the government’s main arguments for scrapping the HRA is that the UK legal system is under the garlicky thumb of the EU, but that is complete and utter sweaty bollocks!

The UK’s legal system is not in the thrall of the European Convention on Human Rights (ECHR). If you actually read the HRA, it stipulates that the UK courts only have to ‘take into account’ any decisions made by the ECHR. Taking something ‘into consideration’ is hardly legally bonding, is it? 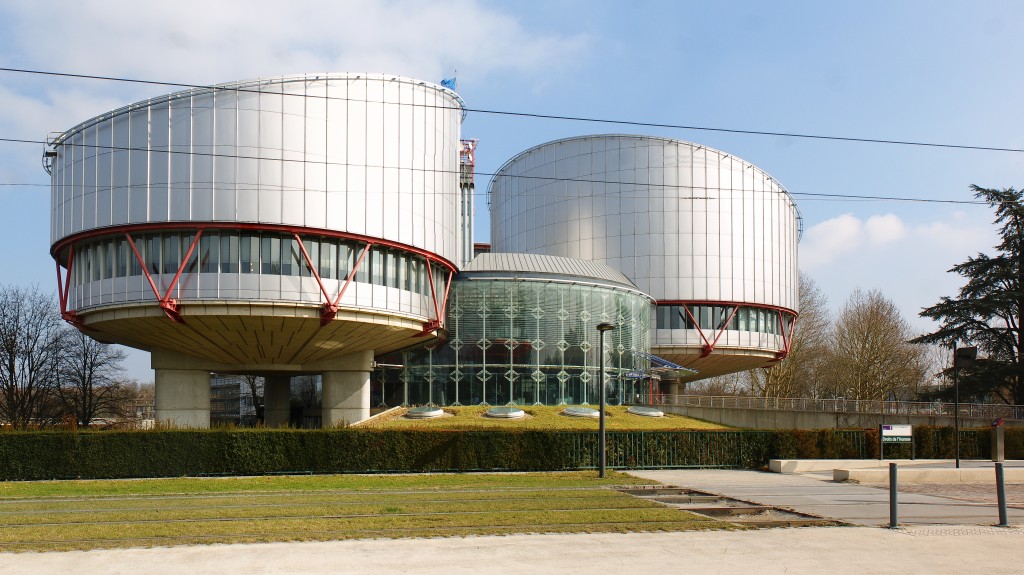 Oh the humanity! The European Court of Human Rights: Image skanked from here

In fact, the founding president of the Supreme Court of the United Kingdom, Nicholas Phillips* made the point himself, “There will, however, be rare occasions where the domestic court has concerns as to whether a decision of the Strasbourg court sufficiently appreciates or accommodates particular aspects of our domestic process. In such circumstances, it is open to the domestic court to decline to follow the Strasbourg decision, giving reasons for adopting this course.”

Just the other day Brian Leveson and a host of other UK judges said that they have never felt ‘crushed by the European jackboot’.

The conservatives surely must know all of this. They’re clever bastards, you know. They probably had a public school education where their teachers were less stressed out and actually gave a fuck what their students learnt, rather than worrying about league tables and Ofstead reports. They probably went to Oxbridge, for fuck sake!

This then is more troubling as it leads me to worry what the Tory’s true intentions are. As far as I can see, there are two possibilities here. Either the Conservatives bumbled into this shitstorm a la “The Thick of It” to win back to the voters attracted by Nigel Farage and his nutty band of racist brigands. If this is the case hopefully they plan to pull a Nick Clegg a la university tuition fees.

The other reason they may want to scrap the HRA is to limit further the opportunities and resources available to the poor, young, disabled and working class. Austerity plus no human rights equals a fucking bleak picture indeed, but not if your daddy was a lord, a duke, or an earl. Or you own a bank that helps people avoid tax.

And why do they want to replace the HRA with a British Bill of Rights and Responsibilities? Why are they calling it that? Is it only Britons that are worthy of Human Rights?

I was not born here, but my mother was and so I have citizenship. Will that make me an immigrant? Will the British Bill of Rights treat foreigners as human? What will happen to the rights of my father (an American)? As half yank-half limey humans, will my sister and I only get only half the rights?

What about the rights of people born in Britain to British parents but have taken on the citizenship of another country? They are technically British, but no longer citizens, so will the British Bill of Rights apply to them?

It should not be up to a political party to decide which freedoms apply and to whom, especially when only an approximate 24% of the population actually voted for them. This country should not follow in the footsteps of the governments of China, Belarus, Russia, Israel, North Korea, Saudi Arabia, Myanmar, or anywhere that flaunts human rights. Wouldn’t the people in those countries appreciate a Human Rights Act?

Won’t Britain, an open, wealthy, democratic country which was pivotal in setting up the Universal Declaration of Human Rights and the ECHR, set a dangerous precedent for other governments to ignore international law? How can this country bomb the fuck out of another country on Humanitarian Intervention grounds, when it no longer respects the rights of humans? 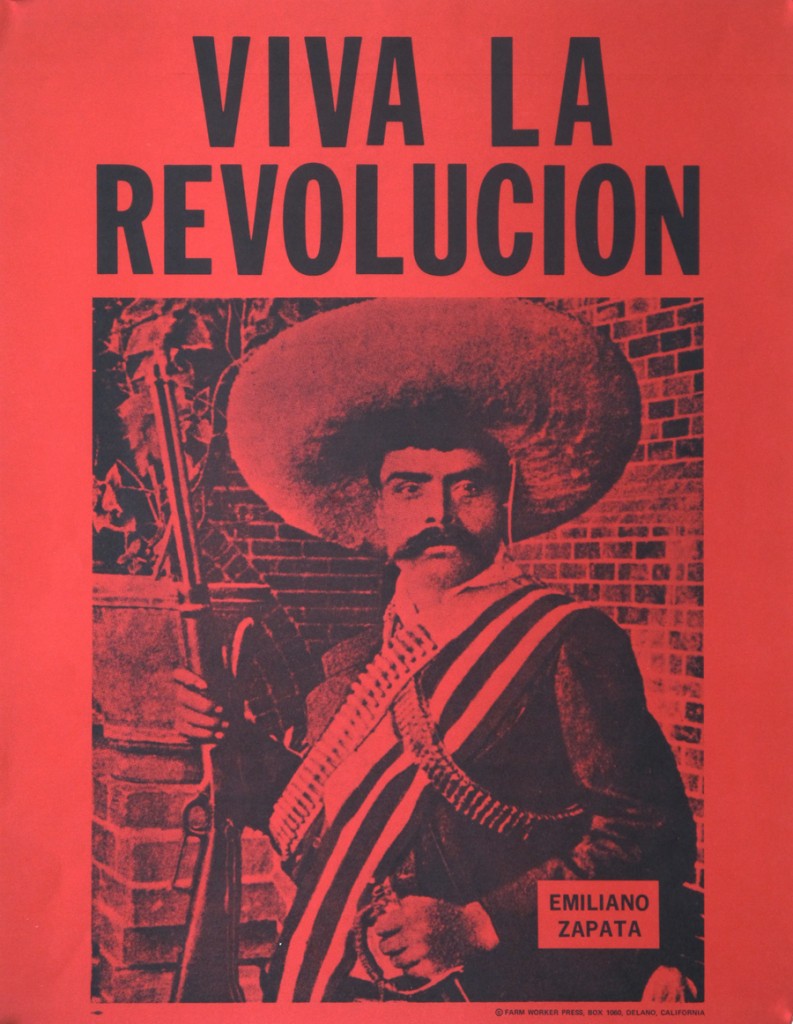 So what can we do about all of this, apart from a full blown bearded-socialist revolution? And that doesn’t look very likely, does it? We all like buying things too much for that. But this country still is kind of a democracy, isn’t it! So we should do something.

I think we all realised after the last election that sharing articles, liking witty graphics, retweeting and commenting on Facebook statuses changes nothing. The civil and human rights advocacy groups Liberty, and Amnesty International recommend we email our MPs  to urge them not to scrap the HRA. I sent mine a less snarky, less sweary version of this!

I’d recommend reading the HRA, the ECHR and the UDHR, which aren’t as complicated or boring as you might think. It fact they’re pretty straight forward. Then become a complete buzzkill and tell all your friends and family about their importance. I’d also recommend you to join / volunteer for / donate to a human rights organisation. By ourselves we can do fuck all, but together if we’re loud enough, if we’re insistent enough we can change anything. The point I’m trying to make here is at least to do something more than writing 140 angry characters.

Save our Human Rights Act!

*A quick disclaimer here: I am not suggesting nor implying that I in anyway shape or form know Nicholas Phillips’ position on this matter.

Before spring’s beautiful embrace makes way for the crushing humidity and biblical rains of summer, get yourself some wheels and venture forth to Gyeongsang…