The United Kingdom is so full of radical “muslamics”, scrounging economic migrants posing as refugees, and weird ex-soviet gypsies that there is literally no green or pleasant land left to stand on.

So desperate are the vast swathes of asylum seekers over in Calais for the £35.39p a week the government bestows upon them that the native born Brits are being shoved off of England’s clouded hills and pushed out into the freezing, polluted seas…

Clearly a literal interpretation of this argument is absurd.

Of the 64 million people living in the UK, only 8.3 million, or 13.1 per cent of the entire population were born overseas according to the latest estimates from the Migrant Observatory at the University of Oxford. That means 43 in every 50 people living in Ol’ Blighty were actually born here.

So in a very real sense, Britain isn’t full of anyone expect Britons.

Nevertheless, some would have you believe that we can’t accept any more refugees because the country’s economy and services are at breaking point. They say asylum seekers are scroungers living off of your coin, yet at the same time they‘re somehow taking all of ‘our’ jobs. Others dilute the vast complexities of the European Union into a squabble over Britain’s borders.

In these times of relentless austerity and the contradictory fear mongering amongst the establishment’s Brexits and Bremains, the “Britain is full” argument could almost sound credible. Look closer however and you’ll find anyone who actually raises this point is either egregiously misinformed, hoping to divert our attention from other dastardly deeds, or just in need of a dictionary.

Take a look at Westminster. Take a good hard look at the people responsible for running the show. They don’t much look like refugees or economic migrants, do they. In fact, of the 650 MPs in Westminster 590 of them are white British men.

Take a look at the Conservative MPs – 48% of whom were privately educated compared to just 7% of the overall population. They are the ones responsible for slashing the funds to our essential public services like the NHS, mental health treatment, pensions and benefits to poor families, the disabled, the unemployed, etc, etc.

At the same time as gutting the social support to those most in need, they have allowed billions of pounds to be siphoned out of the economy and into the Swiss bank accounts of fewer and fewer people by cutting the taxes of large corporations and flogging off public assets to dubious companies like G4S on the cheap. “Britain must live within its means”, they say, yet hundreds of billions of pounds is coughed up to fund catastrophic military misadventures in oil rich countries and on replacing Trident, a vanity project which Reuters estimates is likely to cost in excess of £160 billion.

Austerity is a political choice, and an especially dubious one when the money to help those most in need is so clearly available. And yet the government, UKIP, most of the press, Facebook fascists like Britain First, and the pseudo-intellectuals at Migrant Watch UK choose to ignore this. Instead of directing their anger at those with the power to fund our services properly, they point the blame at foreigners and maintain that “Britain is full.” 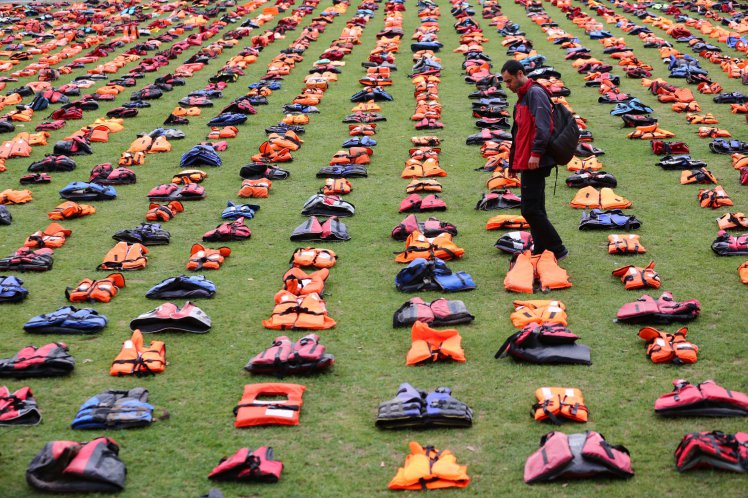 Parliament Square transformed into a ‘graveyard of lifejackets’ using 2,500 lifejackets worn by refugees crossing from Turkey to the Greek island of Chios surround Churchill’s statue at Parliament Square, London. The event is in support of refugees and coincides with the UN Migration Summit.

A major problem is that Britons of all political persuasions tend to “greatly overestimate the number of immigrants in the country”, according to a 2015 survey by IPSOS MORI. And with the way the media tends to cover migrants, it isn’t hard to see why.

All manner of neoliberal horrors are being perpetrated by the current government, however, instead of investigating the root causes of inequality the press would much rather focus on a non-existent Romanian invasion, portray British muslims as ISIS loving fundamentalists, boil down human lives to nothing more than an economic cost on the taxpayer, or dehumanise refugees.

After the Sun published a hideously bitter Katie Hopkins editorial last year in which she referred to refugees as cockroaches, the UN High Commissioner for Human Rights, Zeid Ra’ad Al Hussein urged the UK government to closely examine the incident in terms of hate speech. They didn’t, of course. And neither did the Independent Press Standards Organisation do much about it, despite receiving hundreds of complaints.

However, Murdoch’s rag was far from the only paper to raise the High Commissioner’s concerns. He added, “Asylum seekers and migrants have, day after day, for years on end, been linked to rape, murder, diseases such as HIV and TB, theft, and almost every conceivable crime and misdemeanour imaginable in front-page articles and two-page spreads, in cartoons, editorials, even on the sports pages of almost all the UK’s national tabloid newspapers.”

Perhaps we expect too much of the corporate media. At the end of the day, their raison detre is to make money. In their bid to make more profits from advertising, truth and accuracy are set aside in favour of a wild, profit-driven race to the bottom where ever more ludicrous and outrageous stories are printed in order to ply on their readers’ irrational fears and latent prejudices. Like a heroin dealer or the arms trade, the media barons care little for the effects their products have on humanity and the political hyperreality they create.

Studies have shown that UK’s foreign born population are less likely to be receiving out of work benefits, partly because they are not always entitled to them in the first place. While it has been shown that migrants are slightly more likely to claim tax credits, a 2014 study by the UCL’s Centre for Research and Analysis of Migration concludes that the UK’s recent foreign born population “have contributed far more in taxes than they have received in benefits.”

Assuming that all foreigners who enter the country are unworthy of shelter, health care, education, child support, or the opportunity to work is a denial of their humanity. Why is it that we who happen to have been pushed from our mothers on this particular bit of land are privileged to more rights and benefits than those who emerged on some other piece of land? Why should those who happened to have moved across arbitrarily drawn, imaginary lines on a map and ended up in the Calais jungle have their shanty houses raised and their human rights denied?

There is plenty of room over here to settle the approximately 5000 desperate souls hanging out in Calais permanently or at least temporarily. It is not the finances our government lacks, but the political will and basic human compassion.

Britain is not full!

A note from the editor-in-chimp: I wrote this one originally for the Morning Star. Give ’em a read, eh!

With so little time to do anything productive this month, you’d think I’d find something better to do with myself. I could have studied…