Earlier in our four-day blast around Beijing, we’d been shown the exact same images by other so-called art students, who claimed to have painted them with their own sweat, blood and tears. This aggressive little lady was now flaunting this crap as her own. Being rather too British about the whole thing, we kept up the charade while we drank the tea she’d given us and slowly crept towards the door.

This was the final straw. We finally realised that we weren’t the best looking foreigners to have ever graced Beijing and that the majority of these student ladies were out to relieve us of our cash.

A four-day Christmas blast in Beijing

It all happened way back during our first year living in the friendly portion of Korea. Ste and I had managed to claw three days off from our respective Seoul-crushing English academies back in the capital. Being comparatively near to, and not knowing if we’d ever get the chance again, we figured we had to check out China and its Great Wall.

We knew exactly what we wanted to see and couldn’t be arsed reading too much into the Celestial City. We hastily booked the cheapest flights we could find, had the imposing Chinese tourist visa take up a whole page in our British passports, boarded a bumpy flight and touched down in the communist showpiece that is Beijing.

We tobogganed up and back down the Great Wall, traipsed through the Forbidden City, strutted over Tiananmen Square, chilled out in the Summer Palace and took in as much of China as could be had in four days. It was a great little excursion, even if it was colder than a yeti’s naughty bits.

So having probably bored you to tears regaling my holiday, you might be asking yourself the same impatient rhetorical question my Granddad is so found of asking when confronted with a load of irrelevant babblings: “What’s that got to do with the price of tea in China?”

Well Granddad, I can tell you this. It’s fucking expensive! 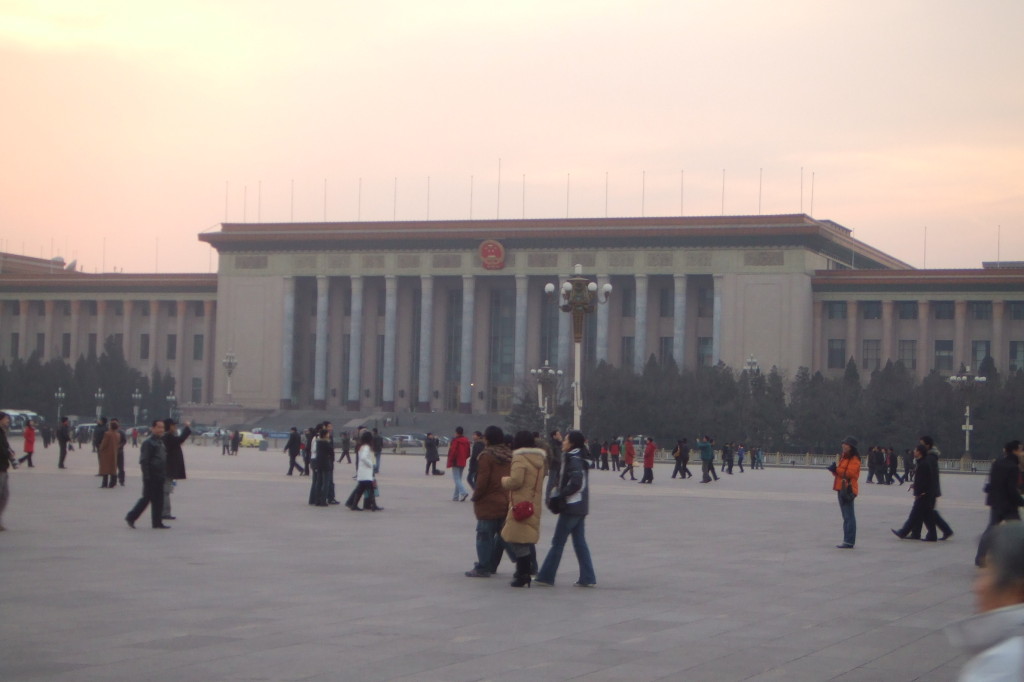 Tienamen Square: If someone offers to show you a traditional China tearoom, don’t go

Should have read the guide books

Having just had our minds blown by the Forbidden City we needed a few minutes to return ourselves to 21st century China. We paused by the front gate where Mao Zedong’s dour portrait presides and took in the splendour that is Tiananmen Square. We went Kodak crazy snapping pictures of the-place-where-nothing-happened-in-1989.

Returning from the stench of the cubical-less toilets, we whipped out our tourist paraphilia and tried to decide where to head next. As we tried to make sense of our Engrish maps, hundreds of tourists continued to spew forth from the forbidden gates in front of us, while others bartered over assorted tourist crap behind. Standing around, looking lost and not sure what to do with ourselves, we must have looked ripe for the picking. 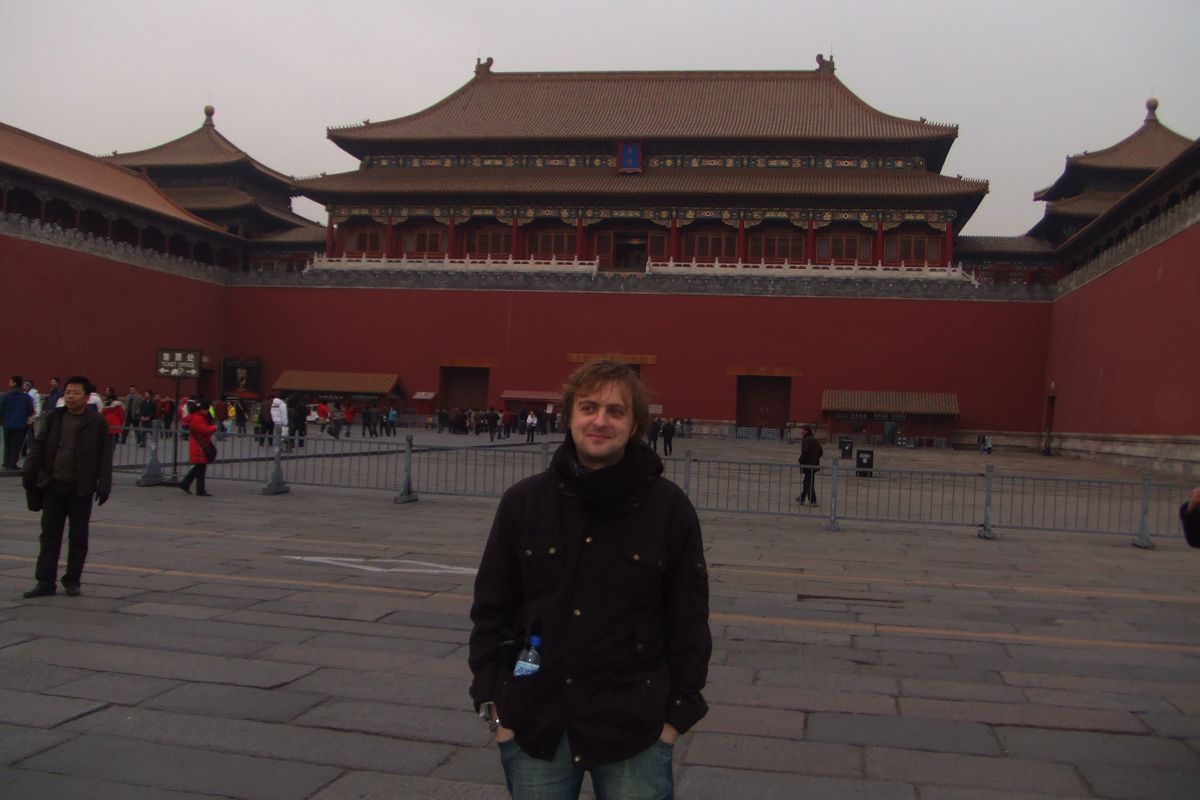 In the process of having my mind blown

A pair of Chinese girls huddled up against the cold approached with big smiles and an outstretched camera. After taking each other’s photos we got down to shooting the breeze.

Our time in Korea had taught us to break free from the shackles of our British reserve and to embrace the random approaches of strangers. Maybe we had also gotten much to used to the Land of the Morning Calm’s ridiculously low crime rate and its citizen’s good intensions. 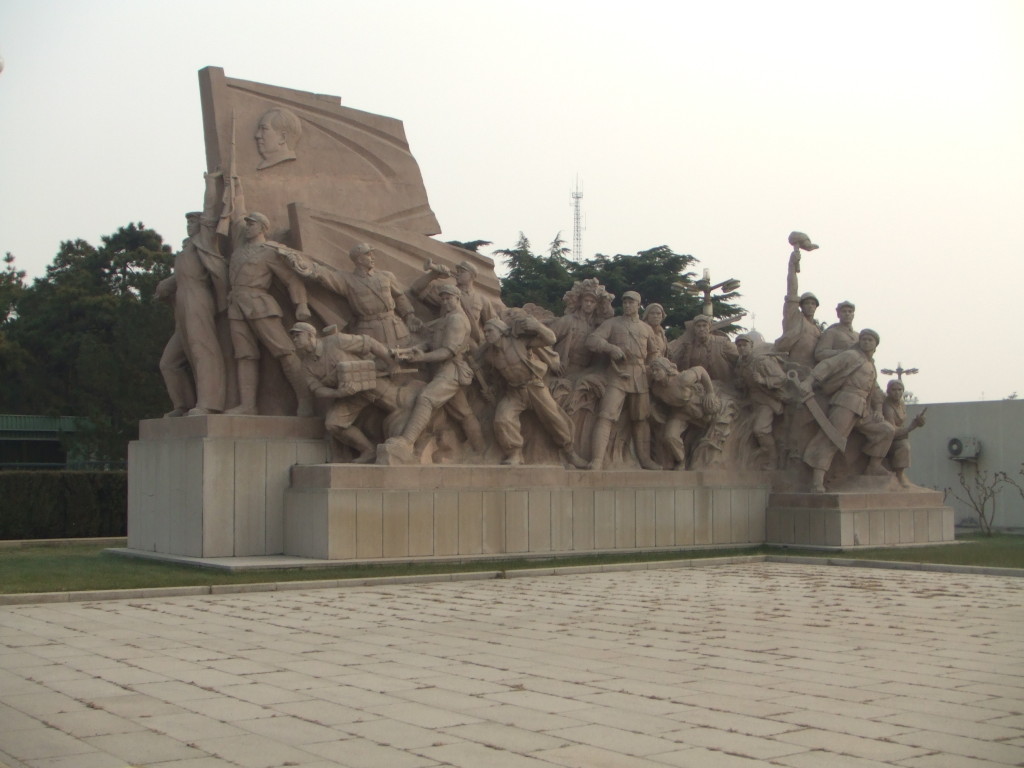 We agreed to accompany the girls once the pretty one had said, “There’s an old part of town over there,” pointing over Tiananmen square, “which they’re going to knockdown for the Olympics. Do you want to come with us?”

The girls filled us in with their back-stories as we quickly marched across the square and past the Chairman Maousoleum (ahem, sorry). They were students (of course), from some bumble-fuck-nowhere town in the middle of China, enjoying their winter vacation in the capital. If we’d bothered to actually read any of the fine guidebooks dedicated to Beijing then perhaps we would have noticed the impending scam, instead we were delighted to have stuck up a friendship with these two communist girls.

Make us a nice cup of tea, would ya?

There was nothing old or seemingly condemned about our destination. To be honest it was a pretty unremarkable street and looked the same as any other in town. The only differences were the gates at either end of the street and the fact that it was pedestrianized.

We stopped by an oriental herbalist crammed full of traditional Chinese medicines that reeked the bitter sting of ginseng. I was paired off with the pretty one in here and the excitement must have gotten to me, for I decided to shell out a disgraceful amount of dosh on a useless remedy for male pattern baldness. Wasting money is something at which I excel.

The not-so-pretty girl pointed to a tearoom and asked if we’d like to take part in a Chinese tea ceremony. Hailing from a tea swilling culture ourselves, we were more than eager to try. Upon entry of the teahouse, the girls and the owners jabbered on in Chinese as me and Ste followed on moronically.

The four of us were seated around a table in a large room. Red and yellow was splashed about all over the room and featured plenty of Chinese trappings, like some of those hideous paintings mentioned above, various assortments of Chinese deities, of course a portrait of The Chairman was present, and other Chinese what-have-yous. Peaceful Chinese music squeezed in through a speaker somewhere in the background. The place had the whole oriental theme nailed. Perfect for that unsuspecting tourist seeking a little piece of China, i.e. us two muppets.

The girls handed us the menu, which was of little use seeing as it was exclusively in Chinese. Knowing us, we probably picked whichever set sounded the most exotic. We failed to notice the ominous lack of any prices.

Moments later, in waltzed our young female host, decked out in the kind of bright body-hugging dress the West often associates with China. She carried a tray filled with a confusion of tea drinking implements. She placed them elegantly atop the table and made ready the ceremony.

You got any normal tea?

I hadn’t really thought about the implications of the word ‘ceremony’. In my ignorance I assumed we were just going to lounge around and swill some awesome teas. Well, we all know what happens to those who assume! We covered our eyes with tea cups, rolled them up and down our forearms, sniffed tea leaves, exchanged liquids from pot to pot, stirred the brew in a regimented way and prayed to… well, who knows what (Russell’s tea pot?). We did much more arsing around than actually drinking anything, which was actually pretty nice.

In hindsight I wonder if all of this was just an elaborate piss-take to see what you can get the stupid white devils to do! Whatever, I fully enjoyed the ridiculousness of the whole thing, so the joke’s on them really.

While this was all going on, our newfound ‘friends’ tried hard to translate the beautiful sounds that sprayed forth from the mouth of our host. They soon stopped trying however, as their English skills weren’t quite up to scratch. What she was saying was probably outrageously dull anyways, plus I didn’t want her voiced interrupted by the dour sound of English. Mesmerised as I was by the undulating rhythms of Chinese, I could have listened to her voice all day. Most people say French is sexy, but this was pure ear-porn for me. Little did Ste and I know that that same sense of shame that comes from wasting an hour poring over deprived videos on the Internet, was soon to come. 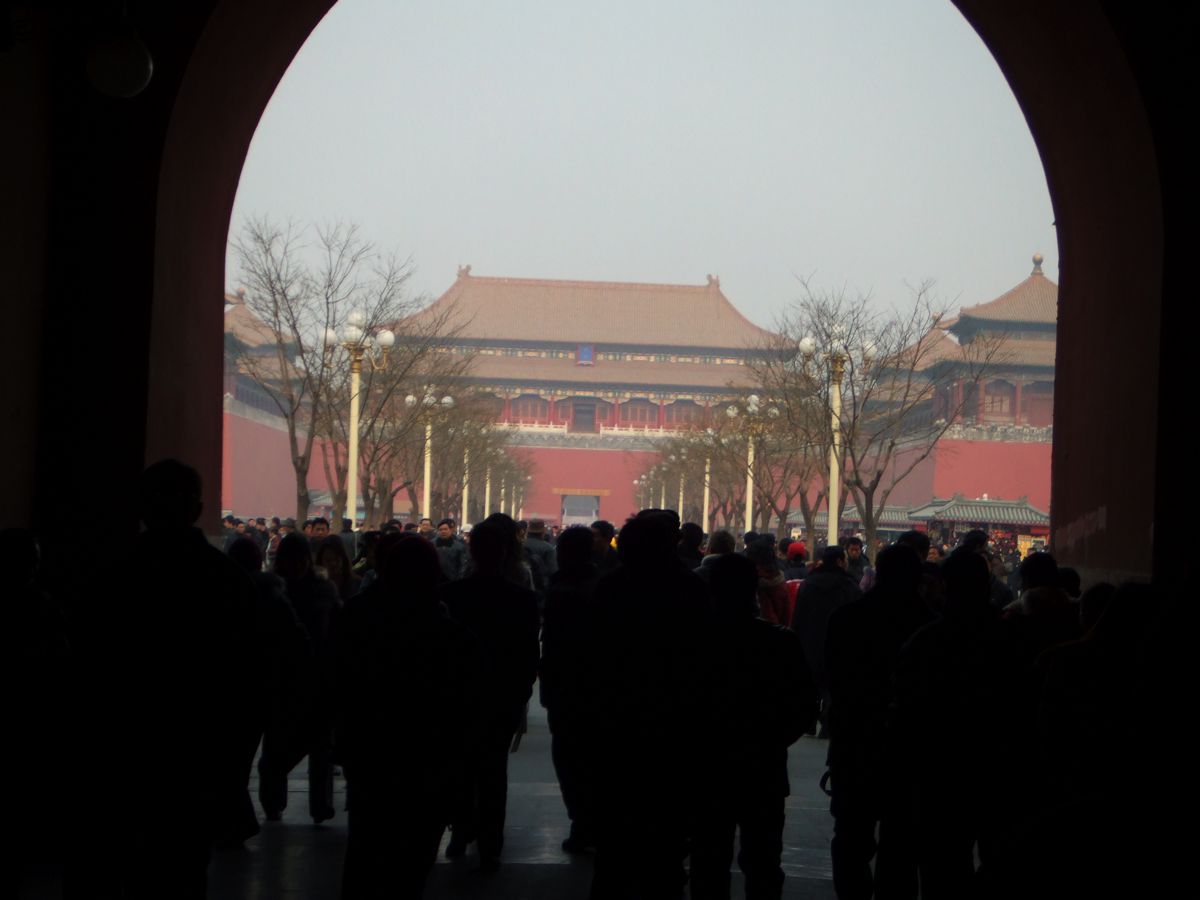 When the ceremony was complete, our host wandered off leaving us to momentarily bask in experience of it all. How many people did I know back home who had done this?

Upon her return the host gave the bill to one of the girls, transforming their faces from that of joy to a grimace (I’ve never been sure if the girls were acting or just feigning shock at the bill.) I had half expected it to be expensive after all the rigmaroles of the ceremony, but only in the ‘expensive for China’ sense and certainly not for this son of capitalism and empire.

Being intensely crap at maths, I didn’t entirely understand exactly how much we were expected to pay. Ste seized the bill from my incomprehension and went on to exclaim an array of expletives. The bill was well in excess of $250 American. Shit!

I opened my wallet and fiddled through the masses of red, green and blue notes that were hiding out in there. My habit of wildly over estimating how much money I need when traveling about insured I had more than enough to pay my share. This was going to seriously damage my funds for the rest of the trip and we hadn’t been to the bloody Great Wall yet.

Lucky Ste had had the brilliant idea to only take out a small amount of money with him. He pulled out about $60 admitting that this measly amount of cash was all he had.

With all the cunning of an inbreed donkey, I lowered my wallet under the table, craftily glancing out the corners of my eyes while I drew on all the acting skills I could muster. I whipped out what I guesstimated to be around $100 and proclaimed that this was all I had too. Unbelievably the girls bought my shitty acting and pulled out a credit card. We gave the girls our cash while the card transaction was going on. With our wallets considerably lighter, we left with the girls and parted ways. 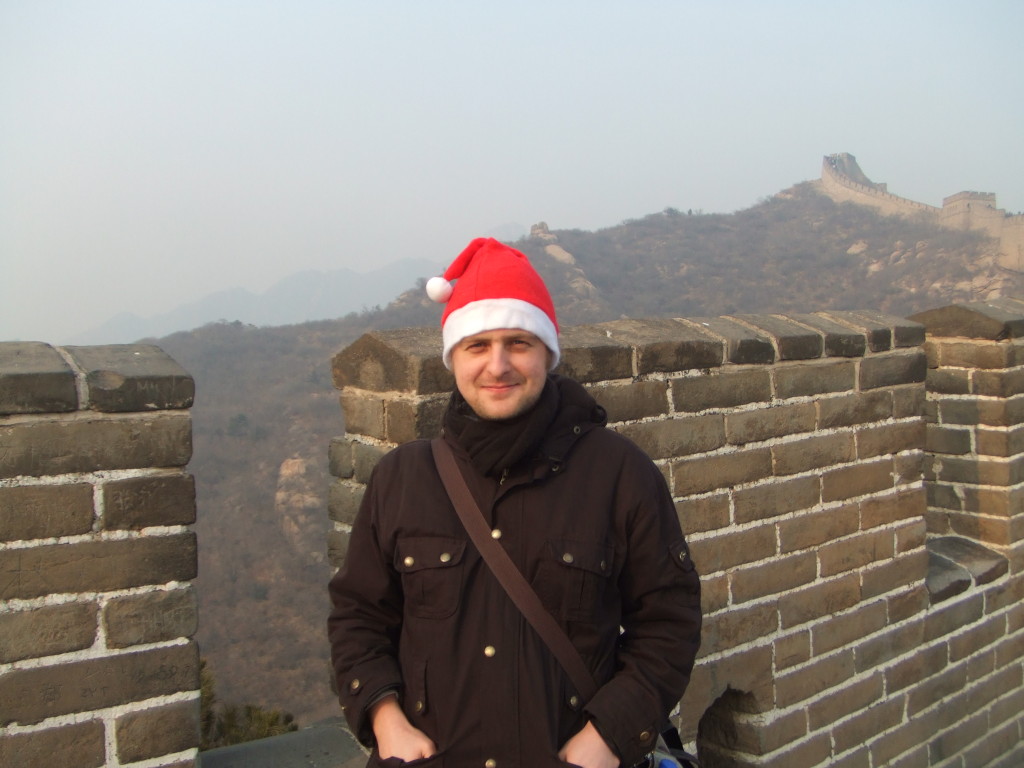 A moron on the Great Wall

So there it is. My stupid and long-winded answer to a rhetorical question no one asked. However our tale of the tearoom scam differs slightly with the many others out there. Most stories involve tourists having teeth removed by burly looking and completely unlicensed dentists, or getting a good feel for the thickness of a Chinese telephone book in a police station. I’ve never been entirely sure of the girls’ role in this. Were they in on the scam or as much a victim as we were? Was that credit card really theirs or the tearoom’s? What if we didn’t have enough cash? Whatever, I don’t care. The experience didn’t leave me embittered with China or Beijing in the slightest.

For the remaining few days we had left in the Celestial City, several student girls asked if we’d like to check out tearooms or go to their art galleries, but the penny had finally dropped. We’d made every schoolboy error there is in Beijing. We politely informed the girls just where they could stick their fucking art and/or tearooms.

This was originally published here on Asia Pundits.

Today our unelected, rule-by-birthright, tax-dodging Head of State read a few pieces of paper live on TV, written for her by our millionaire, fuck-the-poor…