Nine years ago my sister, Jasmine De’Ath, took off to Malaysia and undertook voluntary work in an elephant sanctuary. By working in this rural community, Jasmine experienced a side of Malaysian life most visitors rarely see.

In this article – the first of a two part series – Jasmine speaks about her village life in Malaysia.

First off, could you give us some background information about the trip?

Yeah, I went to Malaysia after sixth form in 2003. It was all organised by Gap Challenge; they send out volunteers to projects all over the world. I was partnered up with another girl, Steph.

How did you feel when you first arrived at your village?

“Well, before we went there, we had a week in the jungle, on a bloody survival course. It was horrendous. So when I arrived at the village, I was excited and relieved to be back in civilization.

The village was called Kuala Gandah, which means elephant village. It was kind of in the jungle and pretty small. I think there were around 15 houses in all.

It was about two hours south from Kuala Lumpur. It was very rural but quite affluent really. They had a few tourists coming in every day to visit the elephant sanctuary, which everyone in the village worked for.

How were the people towards you?

They’d not met many westerners before, so were really interested in us. They were dead friendly and really open.

They enjoyed having us around. Everyone really wanted us to eat their food and invited us to their houses and weddings, all the time.

It was such a small place, everybody knew everybody. So we became a part of the community.

At first, the kids would run away as soon as they saw us. There was this little 2-year-old boy; I can’t remember his name. He used to hide behind his mum whenever he saw us, but got used to us eventually. He was really cute.”

Jazz with a gaggle of local kids

Did you live with a family?

No, we had our own place. It was nice, though dead basic. I remember it didn’t have any chairs; everyone always sat on the floor. The toilets were, you know… just holes in the floor. We got used to it, though.

Was there anyone in particular that looked after you?

Yeah, there was woman in town that looked after us; her name was Kat Beda. She lived a few houses down from us. She was married and had four kids, but would always cook us breakfast and dinner everyday. She was a great cook; the food was amazing.

She made Nasi Goreng a lot, which is fried rice with seafood and nuts. It was gorgeous. We also ate Rotti Channi, an Indian dish, almost every morning.

Her house was like a café. Some people in the village and the occasional visitor to the Elephant Sanctuary would eat there, too.

It was surprisingly easy. Although, I did cheat a few times and drank water during the day.

I wanted to see what it was like, to see if I could do it… I also wanted to lose weight.

We’d wake up before sunrise and head over to Kat Beda’s, where we’d fill up on food. After work we’d lounge around at home waiting for sunset, then go back to Kat Beda’s house for dinner.

At the end of Ramadan, the village was partying all the time. It was constant eating for like two weeks. The whole village would get together in their best clothes, and the food was non-stop.

Did any cultural clashes arise?

Not really. They only asked us to wear headscarves at weddings.

We had to accept things with our right hands and it was rude to point with your fingers. Also, we could never refuse to eat someone’s food or decline an invitation, hence all the weddings.

One funny thing I remember, everyone was obsessed with our weight. It wasn’t rude for someone to say, “You’re fat,” right to your face. They also thought we looked really old. Some guy said I looked 40; I was only 18 at the time! 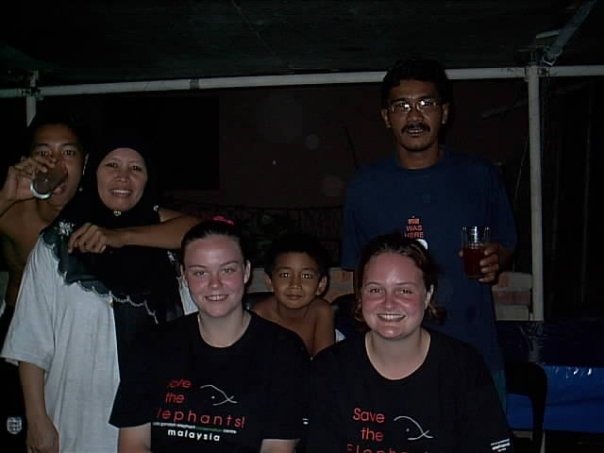 Steph and Jazz with Kat Beda and Family

How did you feel when you left? Had the experience changed you in anyway?

I felt sad to be leaving so many people behind that I’d made such good friends with. During the three months we spent there, I’d become really comfortable living there and made friends with everyone in the village.

But I was also excited to be heading to the next project.

I suppose I became more independent. Living there, I couldn’t run home to mum or anything so had to deal with my own problems.

Thanks Jazz. Speak to you soon.

Editor-in-Chimp’s note: This article was originally published here on Travel Wire Asia. Check it out there and show some social network love.