Here is the second article with my sister, Jasmine De’Ath, about her time volunteering in Malaysia. In this article, we take a look at her experience at Kuala Gandah Elephant Sanctuary. Click here for part one

Could you describe what a typical day was like?

We were woken by the mosque’s call to prayer every morning, around 7am. We went down to the elephant compound and moved them to the visitor area. We’d then feed and hose the elephants down. When that was done, we’d eat breakfast back at Kat Beda’s house and wait for any visitors.

The visitors were groups of school kids, families and tourists; we were busy most days. We’d lead the visitors on rides, bathing, feeding and swimming with the elephants. We put the elephants back in the compound and headed home around 4 or 5pm.

How did you find working with the elephants at first?

It was scary. I had no idea how to handle them. I worried that they’d hurt me or charge at us. I was too hesitant and you couldn’t be; they kind of tested us.

However, we bonded with them quickly and they all became quite affectionate towards us. They’d open their mouths so I could pat their tongue and let me climb up their trunk to ride on their back. I remember blowing down Gua’s trunk. He really liked that.

Could you tell us about the elephants

There was Gua, Jaipur, Mentopyan, Abbot, Met Bunga and another female whose name I can’t remember.

The elephants at play

Gua was a baby boy and really, cute. Jaipur was another young male as well. The rest were all female and quite matriarchal. Abbot was in the middle. Mentopyan and Met Bunga were the oldest and stayed in the jungle.

Met Bunga, which means beautiful flower, had apparently killed a few men. She was really old and scary. I never handled her. In fact most of the handlers were frightened of her, too.

Gua was probably my favourite. He was so little.

Where did the elephants come from?

Malaysia, Thailand, one was even from Burma I think. They were rescued from everywhere.

Gua was found without his mother or anyone, wondering around a village.

Because it was a sanctuary, they’d get calls from people saying, “There’s an elephant near our village. Can you take it back to the jungle?” We actually went on an elephant rescue mission once.

Tell us about that.

It was brilliant. I really enjoyed it.

It was down in Southern Malaysia. Some wild elephants had wandered in a populated area and people were getting scared.

It took us about two weeks to track one of the elephants. I remember hiding behind a tree, when we found him. It was quite scary, but we were safe. We hung well back from the handlers, who were up front.

Once they found him, they knocked him out with a tranquilizer dart. I can’t remember how, but we managed to lift him up and onto a slow boat further into the jungle. When he came too, we released him into the wild, far away from any villages. 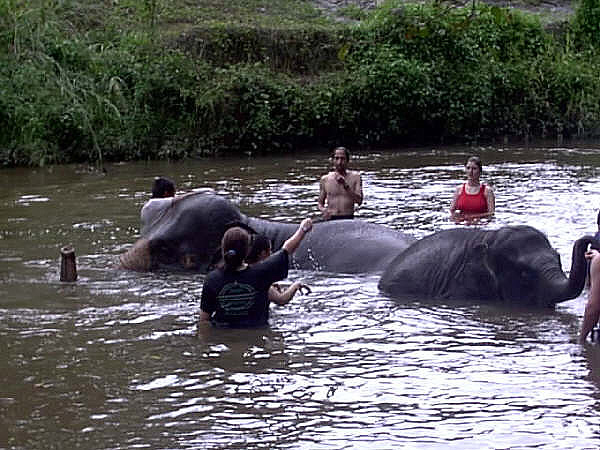 Visitors taking a bath with the elephants

Where you ever in any danger?

I was squashed between Gua and Mentopyan once. We were moving the elephants from one enclosure to another, when Gua moved to the side and I walked in between them. They unintentionally squeezed me for a second. They realised I was there, though, and moved straight away.

There was another time with Met Bunga, I remember. Me and Steph went to feed her in the jungle once. We’d given her the food and on our way back, the men frantically started to shout, “Move.” We could hear Met Bunga jogging up behind us, but couldn’t see her. It was really frightening.

They were all really nice to me and Steph. I can remember all their faces, but not their names unfortunately.

There was Bob Dengigi, which meant bad teeth. He could handle the elephants really well. He was little but tough and was always laughing.

Haj, another elephant handler, was the only guy who could speak English and a practical joker.

Rizali, worked at the elephant sanctuary as well. He lived in Kuala Lumpur and loved the village and the elephants.  He was responsible for looking after us.

Would you recommend others to visit/volunteer at the sanctuary?

Yeah, definitely go and visit. It’s great to get so close to the elephants.

The volunteering experience was very unique. I’d say if you’re ready to face the challenge of working with wild animals, then you should defiantly give it a go.

A note from the Editor-in-Chimp: This article was originally published here on Travel Wire Asia. Check it out there and show some social network love.