A note from the Editor-in-Chimp: This article was originally posted here, on Travel Wire Asia. Go check it out there too!

The enormous island of Borneo adds yet more to the Asian melting pot that is Malaysia. Malaysian Borneo (sometimes called Eastern Malaysia) is comprised of the states of Sarawak and Sabah, which cling to the Northwest side of the world’s third largest island. 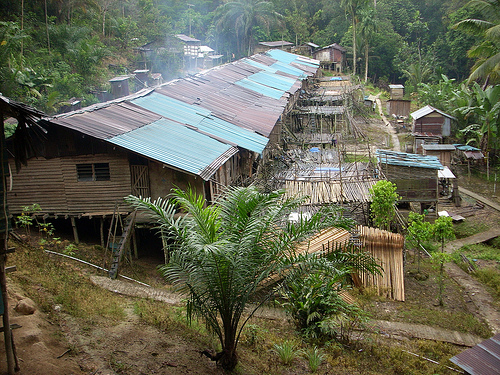 The Dayak, a collective name for the hundreds of tribes that populate Borneo, make up the largest ethic group on the island. Growing in popularity with the ever-increasing tourists to Malaysia is a visit to the village longhouses that these people traditionally live in.

As the very name implies, longhouses are elongated buildings raised several feet above ground by numerous sturdy stilts. The houses are typically made from tree bark and grass, but today many tribes also use the more versatile, but less pretty, sheet iron. The exact layout to each longhouse varies from tribe to sub-tribe to region, yet they all share similar characteristics.

The longhouses of Borneo generally consist of a lengthy communal hall with private family rooms splintering off to the sides. The entire village, in some cases up to 500 people from three generations, are housed in each.

The stilts upon which each longhouse rests serves to protect against flash floods and rodents. Their height also helps to catch the cool breezes blowing up high. The entire village, plus any visitors, commune in the longhouse while their livestock occupies beneath.

The Iban are perhaps the most well known tribal peoples of Sarawak.

In days long gone the Iban were once feared by all, due to their practice of headhunting. In order for a boy to be considered a man, he would have to strike out into the world alone, only being allowed to return to his village once he had attained the heads of his enemies. Scary right! Well, thankfully (or not, depending on your stance towards globalisation) this practice is no longer carried out. The attainment of manhood is now achieved by returning to the village with more useful commodities; like generators, air conditioning or T.Vs. 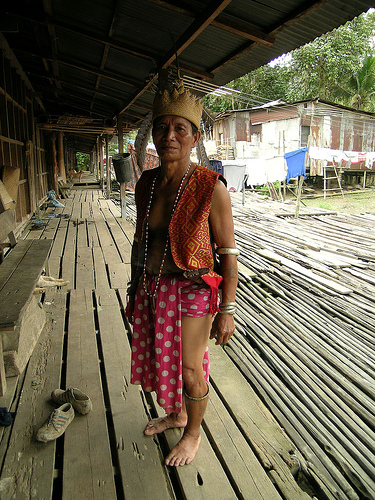 Someone you’re likely to meet

But by no means are the Iban the only people to live in this communal way. In the Northern state of Sabah, the Rungus also live in communal longhouses and adhere to many of their ancient customs. Their longhouses tend to be much closer to the ground and are just as willing to accept visitors.

Whenever one reads about the Iban or Rungus peoples, their friendly attitude towards strangers is always mentioned.

Do a quick Google search of Borneo longhouses along with the words ‘tour’ or ‘stay’ and you’ll find pages of tour operators offering up a night in one. Of course if you find yourself already in Malaysia, it’s just as possible to organise a trip in country with a local guide, too.

In and around the Kelabit Highlands – a large plateau in Sarawak close to the Indonesian border – it is possible to trek from one village to another. The longhouses there operate as rest stops as well as villages.

For the independent traveller wanting to reach the villages on their own steam, it’s possible to trek, bus, boat or fly to many.

Before entering a longhouse one must be invited. One advantage to having a local guide means they’ll probably do all that in advance. However, should you find yourself approaching a longhouse without one and the desire to enter, get talking to a local and you’ll invitation is likely to follow.

It is customary to provide gifts of food, drink, alcohol, etc. for the villagers of any longhouse. You will most likely be officially greeted by the village leader and expected to drink with him and the elders. Obviously stay within the communal area and only go into one of the private rooms if invited to do so.

A period of transition

Globalisation is changing the traditional way of life for the Dayak of Borneo. Many young Iban and Rungus people are upping the sticks of their longhouses and seeking a life in the urban areas of Malaysia. The 21st century has been coined as a transitional period for these people. Whether this means the traditional longhouse way of life will eventually become obsolete or not, remains to be seen. However, should you find yourself touring Malaysian Borneo, a stay in a longhouse is something not to be missed.

This article has barely scratched the surface on the number of tribes offering traditional longhouse stays in Malaysian Borneo. If you’d like to find out more then a visit to the Malaysian, Sarawak and Sabah tourist boards should set you straight.

Ben has been living, teaching, traveling, writing and photographing in East Asia for the past six years. Yet he wishes to see more of Earth’s most awesome continent. If you really search, his traveling scribbles and photos can be viewed on this here Internet thingy… Though it might be easier to visit his blog: monkeyboygoes.com.

Freddie Mercury never made it to Busan. Though I’m sure if he did (ignoring the impossibilities of time travel and necromancy), he’d want to…