With the city’s innumerable temples, overeager moto drivers, unofficial tour guides, flocks of one-dollar kids, and absurd humidity, 48 hours in Siem Reap can be a rather beguiling experience for the unprepared. This weekend warrior’s guide will set you straight.

Roughly 900 years ago as the Khmer god-kings were busy subjugating Southeast Asia into their ever expanding Hindu-Buddhist empire, the architects back in the capital were busy putting the finishing touches to the city’s centerpiece, Angkor Wat. Today the second largest temple complex in the world is largely intact, a mightily impressive feat considering Cambodia’s difficult past. Inside you’ll find plenty of tourists milling around the stone facades, hindu-buddhists murals, monks, seven headed serpent balustrades, and posing for an endless array of kodak moments. 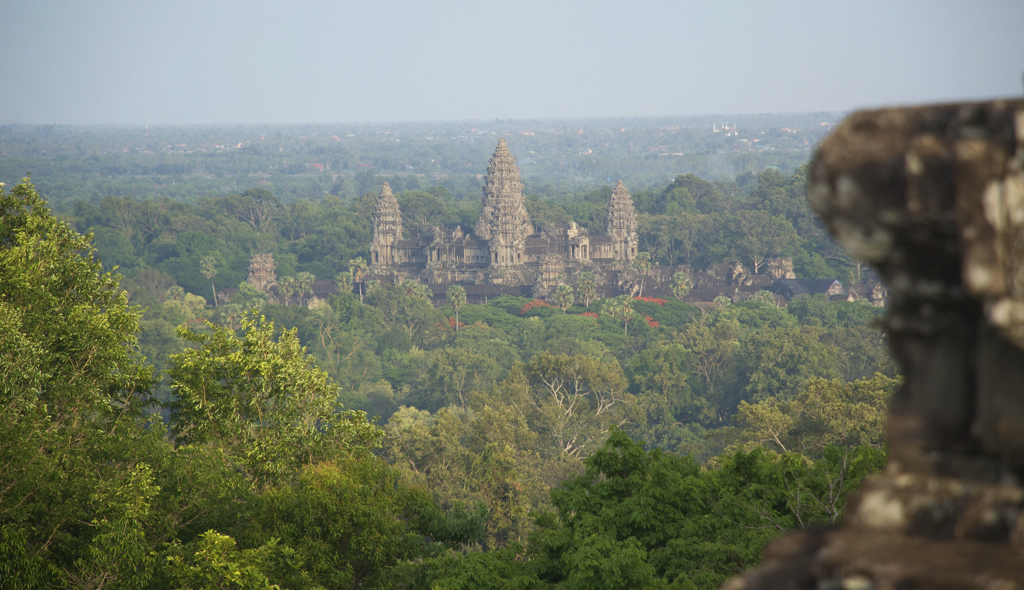 At the entrance to Angkor Wat (and pretty much everywhere else in Angkor) you’ll find plenty of hawkers selling drinks, snacks and all manner of tourists whatnots. You might also find English speaking tour guides of various skills and legitimacy. You don’t have to hire them, though they could be handy.

With massive trees growing atop once grand buildings, and their roots slowly cracking the stone floor, Ta Prohm is a touristic vision of a post-apocalyptic future. Another slightly spooky temple, thanks to the ever present serene face of the long dead King Jayavarman VII staring down at visitors from all angles, is Angkor Thom. If you want to be all cheesey then go check out the sunrise / sunset atop the mountain temple of Phnom Bakheng. It gets pretty busy up there, but the sun rising over Angkor Wat is almost unbearably beautiful. Your entry ticket will cost US$25 per day, or US$45 for a three day pass, and are to be hung around your neck at all times. 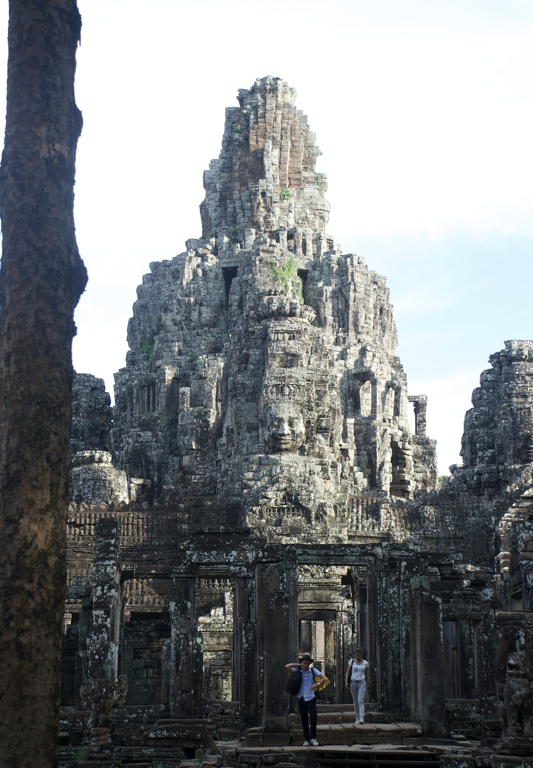 Getting around the temples is easy; literally every moto driver in town that catches a glimpse of you will offer to escort you around. They’ll likely offer to drive you to any restaurants, bars, or hotels around town, as well as the shooting range and the landmine museum slightly out of time. They’re all pretty friendly guys and charge roughly the same rates.

The Angkor National Museum is also worth checking out not only for its glorious air-conditioning, but also for its vast array of Angkorian artifacts and all the historical understanding you will likely acquire.

The francophiles among you will certainly want to check out Siem Reap’s Indochina architecture and cuisine in the centre of town near the Old Market. The narrow streets around there are lined with all manner of shops, restaurants, coffee shops, and bars to dine the night way. A favourite of mine is the Le Tigre de Papier, which serves up great Khmer and western food, and also doubles as a cooking school. Siem Reap isn’t much of a party town, but there are tonnes of lively bars, convinently located on Pub street, to strut in and down copious amounts of Angkor Beer.

Cambodia is still recovering the Khmer Rouge and their diabolical aspirations which deprived the country of roughly 2 million people in the late 1970s. Poverty and inequality is rampant across the country, including the temples around Angkor. You’ll likely come across little kids selling tourist trinkets for a couple dollars. It’s up to you whether you buy them, or give them sweets, gifts, food, or not. You might also consider donating to a charity (such as the Cambodian Children’s Fund) or volunteering.

A note from the Editor-in-Chimp: This article was originally posted here on Travel Wire Asia. Go and check them out, will ya! They have some great stuff

It was late in the autumn of 1592; the gravely outnumbered and perilously outgunned defenders ran out of bullets, cannonballs and arrows to fire…